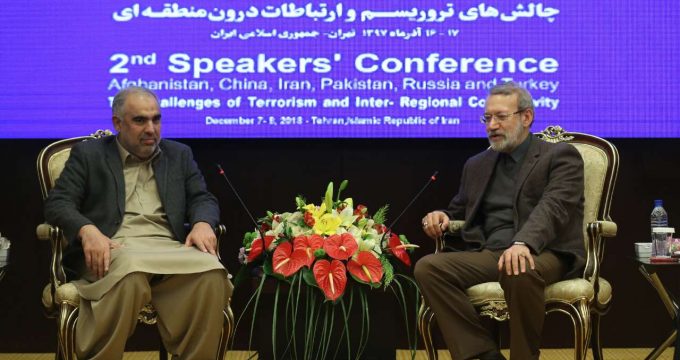 IRNA – Iranian Parliament (Majlis) Speaker Ali Larijani said on Friday that terrorists have damaged regional countries, calling for further cooperation between Iran and Pakistan in the fight against terrorism.

He made the remarks in a meeting with the Speaker of the National Assembly of Pakistan Asad Qaiser who is in Iran to attend the second edition of an international gathering of Parliament speakers from Afghanistan, Iran, Pakistan, Turkey, China and Russia on fight against terrorism and expansion of inter-regional ties.

Congratulating Qaiser on his election as speaker, Larijani hoped that the two countries’ parliamentary cooperation would improve.

Noting that Pakistan and Iran are friendly and neighboring states, he added, “Their cooperation should bolster in the economic field, in addition to the fight against terrorism.”

Stressing the need for promoting cooperation in the field of tourism, Larijani said that the two countries boast of good capacities which should be used in line with boosting bilateral relations.

Qaiser, for his part, appreciated Iran for hosting the event and expressed grief over terror attack in Chabahar which killed two Iranians and injured at least 40 others.

“Iran and Pakistan are brotherly and neighboring states and we honor having ties with it,” he said.

Stressing the need for promoting bilateral relations, he said that Pakistan favors uprooting terrorism which requires all-out cooperation among all the countries.

“I hoped that we would able to take steps in line with eliminating terrorism and developing bilateral ties during the ongoing conference,” he said.