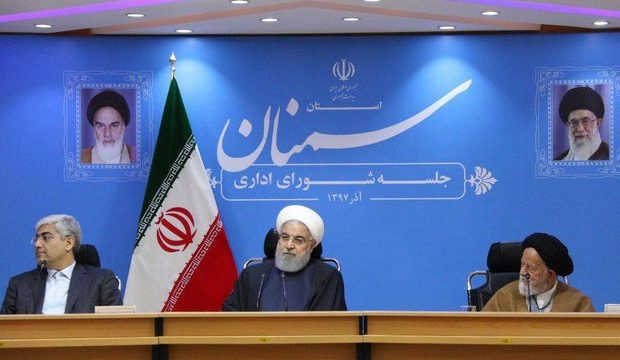 President.ir – Speaking at the meeting Administrative Council of Semnan Province on Wednesday, Dr Hassan Rouhani said, “The government has nothing behind the curtains. The key foreign policy decisions are discussed in the Supreme National Security Council and coordinated with the Supreme Leader”.

Stating that the people of Semnan welcoming the government warmly disappointed the enemies, he continued, “As I have said before, when our diplomats were negotiating, the passionate welcoming of Isfahan people from the government surprised the US Secretary of State”.

It is important to let the world know that we are all together, added Rouhani saying, “Having disagreements is natural in a family, but they are all members of one family and if they feel that an enemy is aiming for their home, they will stand together”.

“Today, we need to join hands and stand together,” he continued, adding, “I have no doubt that the people of Iran will overcome these problems and hardships”.

He also said that the government knows that people are going through problems in their lives, and continued, “If we didn’t stand against the cruel enemy during the Sacred Defence era, nobody knows what would happen to our country”.

The President also said, “Today, the people will overcome all the issues and problems that the enemies of the Iranian nation, especially the United States and the Zionist Regime, have created for us”.

“The enemies of the Iranian nation are going through a great failure because of failing to reach their goals in the region, Afghanistan, Iraq, Syria and Lebanon, and this is why they are mad at the Iranian nation”.

They have no choice but to surrender to the united Iranian nation, said Rouhani, adding, “People did a great job and the government is proud of being a part of this nation”.

Stating that the legitimacy of the government comes from people’s votes, he added, “The enemies are afraid of democracy in Iran and it is far beyond what they can tolerate”.

President Rouhani also said that the threats of the sanctions era must be turned into opportunity, saying, “Of course, this is not easy, being one of the most complicated strategic measures in the world, but I believe that the Iranian nation are able to do this”.

“Of course, we can choose another way and respond positively to the Americans, but in that case, there will be no dignity, independence, democracy and great Iran,” he continued.

Dr Rouhani added, “Americans are very keen on this and keep sending messages from different channels for holding negotiations, while it is the choice of the people and we have fought hard for our independence during the Islamic Movement”.

The President of the Islamic Republic of Iran also went on to say, “Today in Iran, there is exemplary security because of the devotion and self-sacrifice of the armed forces and warriors, and Iran is definitely more secure than Europe and other countries of the Middle East”.

“Even if the US surrenders to what is right, we will negotiate with them too. As we have negotiated before during the nuclear talks, we may talk today if the condition is ripe,” he added.

He continued, “Nobody should think that the government is doing things behind the curtains. The key foreign policy decisions are discussed in the Supreme National Security Council and coordinated with the Supreme Leader”.

“We have said it out loud that if Europeans want to talk about our country’s defensive power, it is not acceptable for us, because our defensive power is to defend the country and we will not discuss this with anybody”.