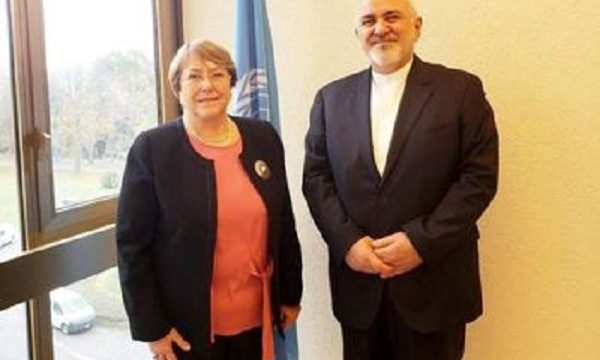 MNA – Iranian Foreign Minister Mohammad Javad Zarif on Tue. held talks with the UN High Commissioner for Human Rights Michelle Bachelet in the Swiss city of Geneva on the sidelines of a UN-backed international conference on Afghanistan.

According to the official website of Iranian Foreign Ministry, during the meeting, the Iranian diplomat referred to Iran’s reliance on its domestic public support as the only sustainable factor in preserving its national security, and said respecting the principles of human rights is not only an ethical commitment but also a national security requirement.

Zarif then expressed regret over the instrumental use of the concept of human rights and the abuse of the UN’s human rights mechanism as a means of exerting pressure on independent states.

He also denounced any arbitrary issuance of human rights resolutions against the Islamic Republic.

He then took a jab at the unilateral, illegal and brutal sanctionsimposed by the US against the Iranian people, and described it as a stark violation of human rights. He also appreciated the good stances of the UN’s special rapporteur on unilateral coercive measures.

For her part, the UN High Commissioner for Human Rightsexpressed her satisfaction with the meeting and announced her preparedness to establish constructive and useful interaction with the Islamic Republic.

The Iranian Foreign Minister Mohammad Javad Zarif is in the Swiss city of Geneva to attend a ministerial conference on Afghanistan, co-chaired by the Afghan Government and the UN.

Yesterday afternoon, the Iranian Foreign Ministry Spokesman Bahram Ghasemi said in a statement that in addition to attending the important international conference, Foreign Minister Zarif was planned to meet and hold talks with several international officials and political figures including the High Commissioner for Human Rights, EU Foreign Policy Chief Federica Mogherini, the president and chief executive officer of Afghanistan, WIPO general director, and some other foreign authorities.