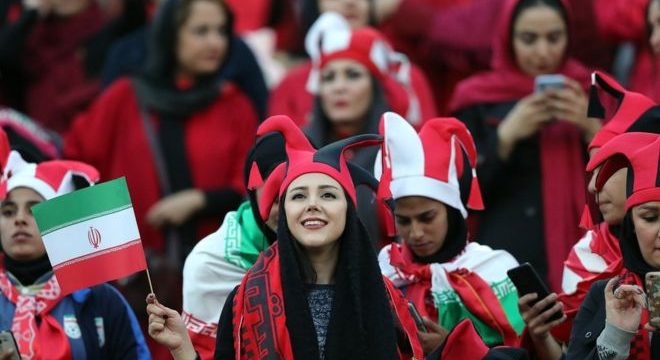 Reuters – Global soccer body FIFA has been urged by its own human rights advisory panel to give Iran a deadline for allowing women to watch soccer matches.

In a report published Monday, the panel said that Iran’s ban on women fans violated FIFA’s own ethics code which “specifically prohibits discrimination including on the basis of gender”.

Iranian women and girls have not been allowed to attend any men’s sporting events in the country for much of the 39 years since the Islamic revolution, and have not been granted access to matches involving top clubs since 1981.

However, this month, Iranian news agencies reported that an unspecified number of local women were allowed to attend the Asian Champions League final between home side Persepolis and Japan’s Kashima Antlers at Tehran’s Azadi stadium.

FIFA’s panel, made up of eight independent experts from the United Nations, trade unions and FIFA sponsors, also noted that women were able to attend screenings at the same venue of two of Iran’s matches during the World Cup.

It described this as a “positive” development but added that “these ad hoc decisions are obviously not the same as a formal end to the ban”.

The panel said “FIFA should be explicit about the timeframe in which it expects (Iran) to align with FIFA’s human rights expectations”.

It said FIFA should also be clear about possible sanctions should Iran not fall into line.

FIFA statutes say that discrimination can be punishable by “suspension or expulsion” although its disciplinary code allows for lighter sanctions such as fines and partial stadium closures.

The panel also recommended that FIFA give more detail about decisions taken by its ethics committee, which has banned dozens of football officials over past few years including former FIFA president Sepp Blatter.

At present, it said, FIFA only published “a few sentences that refer to clauses in the Ethics Code but do not give any detailed explanation about the merits of a case”.

“This lack of transparency means that the public cannot understand the specific reasons for sanctioning, and decisions and sanctions cannot meaningfully be compared,” it said.