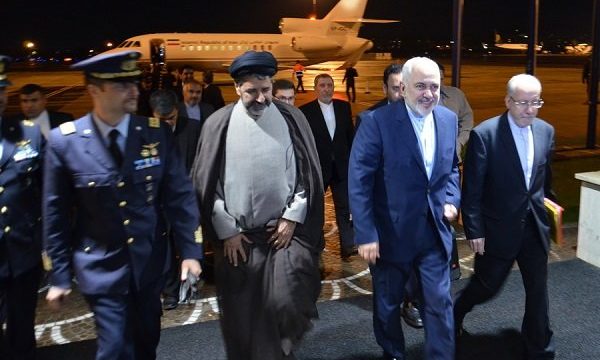 MNA – Upon arrival in the Italian capital Wed. evening to attend the 4th Mediterranean Dialogues, Foreign Minister Zarif said the focus of his trip is to discuss Iran’s stance on the dangerous situation of the Middle East.

Iranian Minister of Foreign Affairs Mohammad Javad Zarif arrived in the Italian capital on Wednesday evening to attend the 4th edition of Mediterranean Dialogues (Rome MED 2018) and hold talks with a number of his foreign counterparts.

Upon arrival at the Ciampino airport in Rome, Zarif told reporters that “the annual Mediterranean Dialogues summit is a good opportunity to clarify the country’s position on the very dangerous situation in the Middle East, in particular the United States’ nationalist policies and the status of extremism and terrorism.”

Zarif emphasized that the summit is an opportunity for the Islamic Republic to discuss regional issues, adding “my speeches at the Thursday summit will mostly focus on the issues in the region.”

He added, “of course, my colleagues will deliver speeches on the JCPOA on Friday.”

The Iranian foreign minister also said that on the sidelines of the summit, he and his accompanying delegation will hold talks with some Italian officials as well as other participants at the conference. There will also be talks with Iranians residing in Italy, businessmen and Italian entrepreneurs, he added.

Zarif maintained that he would hold talks with the Italians about the EU’s promised financial mechanism for facilitating trade with Iran; “Ms. Mogherini was scheduled to attend the summit, but due to an unexpected trip she will not be able to take part in the event,” said Zarif, adding that the EU foreign policy chief will probably be present at the Afghanistan summit in Geneva next week.