A Look at Iranian Newspaper Front Pages on November 22

Iran Front Page – IFP has taken a look at the front pages of Iranian newspapers on Thursday, November 22, 2018, and picked headlines from 14 of them. IFP has simply translated the headlines and does not vouch for their accuracy.

Almost all papers today highlighted President Hassan Rouhani’s support for Foreign Minister Mohammad Javad Zarif over his controversial remarks about ‘rampant’ money laundering in Iran, which were going to lead to his impeachment.

Also a top story was the pressures on Interior Minister Abdolreza Rahmani Fazli to reject the qualification of Pirouz Hanachi, the reformist figure elected as new mayor of Tehran. Hanachi must be approved by Rahmani Fazli in order to be able to start his work. Vice-Speaker of Parliament Ali Motahari warned on Wednesday that the interior minister could be impeached if he gives in to pressures.

1- Iran Has Remained in JCPOA upon Europe’s Insistence: Foreign Ministry 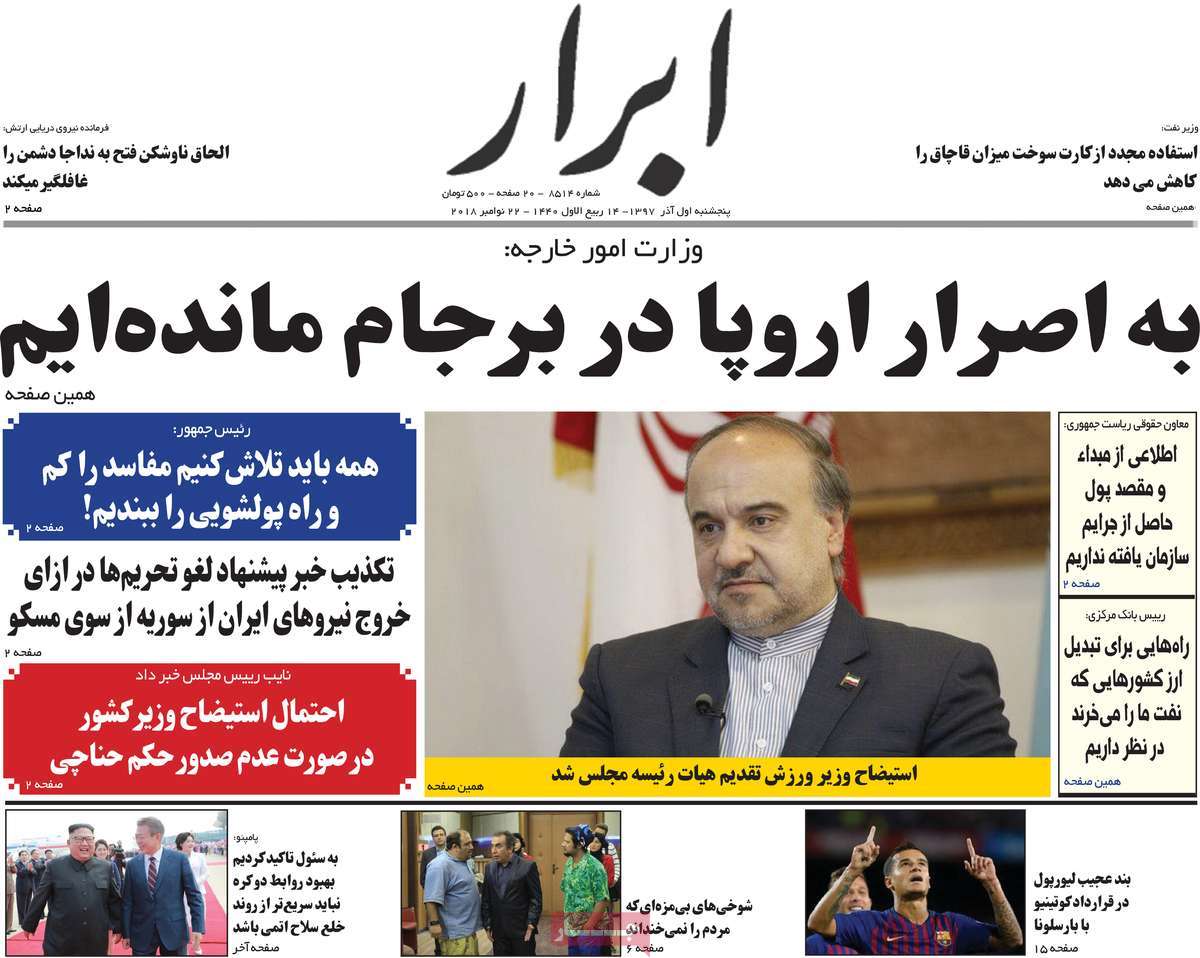 1- An Entire Iran behind Zarif

* Rouhani, Many Officials, Reformists Throw Their Weight behind FM Zarif

2- If a Journalist in Saudi Arabia Writes about Khashoggi, He’d Be Killed 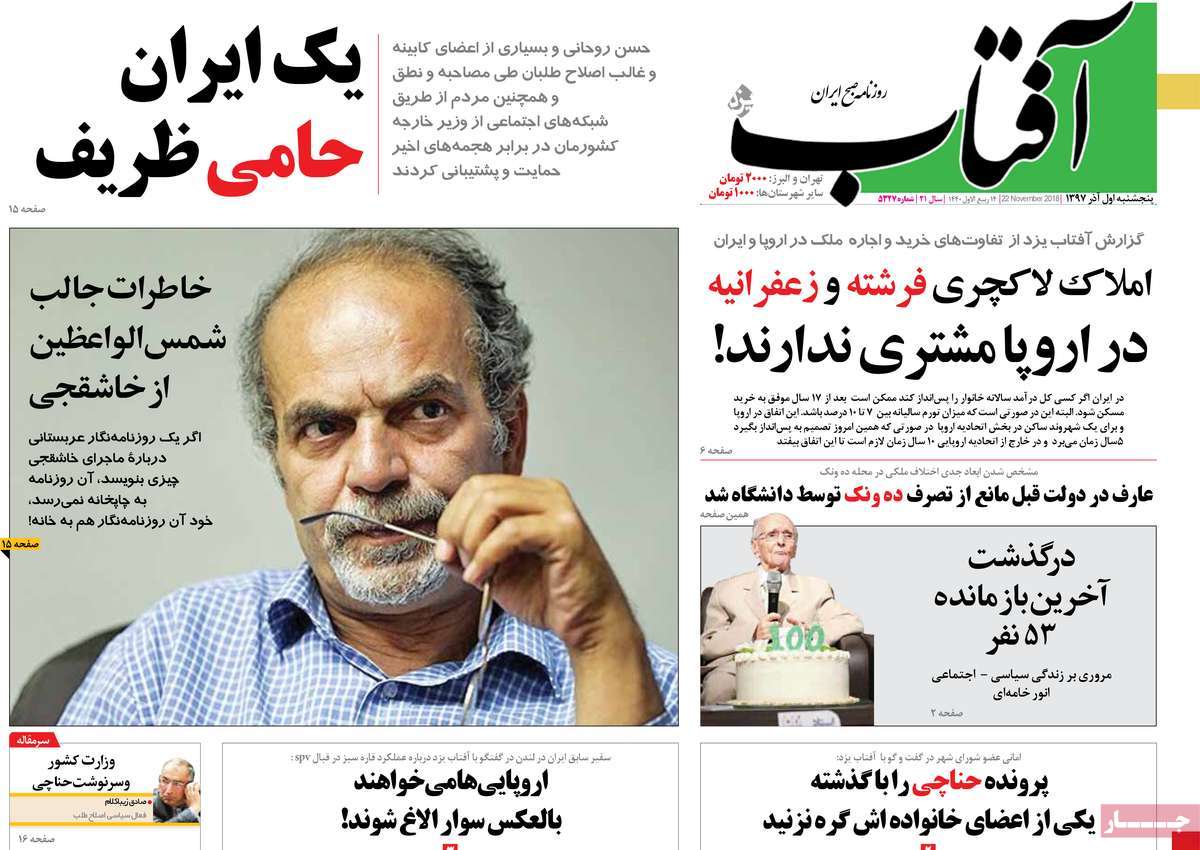 1- Will Profiteers Return with Re-Imposition of Sanctions? 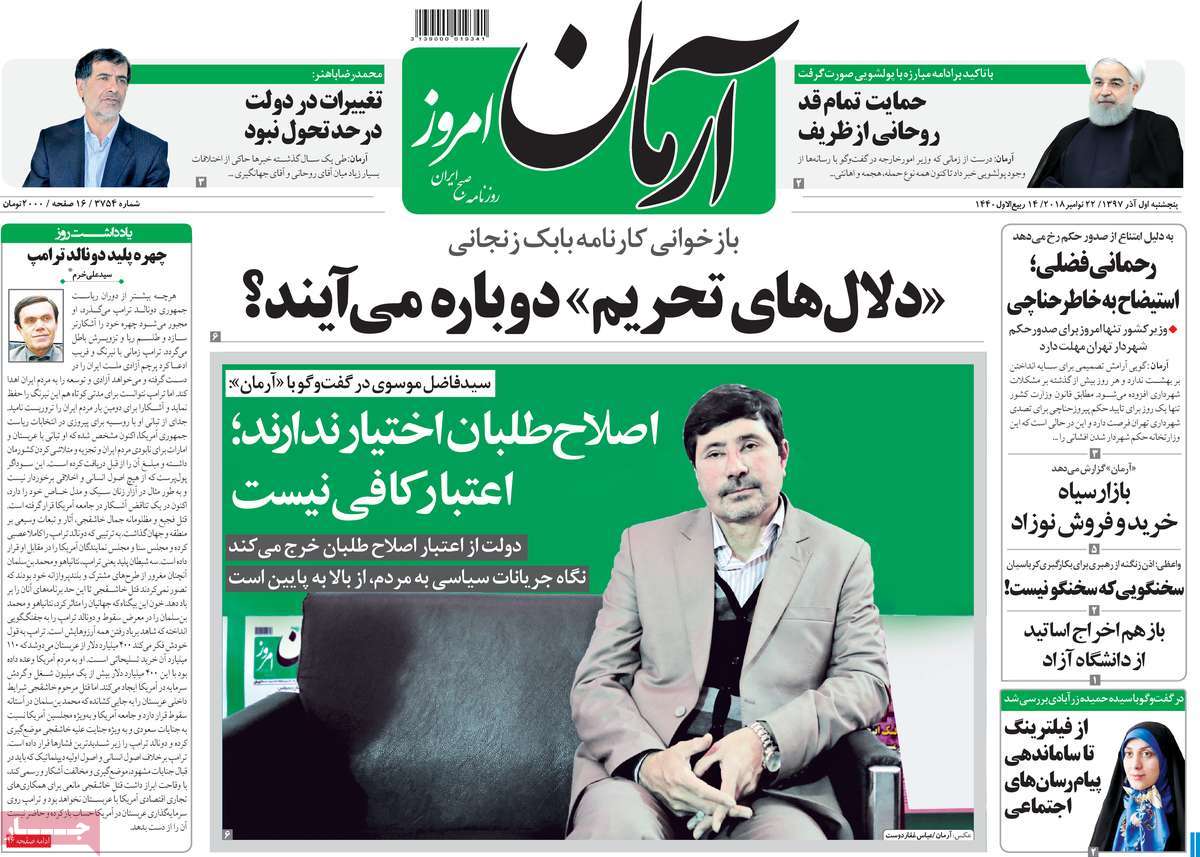 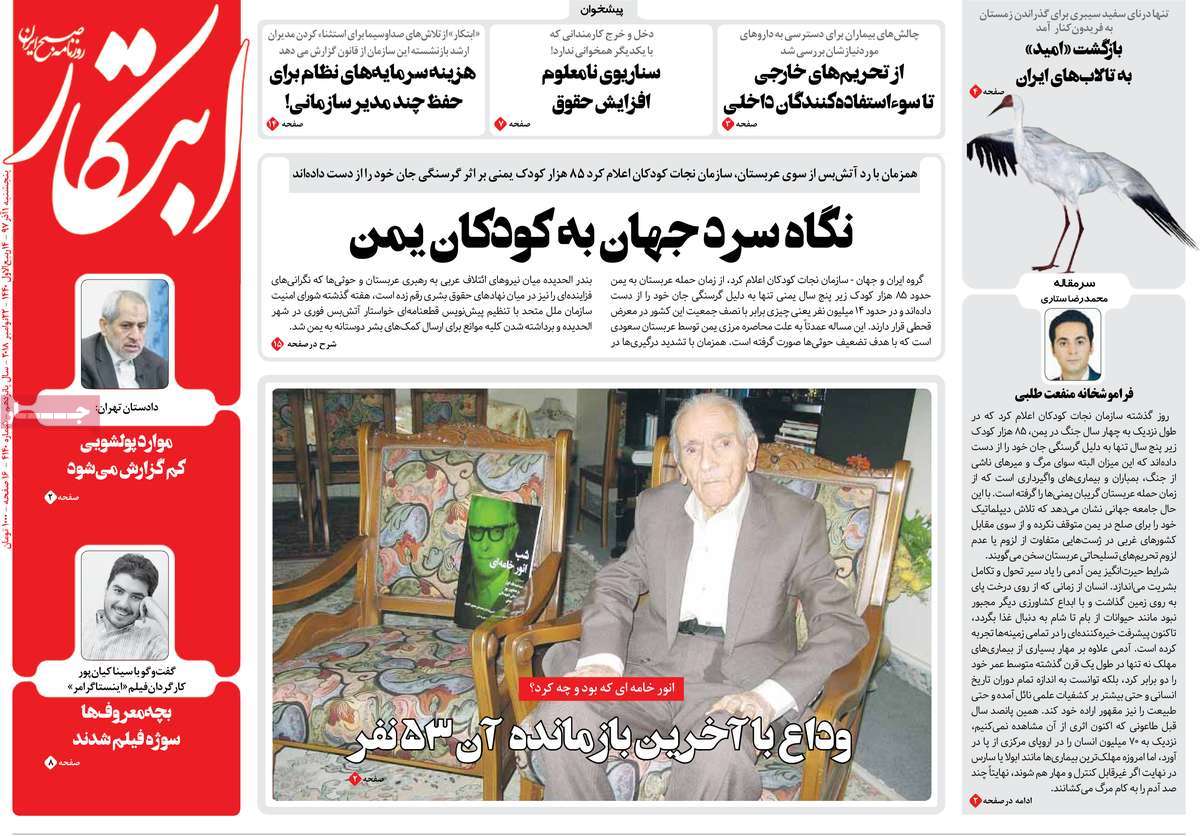 1- New Mayor of Tehran under Pressure to Resign

* Vice-Speaker to Interior Minister: Don’t Give in to Pressures; Approve Hanachi 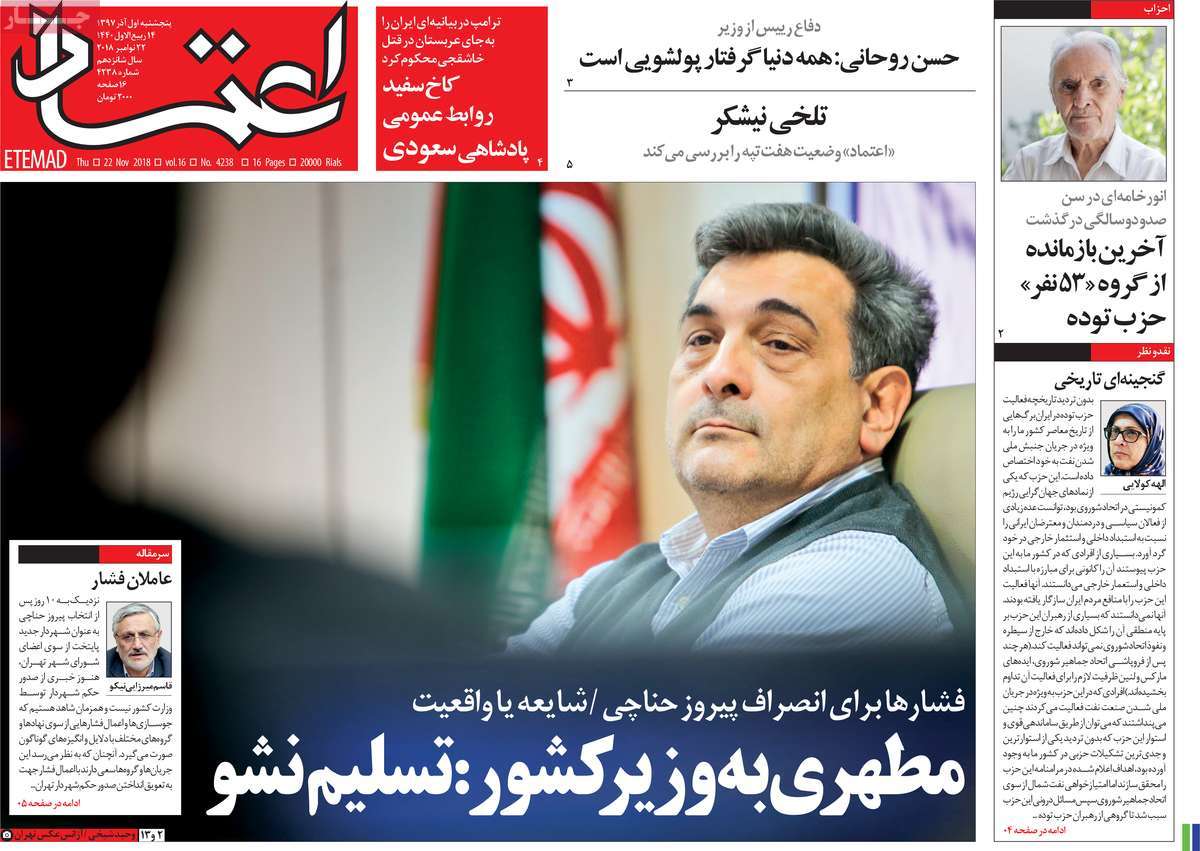 1- Rouhani: We Should Close Doors to Money Laundering, Corruption

* Even Rouhani Advised Zarif Not to Politicize Fight against Money Laundering 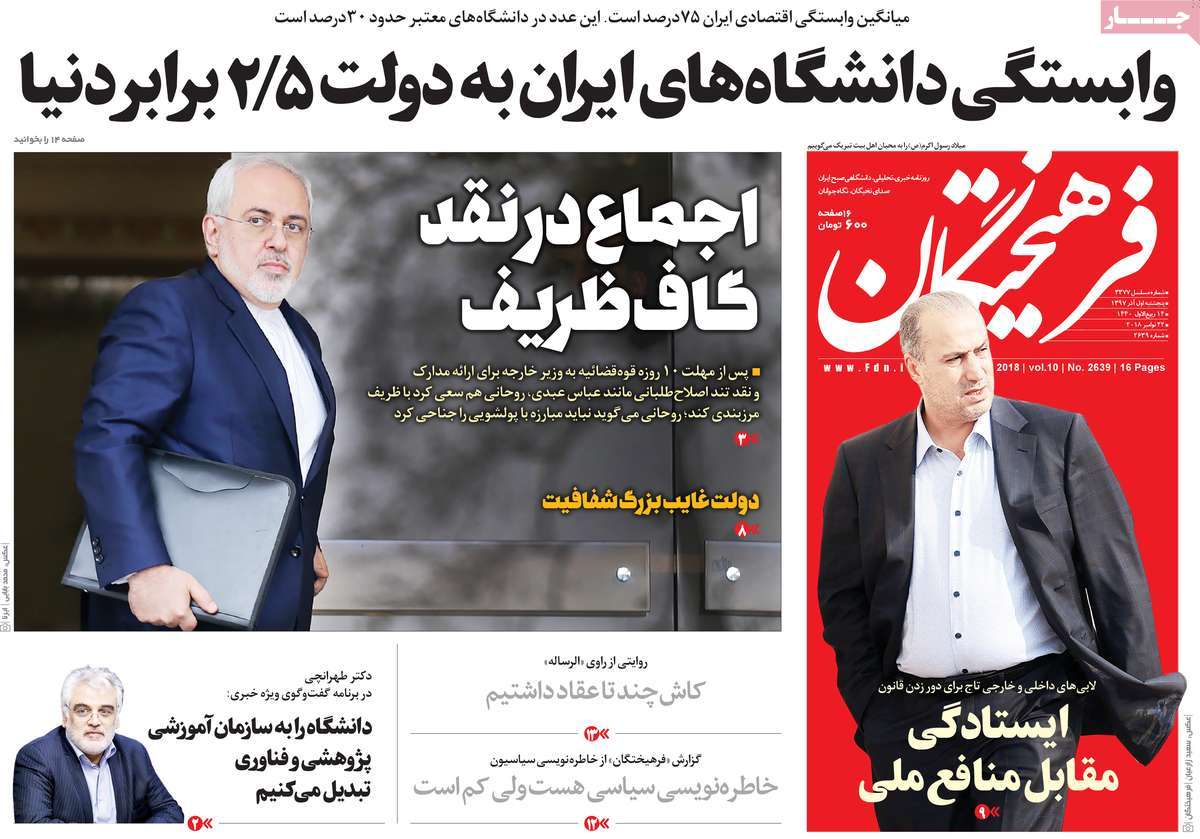 1- Taboo of Sex Education for Children to Be Broken 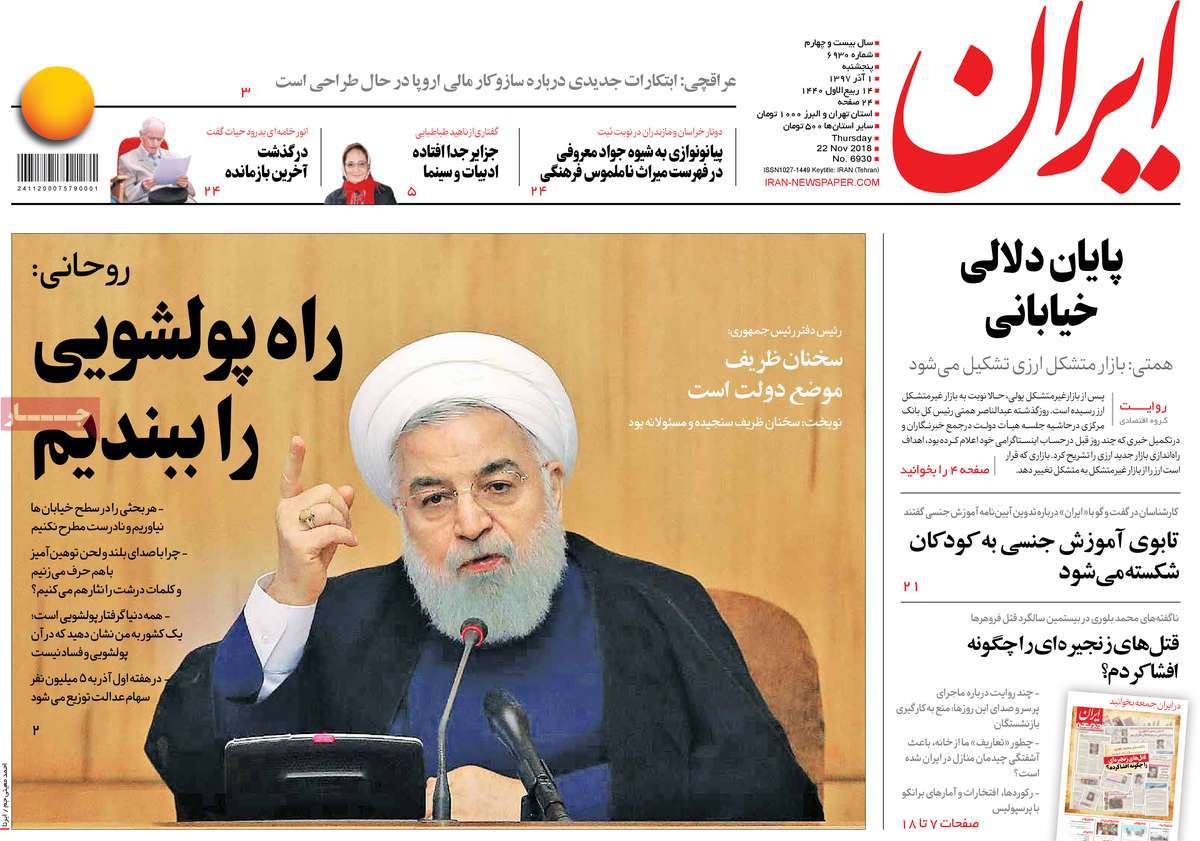 2- Trump on Bin Salman’s Murder of Khashoggi: It Is What It Is! 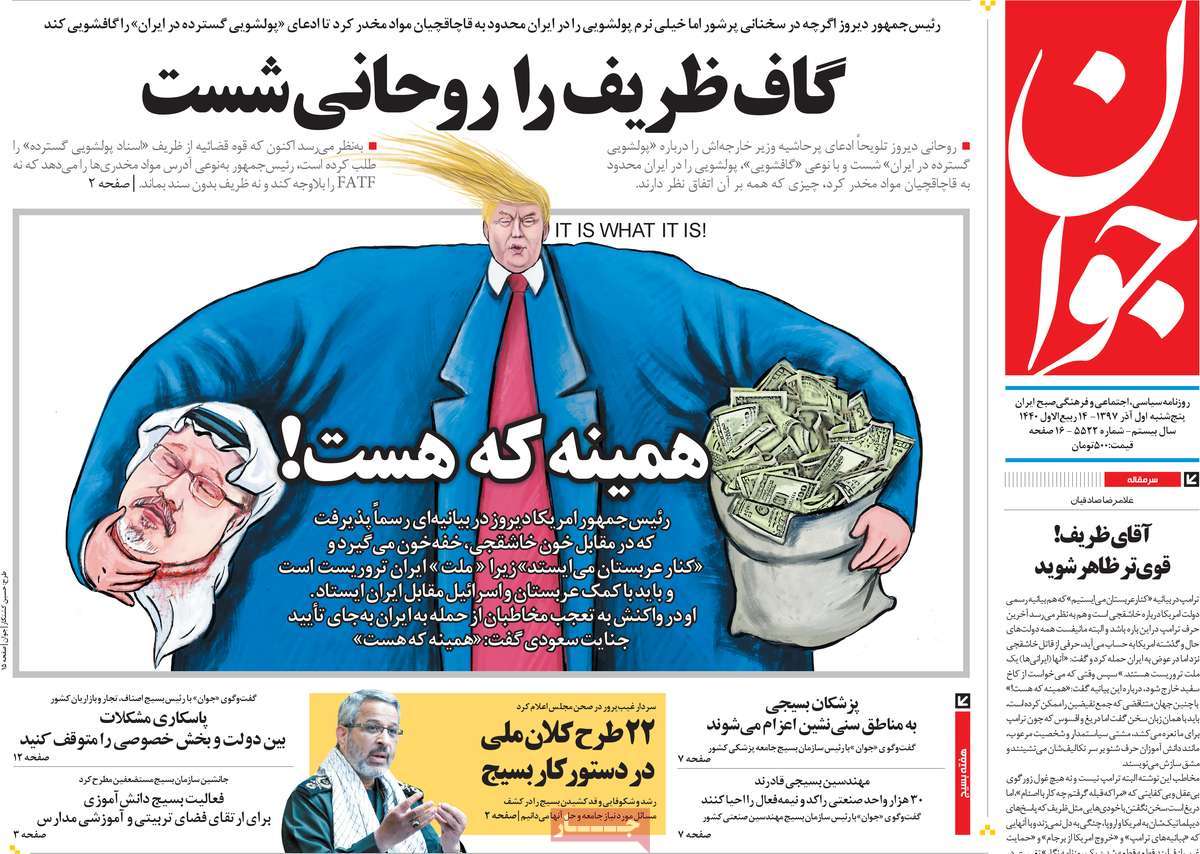 (Haft-Tappeh is a privatized factory whose workers have gone on strike, demanding their overdue wages, and calling on government to retake the factory)

5- Mr Hunt! Your Crimes Have Led to Current Misery of Innocent Yemeni Children 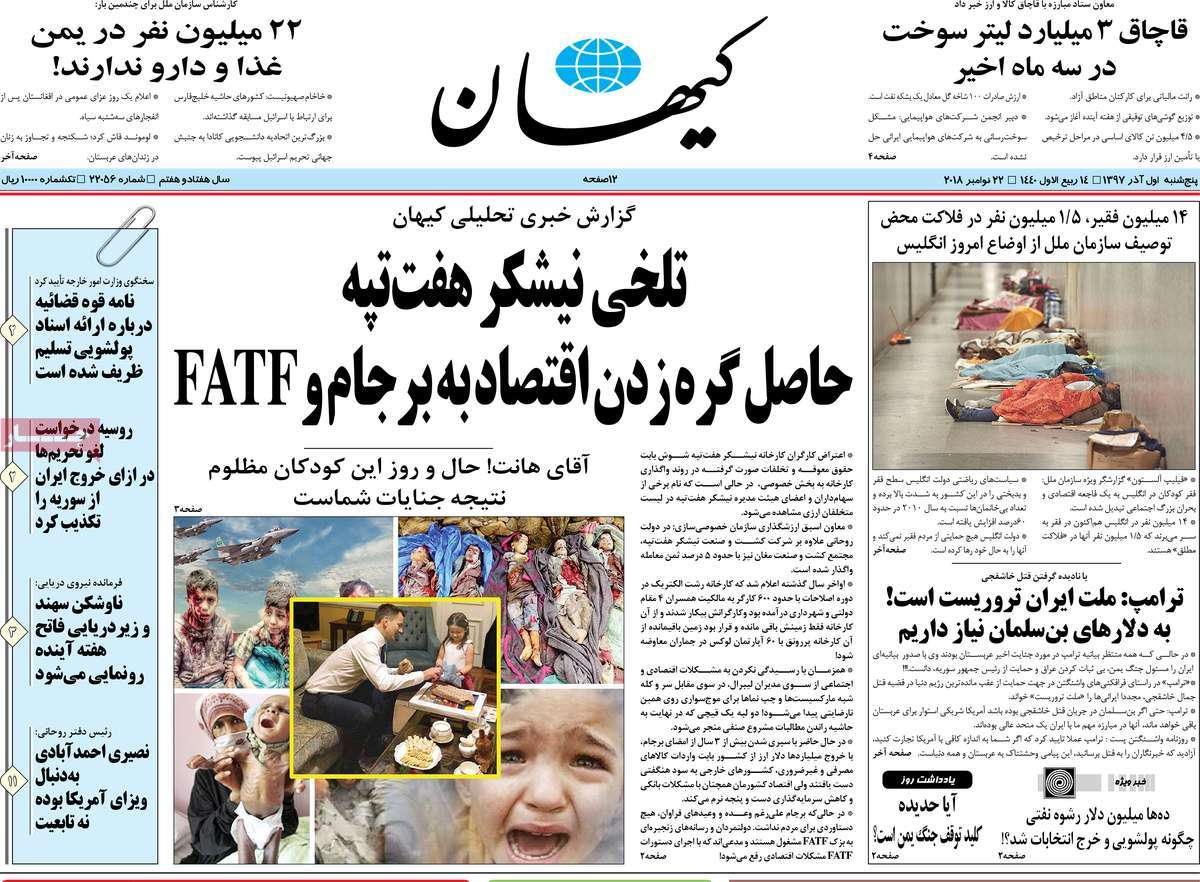 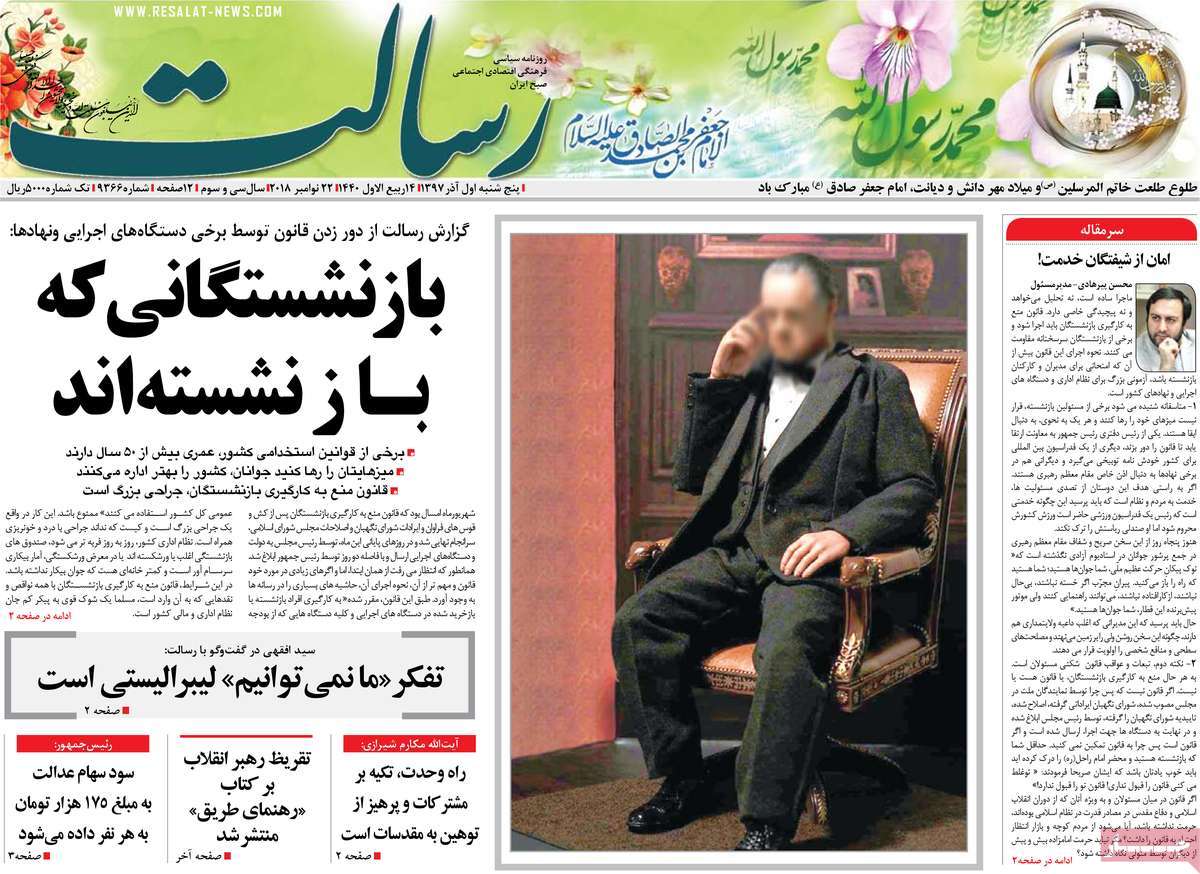 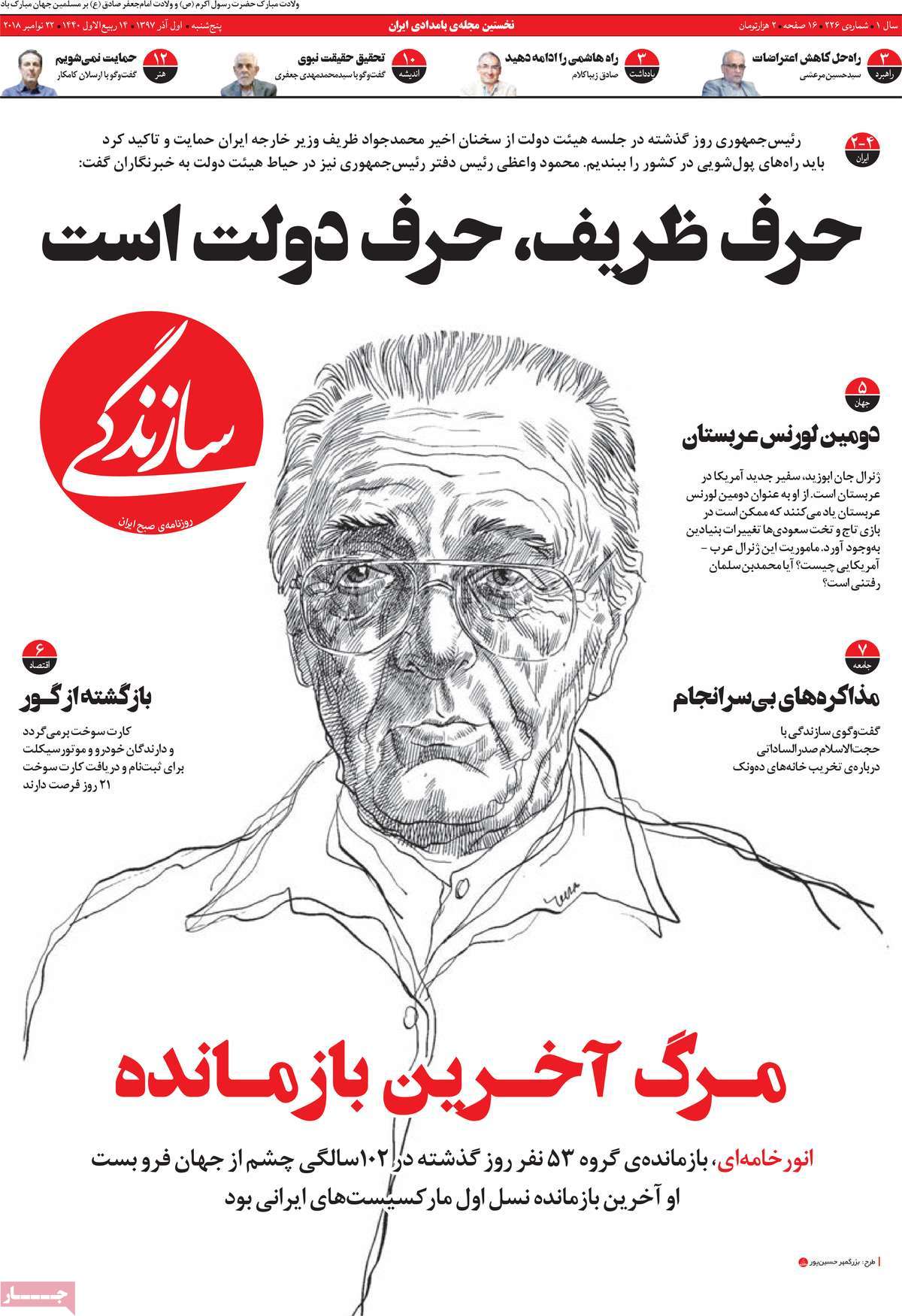 * Why Should We Fight over Crystal-Clear Issues? 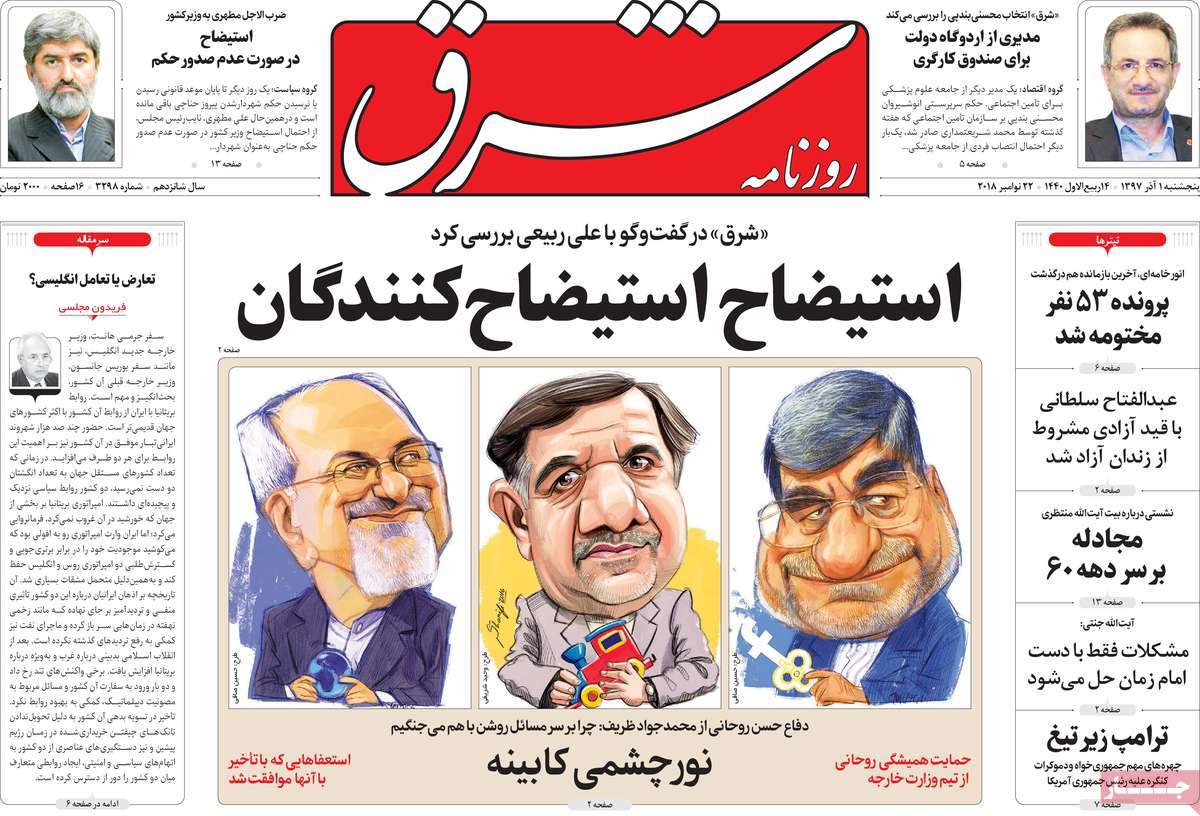 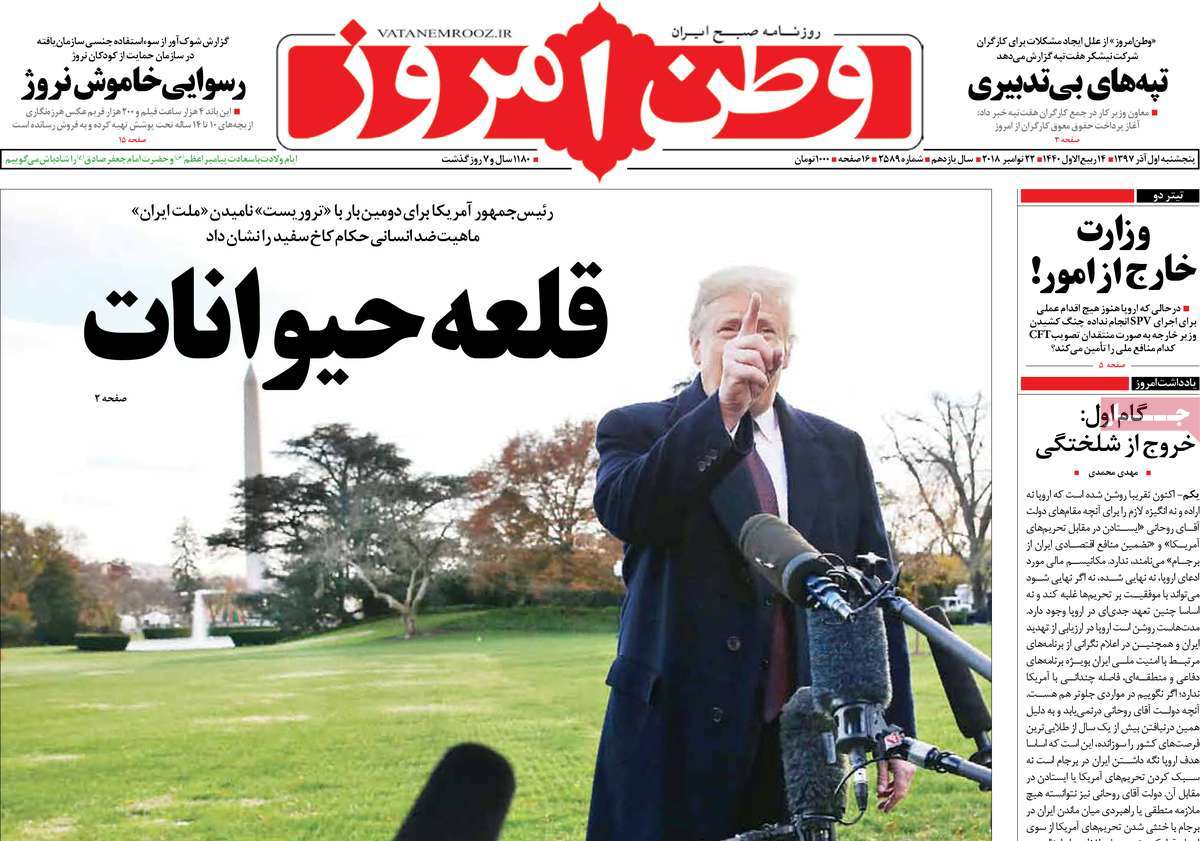