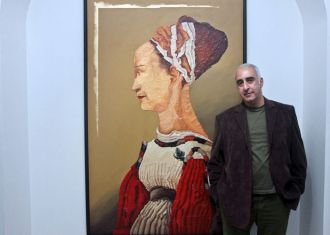 The world was catching on to Iran’s contemporary art. Then sanctions returned

Bloomberg | James Tarmy: In theory, the devaluation of the Iranian rial this year—to date, the currency has lost about 70 percent of its value against the dollar—should have been good for Hormoz Hematian.

The founder of Tehran’s contemporary art gallery Dastan’s Basement, Hematian spends a significant portion of his time traveling the world to show his artists’ paintings, sculpture, and installations to an international audience; he’s been to six different fairs or exhibitions in 2018 alone. So once the rial plummeted to a third of what it was just months before after Donald Trump resurrected oil sanctions on Iran, by maintaining art prices in foreign countries (and currencies) Hematian’s gallery should have been able to triple its profits.

But the opposite is true. Despite Hematian’s aggressive international sales efforts, more than 80 percent of his clientele is still at home. “The majority of our market is definitely inside Iran, it’s not even a question,” he says. “We’d like it to be more than just inside the country, but it really is a kind of wait-and-see situation.” As a consequence, Hamatian is squeezed on both ends: The costs of traveling and selling abroad have tripled, while the discretionary spending power of his collectors at home has plummeted.

Hematian’s predicament is emblematic of many of Iran’s contemporary art dealers, who began to thrive in the late 2000s as the country’s intellectual and artistic class (including such artists as Farhad Moshiri, whose work has sold for more than $1 million at auction) began to emerge on the international stage. “In the last 15 years, there’s been tremendous interest,” says New York and Dubai-based dealer Leila Heller, whose gallery represents star Iranian artists, including Shoja Azari and Y.Z. Kami.

But geopolitics have overtaken the Iranian creative class’s efforts to expand into the outside world. “I used to go to six or eight fairs a year,” says Shirin Partovi, who founded her gallery in Tehran in 2005. “Probably now, it’s going to be one or two.” Earlier this year, she pulled out of a fair, Contemporary Istanbul, at the last minute, when she realized she’d never be able to make up the cost of attending. “Look at the Abu Dhabi art fair,” she says. “My expenses are $50,000; last year that meant much less [against the rial]. But my income is still in rials.”

This week, the International Monetary Fund projected that the Iranian economy would fall into recession.

As a consequence, Iran-based dealers, long on the frontline of the country’s cultural outreach, have begun to pull back in order to cut costs. “They’re having a really hard time,” says Heller. “Look at [the art fair] Art Dubai: Usually there’s four or five galleries from Iran, and now there’s just Hormoz. It’s really sad.”

If it were merely a question of tamping down ambition and reconciling himself to a regional collector base, Hematian might be fine. But it’s not that simple, he says, simply because so much of the point of his gallery, and his artists’ work, is to present Iranian art to the rest of the world. “I never show art that depicts Iranians as restricted,” he says. “I refuse to show something like that. We’re trying to show [ourselves] as part of the global community of the art world and to work within that discourse.”

Hematian’s grandfather was a general before the revolution; after the Shah was overthrown, he left the military and became a self-taught, amateur artist. “Whenever I’d visit him, he’d show us what he was working on, and there was a certain magic to it,” Hematian says.

He worked in an office that he describes as “quite large” and—inspired partially by his grandfather and partially by the magazine Lapham’s Quarterly—Hematian decided that it would be a fun side project to open a venue that combined “history, art, and literature in a physical space.” He applied for a gallery permit and got one. “It was as simple as that,” he says.

Since then, the gallery has grown to encompass four exhibition spaces around the city. “Iranian contemporary art is currently in a really exciting place,” he says. “It would be too bad not to show it as much as possible.”

People in the West might have a perception of Iran as repressive, but in the aftermath of the 1979 revolution, many Iranians inside and outside the country maintained (and amassed) significant collections of Iranian art.

One of the most famous is that of Mohammed Afkhami, who was born in Switzerland to Iranian parents; it includes more than 400 works by modern and contemporary Iranian artists. “Basically, contemporary and modern art in Iran started in the 1960s and gained momentum until it came to a complete halt after the revolution and the eight-year war,” Hematian says. “But then it restarted several years later.”

In Hematian’s telling, the contemporary art world occupies an easy, generally acceptable gray area in the country’s cultural ecosystem. “You cannot show things that are not according to Islamic regulation,” he explains. “So you cannot show nudity at all.” He says people should think about the other restrictions as if they’re imposed by “a very conservative grandmother: If she’d really frown on it, like there’s too much profanity or sexuality, then you probably can’t show it.”

When in doubt, he says, he runs the art he’ll exhibit by a section of the government that handles visual art. “We’ll send it ahead of time for approval,” he says; generally speaking, he knows “what we can and can’t show and don’t take risks.” Criticism of the government is off-limits, as are depictions of sexuality (heterosexual or otherwise).

These restrictions, he says, don’t bother him or his artists at all. “So, it might not be a direct display of sexuality, but people have basically have deeper ways of discussing such matters,” he says. “One of the reasons that Iranian art is so interesting is that people have to go back to more fundamental matters, “ he continues. “So, ok, you can’t drink alcohol— I don’t know if there’s a need for an artwork to get that across.” Instead, he says, the goal is to show “what Iranian art is heir to, and how we can make the world a better place.” His artist Sam Samiee, for instance, uses subject matter from Persian literature in his paintings; Farah Ossouli, whose work is in the permanent collections of museums including the Metropolitan Museum of Art in New York and the Ludwig Museum in Koblenz, Germany, draws on the tradition of Persian miniature painting.

When he founded the gallery in 2012, Hematian was mostly trying to introduce his friends and peers to a younger generation of artists. Galleries in Tehran were mostly selling historical art. “I think one of the reasons there wasn’t much contemporary art sold was that there weren’t many young gallerists,” he says. “As a result, people were pretty disconnected from artists in their 20s.”

Hematian started by selling drawings for about $100 and paintings for less than $1,000.

Very quickly though, he discovered—stumbled, he says—into the world of Iranian collectors, who not only had been building collections for “decades” but were particularly interested in supporting a younger generation of artists.

Simultaneously, the Iranian artists he represented began to be recognized on the international stage. Sam Samiee won the dutch  Royal Award for Modern Painting in 2016, and had an artwork in the most recent Berlin Biennale. His work sells for about €10,000 to €12,000 ($11,300 to $13,500).

The collective Peybak, which Dastan’s Basement co-represents, just sold a work to the Fondation Louis Vuitton, Hematian says; large pieces by the collective sell for as much as €20,000 euros. Nariman Farrokhi, whose work Hematian exhibited in his booth at Artissima this year, was recently added to to the permanent collection of the British Museum, he says; Farrokhi’s work sells for less than €5,000.

By bringing his artists around the world and putting them in such prominent fairs as Art Basel and Frieze New York, Hematian has helped them reach a level of international prominence that he happily admits is even occasionally a surprise to him.

But that act of promotion, which was intended to make money, is now becoming something much harder to sustain. “The Rial just fell to 30 percent of what it was,” he says, so what was once $100 is now $30.” That has material consequences: “So when I want to get a hotel somewhere for $100, now it functionally will cost me $300 or $400,” he says.

The problem is compounded by the fact that Iranians in Iran generally suffer from macro-economic financial pressures. Inflation is rising, according to the report by the IMF, even as U.S. sanctions on the country’s crude oil exports threaten to destabilize the country’s budget.

Heller, the New York dealer, says that her Dubai gallery “has suffered tremendously since the currency dropped,” simply because Iranians aren’t buying. “Unfortunately, every aspect of the country is suffering,” she says.

Hematian doesn’t have an easy fix. In the meantime, he’ll continue to do his best to show works from his Iranian artists around the world. “I’ll try as hard as I can,” he says, “and for as long as I can.”