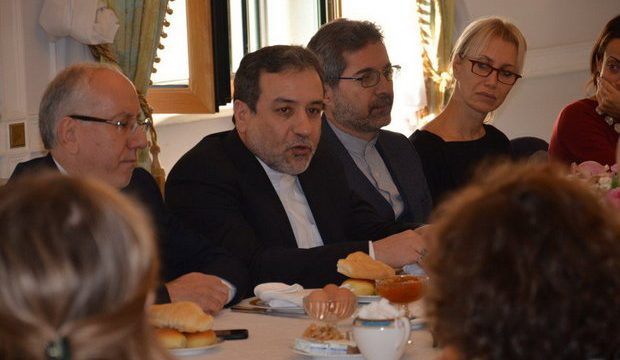 MNA – Iran’s Deputy Foreign Minister Abbas Araghchi has called on EU countries on Thursday to fulfill their economic obligations to facilitate trade with Iran in the face of US sanctions.

Araghchi reiterated Tehran’s adherence to the commitments of the 2015 nuclear deal, also known as the Joint Comprehensive Plan of Action (JCPOA), saying “it is time for Europe to fulfill its economic promises along with the political commitments.”

The Iranian official made the remarks during a meeting with senior Italian officials in Rome.

Discussion on the JCPOA and ways to preserve trade and economic cooperation between Iran and Italy in the face of US sanctions are part of the topics reviewed during his one-day visit to Italy.

Araghchi condemned the US’ unilateralism regarding the JCPOA as a clear violation of United Nations Security Council Resolution 2231.

He also emphasized the necessity of implementation of the ‘Special Purpose Vehicle’, as an effective mechanism proposed by the EU to keep financial interactions with Iran.

On May 8, the US as one of the signatories to JCPOA, unilaterally withdrew from the agreement and re-imposed economic sanctions on Iran, which had been lifted under the nuclear deal. Iran has stressed that it would continue to abide by the JCPOA as long as other parties and the EU could guarantee the country’s economic interests. For this purpose, the EU has been working on a financial mechanism, the so-called Special Purpose Vehicle, to facilitate trade transaction with Iran in the face of US sanctions.

In her latest remarks, EU Foreign Policy Chief Federica Mogherini said the international community has an obligation to maintain economic relations with Iran.

During a trip to Wellington, New Zealand, on Tuesday, she noted that Iran has been in compliance with its obligations under the agreement, which warrants reciprocal commitment.