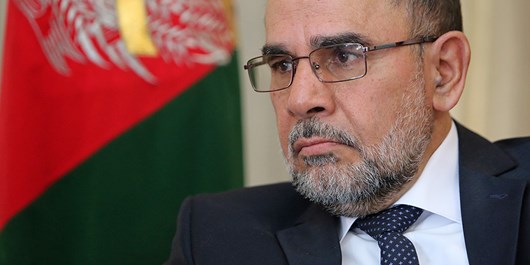 IRNA – Iran plays a constructive role in fight against terrorism in the region, the Afghan envoy to Iran said Monday.

Nassir Ahmad Noor in a meeting with Iran’s special advisor to the country’s Parliament speaker hailed Iran’s role in fight against terrorism and its contribution to security and stability in the region.

‘If the security and peace are strengthened in Afghanistan, the refugees will return to their country, the lives of innocent people are protected, human smuggling is prevented, and the borders would be safer,’ he said.

Terrorism roots, the ambassador said, are all the same and the sponsors are evident. The terrorists are still being fed by their supporters, Ahmad Noor said.

He also stressed the importance of regional cooperation and building trust among the neighboring countries, as well as prevention of outsiders’ presence in the region.

The diplomat expressed hope that Iran-Afghanistan relations be strengthened, particularly with a new parliament in the latter.

Afghanistan’s October parliamentary elections were the first in the past eight years being cancelled once in 2014 due to unstable security situation in the country.