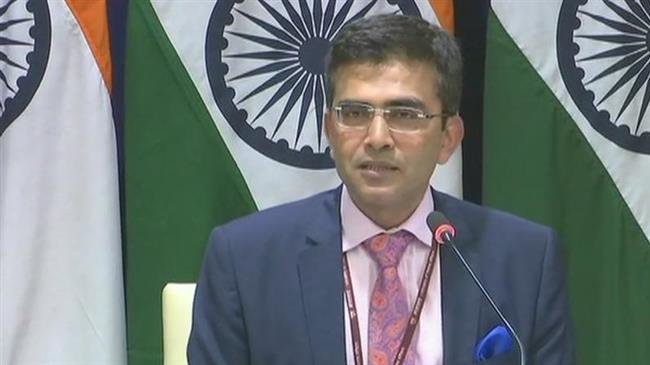 Press TV – India welcomes the United States’ decision to grant exemptions to the country to continue the import of Iranian crude oil despite re-imposition of sanctions on Iran, saying New Delhi is examining the details of the waivers.

“We appreciate the US government has taken into account our need for energy security. India is a major importer of crude from Iran and it is very important for our energy security requirement,” spokesperson of India’s Ministry of External Affairs Raveesh Kumar said on Friday in the country’s first reaction after the US waivers.

He did not give details about the quantum of oil which India will continue to import from Iran.

The administration of US President Donald Trump announced on Monday the re-imposition of the “toughest” sanctions ever against Iran’s banking and energy sectors with the aim of cutting off its oil sales and crucial exports. The bans had been lifted under the 2015 nuclear deal, officially known as the Joint Comprehensive Plan of Action (JCPOA).

Washington had been pushing governments to cut imports of Iranian oil to zero. However, it agreed to grant sanctions waivers to eight biggest importers of Iran’s oil — China, India, South Korea, Japan, Italy, Greece, Taiwan and Turkey — in fear of a price spike.

Elsewhere in the briefing, Kumar commended the US move to allow his country to develop an Iranian port for trade with Afghanistan.

“We have taken note of the US statement that exception has been provided under the Iran Freedom and Counter-Proliferation Act of 2012 with respect to the development of Chabahar port and the construction of an associate railway line. We appreciate that the US recognizes the role which this port will play to bring strategic and long term benefits to Afghanistan,” the spokesperson said.

Two Indian government sources said on Tuesday that New Delhi aims to sign an initial agreement with Tehran this month to settle all their oil trade in rupees through India’s UCO Bank.

Tehran has lodged a complaint with the International Maritime Organization (IMO) against the US over the re-imposition of sweeping sanctions, which target scores of Iranian ships as part of Washington’s much-criticized push to cut off the country’s oil exports.

In a tweet on Thursday, Iran’s Ambassador to London Hamid Baeidinejad said the diplomatic mission under his watch submitted a letter to the London-based body to voice Tehran’s protest at the return of the unlawful US sanctions.

As a specialized agency of the United Nations, the IMO — which has 174 member states — is tasked with regulating international shipping. The organization works to promote “safe, secure, environmentally sound, efficient and sustainable shipping through cooperation,” as its mission statement reads.

In an online video message on Tuesday, Iranian Foreign Minister Mohammad Javad Zarif lashed out at the United States for imposing “illegal and draconian” sanctions on Tehran, saying Washington would once again regret its “unwise measures.”

“The US administration appears to believe that imposing illegal, draconian sanctions on Iran will bring about such pain to our nation that it will force us to submit to its will no matter how absurd, unlawful or fundamentally flawed its demands are,” Zarif said.