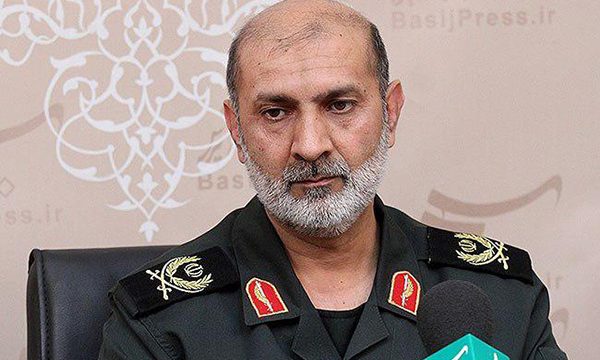 MNA – The political head of the Ideological-Political Bureau at the office of the Commander-in-Chief of Iran’s Armed Forces said Thu. that the recent remarks by the US Secretary of State Mike Pompeo against Major General Ghasem Soleimani will bring nothing but shame to the US government in the eyes of the oppressed people.

General Soleimani is a very popular figure among people of Iran and region and the recent positions of US Secretary of State Pompeo is ‘disgraceful’ for the US government, Brigadier General Mehdi Sanaeirad told Mehr News correspondent on Thursday.

He then noted Pompeo’s anti-Iran remarks in a joint press conference with the Secretary of Treasury Department Steven Mnuchin a couple of days ago, adding “Pompeo’s stance in this regard is the result of the US’ utter failure and defeat during the forty years since the glorious victory of the Islamic Revolution.”

The victories of the Axis of Resistance in Iraq and Syria under the wise management of Major General Soleimani have thwarted all plans and conspiracies of the United States in the region, so that the US government’s plans in the region are doomed to failure, he added.

Elsewhere in his remarks, Sanaeirad pointed to the recent stance of the US authorities on Yemen and added, “we are witnessing the retreat of the United States from their positions in Yemen, and this is the result of a shift in the balance in the region and the US considers Iran as the main factor behind it.”

Islamic Awakening and creation of Axis of Resistance prompted people of the region to reject the US domination, he said, adding, “of course, the US wrong strategies have imposed many failures on them.”