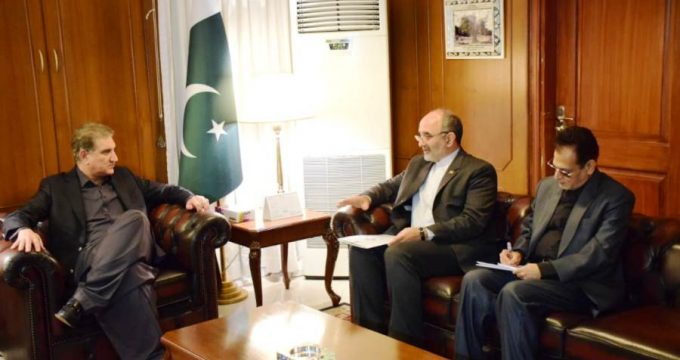 On October 16, Iran’s Islamic Revolution Guard Corps (IRGC) said terrorists had kidnapped the Iranian forces, including local Basij volunteer forces and border guards, near the town of Mirjaveh on the Pakistani border.

Pakistan has already assured Iran of its full cooperation to recover the Iranian border guards safely.

Both sides during the meeting which was held at Pakistan’s foreign ministry, emphasized to further strengthened bilateral ties in all areas. The ambassador told Pakistani foreign minister that his country attaches great value to its ties with Pakistan.

They also discussed regional and international development with special focus on regional security.

Pakistani Foreign Minister Shah Mehmood Qureshi expressing his views said that Iran is an important neighbor of Pakistan and Pakistan always desires to enhance its relations with the Islamic Republic.

The two sides exchanged views on matter of mutual interest, including bilateral cooperation. They also emphasized on strengthening of trade and cultural cooperation between the two countries.

They also reviewed progress on the issue of abducted border guards.

Mr Zarif during the conversation had asked the Pakistani government to enhance security along the border by increasing troops deployment and other measures.

The Iranian foreign minister had also urged the Pakistani authorities to act swiftly to recover the hostages and arrest the elements behind the terrorist incident in accordance with “the previous understandings” between the two countries.