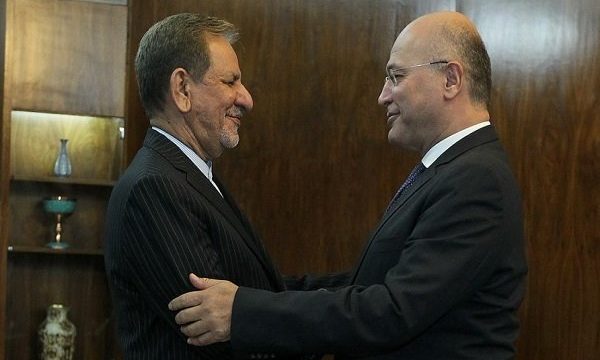 In a phone call with Salih: Iranian 1st VP thanks Iraq for hosting Arbaeen pilgrims

Es’hagh Jahangiri made the phone call to Iraqi President Barham Salih on his visit to Iraqi holy cities of Najaf and Karbala today to attend the Arbaeen procession.

During the phone conversation, Jahangiri expressed his gratitude to Iraq for hosting Arbaeen pilgrims and hailed the deep political, economic, cultural and scientific relations between the two countries.

He once again offered congratulations Salih on his election as the Iraqi president, inviting him to visit Iran.

Barham Salih, for his part, expressed his happiness with Iran’s first vice-president’s visit to Iraq, saying that Iraq sees hosting Arbaeen pilgrims as a duty and honor.

The Iraqi president further said “Iran and Iraq are two neighbors and friends who have historical relations with each other and we hope that during the new term we will witness deepening and expanding of relations in all fields.”

Salih also responded to the invitation extended to him by Jahangiri, expressing hope that the visit will take place and he will meet with Iranian officials, especially president Hassan Rouhani soon.

Jahangiri arrived in Iraqi city of Najaf on a one-day visit to join pilgrims who are mourning the 40th day after the martyrdom of Imam Hossain on Ashura day, which is called Arbaeen among Muslims.