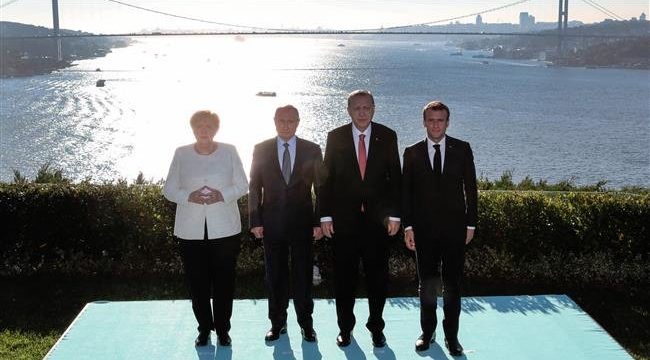 Constitutional committee for Syria should start work, Russia to join in: Putin

Press TV – Russian President Vladimir Putin says a constitutional committee for Syria should start work in order to help put an end to the years-long bloody conflict in the Arab country, adding that Moscow would actively take part in that process.

Putin made the remarks during a press conference on Saturday following a quadrilateral summit on Syria in the Turkish city of Istanbul with Germany’s Angela Merkel, France’s Emmanuel Macron and Turkey’s Recep Tayyip Erdogan.

Earlier this year, Moscow invited representatives of Syria’s government and armed opposition groups to the Russian resort town of Sochi and proposed creating a committee to revise the constitution.

The committee is expected to include 150 members: 50 chosen by Damascus, 50 by the opposition and the final 50 by de Mistura. It will also include civil society representatives, religious and tribal leaders, experts and women.

The Russian president also told the joint press conference that he hoped that Ankara would soon finish creating a demilitarized zone in Syria’s northern province of Idlib, the last major terrorist-held bastion in Syria.

At the end of a summit in Sochi on September 17, Russian President Vladimir Putin and Turkish President Recep Tayyip Erdogan agreed on, among other things, establishing a demilitarized zone in Idlib that would cover an expanse of 15-20 kilometers of land. Militants would have to entirely clear that area by October 15.

Presidents Putin and Erdogan had earlier, in a trilateral summit in Tehran, differed on how to resolve the issue of Idlib.

Putin also said on Saturday that Turkish partners are fulfilling their obligations regarding the agreement on Idlib.

He also said Russia understands the process is not easy and it plans to continue cooperating.

The Russian president added that his country will take active steps if terrorists use the Idlib demilitarized zone as a cover to launch attacks on the rest of Syria.

“Should radicals … launch armed provocations from the Idlib zone, Russia reserves the right to give active assistance to the Syrian government in liquidating this source of terrorist threat,” the Russian President vowed during a summit on Syria in Istanbul.

Erdogan also said after the top-level summit that a constitutional committee for Syria should be formed as soon as possible, expressing hope that it would be formed before the end of the year.

The Turkish president said that the participants of the summit discussed the return of refugees to Syria and agreed that the returns should be voluntary.

The French president, meanwhile, said that the international community would be watching to make sure that ceasefire agreed in Idlib will be long lasting.

“We will all be extremely vigilant to ensure that these commitments are met and that the ceasefire is stable and sustainable,” Macron told reporters after the high-level summit.

Macron also said any military offensive by the Syrian government would have “unacceptable security and humanitarian consequences”.

Merkel also said that a solution to the Syria conflict cannot simply be military and must include a political process under the auspices of the United Nations that envisages free elections as a goal.

“At the end of this political process, there must be free elections to which all Syrians have access – including the diaspora,” she told the news conference.

In a joint statement issued ahead of individual press conferences, the four leaders stressed the importance of a lasting ceasefire, while underlining the need to continue fight against terrorism.

They expressed determination to reject separatist agendas aimed at undermining the sovereignty and territorial integrity of Syria.

The participants also expressed support for an inclusive political process backed by the United Nations and with the participation of all Syrian parties.