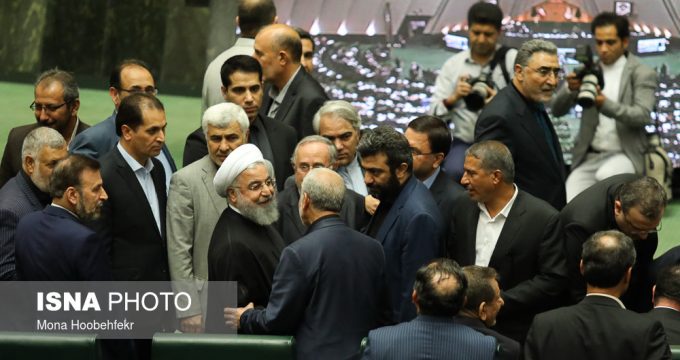 Bloomberg | Golnar Motevalli: Iranian President Hassan Rouhani said the country would fight the U.S.’s efforts to wage an economic war against it as he pursues a major cabinet reshuffle, focusing on economic ministries.

Rouhani, who is under mounting pressure in Iran to contain a currency crisis brought on by U.S. President Donald Trump’s decision to withdraw from the 2015 nuclear deal, wants lawmakers to approve four ministers he has proposed as part of an agenda to overhaul Iran’s banking sector and galvanize the oil-rich Persian Gulf country against the impact of U.S. sanctions.

“Today, our main enemy means America. It’s drawn its sword from the sheath and points it in the faces of the people of Iran and we have to battle and we have to fight and we have to be united,” Rouhani said in a speech to lawmakers ahead of a parliamentary vote of confidence that will decide who runs four ministries — economy and financial affairs; industry, trade and mines; labor; as well as roads and urban development.

Despite the rial crashing to record lows, Iran’s foreign-exchange and cash reserves are “at their highest level than at any other time in the past,” he said, without giving more details. The rial has lost about 70 percent of its value against the dollar on Iran’s secondary market since last year and the government has banned the import of hundreds of non-essential goods to prevent foreign currency outflows.

The next round of U.S. sanctions against Iran come into effect on Nov. 5 and seek to wipe out the Islamic republic’s revenue from oil exports, its main source of income.