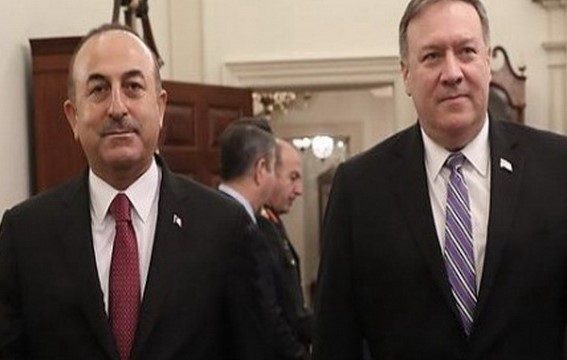 IRNA – US Secretary of State Mike Pompeo and his Turkish counterpart Mevlut Cavusoglu in a meeting in Ankara discussed issues related to Iran and Syria, State Department spokesperson Heather Nauert said in a statement.

“Secretary Michael R. Pompeo met with Turkish Foreign Minister Mevlut Cavusoglu in Ankara on Wednesday. The two diplomats discussed a range of issues of bilateral importance, including Syria, Iran, and counterterrorism. The Secretary welcomed the decision to return Pastor Andrew Brunson and reiterated the United States’ willingness to assist Turkey in its investigation of the Jamal Khashoggi case,” the statement reads.

According to Turkish media ‘Daily Sabah’, “The US Treasury earlier issued sanctions against Turkish officials, including Minister of Justice Abdülhamit Gül and Minister of Interior Süleyman Soylu in retaliation for Turkey’s detainment of terror-linked US pastor Andrew Brunson.

The 59-year-old Saudi investigative journalist, who had left Saudi Arabia since Bin Salman was named Crown Prince and moved to the US, vanished on October 2 after entering the Saudi Consulate in Istanbul to collect documents for his forthcoming marriage.

In his articles published mostly by the Washington Post, he sharply rebuked Saudi Arabia’s policies, including Saudi Arabia’s war in Yemen, financial crisis between Saudi Arabia and Canada and arresting women’s rights activists.

Some unofficial news sources say Saudi security agents have tortured and brutally murdered the prominent journalist inside the Saudi Consulate in Istanbul, cutting his body up into pieces.