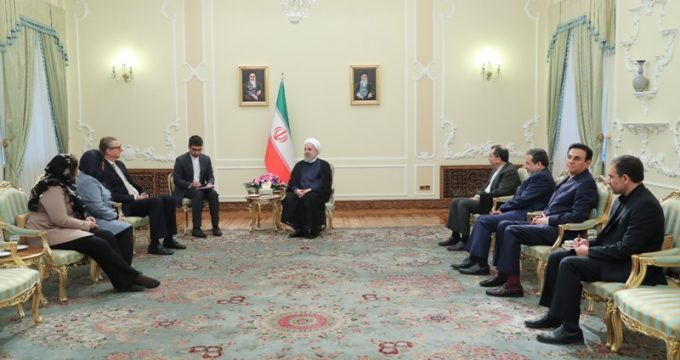 President in a meeting with new Amb. of the Netherlands to Tehran: I hope ICJ’s interim ruling prevents US’ illegal acts

president.ir – President described Iran-Netherlands relations long-standing and close, saying, “We are willing to deepen relations with the Netherlands in all fields, especially economy and banking”.

Speaking on Tuesday in a meeting with the new Ambassador of the Netherlands to Tehran, President Hassan Rouhani said, “I am confident that with bilateral cooperation, we can further deepen relations between the two countries in all fields, especially economy and banking”.

He also welcomed the political stances of the Netherlands and the European Union towards the Joint Comprehensive Plan of Action (JCPOA), saying, “We all should work hard to safeguard this important, international agreement”.

“I hope that the interim ruling of the International Court of Justice prevents the United States’ illegal acts, including anti-human sanctions,” he continued.

Dr Rouhani also stressed the importance of all-out fight against terrorism, saying, “Today, terrorism has turned into a problem, not only for the region, but also for the entire world; therefore, it is imperative that all countries understand its risks have serious will for combatting this scourge”.

Referring to the recent terrorist attack in Ahwaz city in southern Iran, the President said, “Unfortunately those who claimed responsibility for this attack live in Europe, and we hope that European countries carry out the necessary measures in this regard”.

“Along with the EU’s strengthening of financial institutions, we are determined to further develop our banking relations with Iran to not let sanctions have any effect on economic relations between the two countries,” he continued.

He also said, “I assure you that the Netherlands is seeking to further consolidate economic relations with Iran, and in this regard we have asked our trade and commerce community to have an active presence in Iran”.

“We will also be active in prosecuting the perpetrators of the Ahwaz terrorist attack, who are in Europe,” he continued.