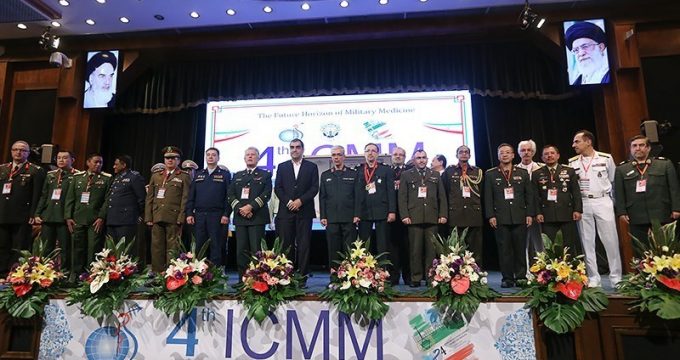 October 14, The Iran Project – The 4th edition of Military Medicine Congress in Asia-Pacific Region started on Saturday (Oct. 13) in IRIB International Conference Center, in Tehran, and will continue through Monday (Oct. 15).

The three-day event is attended by military commanders and delegations from 45 countries.

Addressing the audience on Saturday morning, Chief of Staff of the Iranian Armed Forces Major General Baqeri stated that Iran practically realized the significance of military medicine by saving the lives of 554,000 soldiers and victims of chemical attacks in 50 military hospitals during the Iraqi imposed war in the 1980s.

The general reiterated “the military and its medical capabilities are responsible for protecting people in times of difficulty and against natural disasters; therefore, the military healthcare system shall have the ability to manage critical situations.”

General Baqeri also condemned the Zionist regime’s crimes against Palestinian people and the Saudis acts of aggression in Yemen, saying “today, we can see these regimes’ crimes in the region, which even attack the hospitals and healthcare centers. Moreover, the expansion of terrorist groups in the region has led to the death of many innocent civilians [in the past years.]

Delivering speech at the congress,  Iran’s Minister of Health said during the eight years of the Iraqi imposed war, Iran acquired extensive experience in the field of emergency medicine and surgical techniques for the injured in the war and the Islamic Republic of Iran is proudly prepared to share its experiences with military medical teams of other countries.

The congress, themed “The Future Horizon of Military Medicine”, emphasizes the common goals of promoting medico-military scientific activities, and strengthening the bonds between medical services of member states, not only in the Asia Pacific region, but also between all of the ICMM member states around the world. The main scientific topics of the Congress include CBRNE, psychology and cognitive science in military community, disaster management and military traumatology, and military medicine education and international collaborations.

Iran took the rotating presidency of the biennial congress.