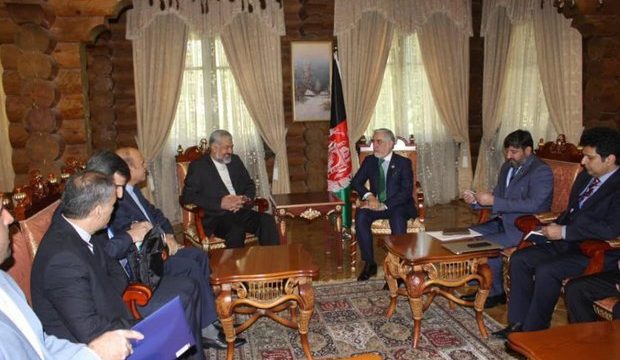 MNA – Vice Minister of Foreign Affairs Morteza Sarmadi, while stressing Iran’s resistance against US’ new sanctions, noted the gradual formation of a global will aimed at neutralizing the effect of sanctions on Tehran.

Sarmadi made the remarks on Friday in a meeting with Afghanistan’s Chief Executive Abdullah Abdullah on the sidelines of the 17th Shanghai Cooperation Organization (SCO) Summit hosted by Tajikistan.

During the meeting, the two sides reviewed the latest status of bilateral relations and called for an expansion of cooperation between Tehran and Kabul.

Sarmadi maintained that bilateral issues are being followed up within the framework of the five committees set up by the two sides in the areas of security, economy, culture, refugees, and water.

He then discussed the current security situation in the Middle East, the defeat of terrorist groups in Iraq and Syria, and the transfer of these terror groups to Afghanistan.

“We consider the security of Afghanistan as our own, and will spare no effort to combat [terrorism],” Sarmadi stressed.

He then underscored Iran’s resistance against the new sanctions imposed by Trump’s administration, and rejected unilateralism on the global scene. He added that a global will is gradually being formed to neutralize the impact of sanctions on Iran.

Afghanistan’s Chief Executive Abdullah Abdullah, for his part, voiced his country’s readiness to expedite the finalization of a comprehensive document of cooperation between Tehran and Kabul.

He added that fundamental issues such as security, water and economic cooperation as included in the comprehensive document are the top priorities of the Afghan government. He stressed that his country would make every effort to finalize these agreements and increase bilateral relations.