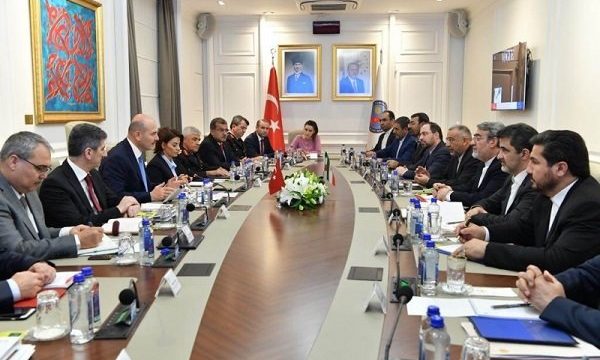 MNA – The high-ranking delegations of Iran and Turkey held a meeting in Ankara on Thursday, chaired by Iranian Interior Minister Abdolreza Rahmani Fazli and his Turkish counterpart Süleyman Soylu.

The meeting between the two countries’ delegations focused on border, regional and international issues, such as combating human trafficking and illict drugs, as well as fighting terrorism.

The Iranian delegation, headed by Rahmani Fazli, comprised his deputies Samani and Dinparast, Head of the Interior Ministry’s Information Center and International Affairs, Shoajaei Kiasari, as well as the security and law enforcement director general at the Interior Ministry, deputy commander of border police, and a representative from the National Security and Foreign Policy Committee of Iranian Parliament.