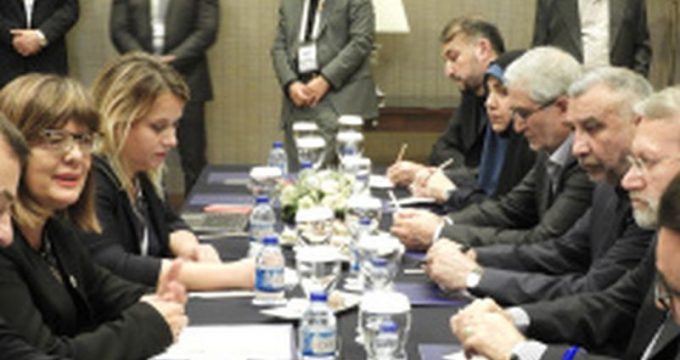 IRNA- The president of the National Assembly of Serbia, in a meeting on Wednesday with her Iranian counterpart Ali larijani, emphasized deepening of relations and enhancing cooperation between Iran and the east European nation.

In the meeting took place on the sidelines of the parliament speakers of the Eurasian countries in Turkey, Maja Gojković described as satisfactory ties between Serbia and Iran, and expressed confidence in further deepening of relations between the two countries.

As announced by the National Assembly of Serbia, Gojković pointed out the willingness of the two sides to boost comprehensive cooperation, and emphasized Belgrade is committed to deepening friendly ties and economic cooperation with Tehran.

Gojković and Larijani expressed satisfaction with inter-parliamentary cooperation between the two nations during recent years.

The president of the National Assembly of Serbia also appreciated Iran for respecting international law and supporting the territorial integrity and sovereignty of Serbia.

Over the past two years, Iran and Serbia have taken measures to enhance relations and promote cooperation in various fields, especially political, economic and cultural areas.

Visa-free travel to Serbia and Tehran-Belgrade direct flights are two major steps which have been widely welcomed by both countries.

Also, at the 15th Session of the Joint Iranian-Serbian Committee, which was held on June 21, 2018, three memoranda of understanding were signed between the two countries.