A Look at Iranian Newspaper Front Pages on October 9

Iran Front Page – IFP has taken a look at the front pages of Iranian newspapers on Tuesday, October 9, 2018, and picked headlines from 12 of them. IFP has simply translated the headlines and does not vouch for their accuracy.

Iranian papers today continued to cover reactions to the Iranian Parliament’s ratification of a bill on the country’s accession to the Combating the Financing of Terrorism (CFT).

Also a top story was the alleged murder of Saudi journalist Jamal Khashoggi in the Saudi consulate in Istanbul, which has sparked a great controversy over the past few days.

1- Ahmadinejad, Jalili First Passed Bills on FATF; Why Are They Silent Now? 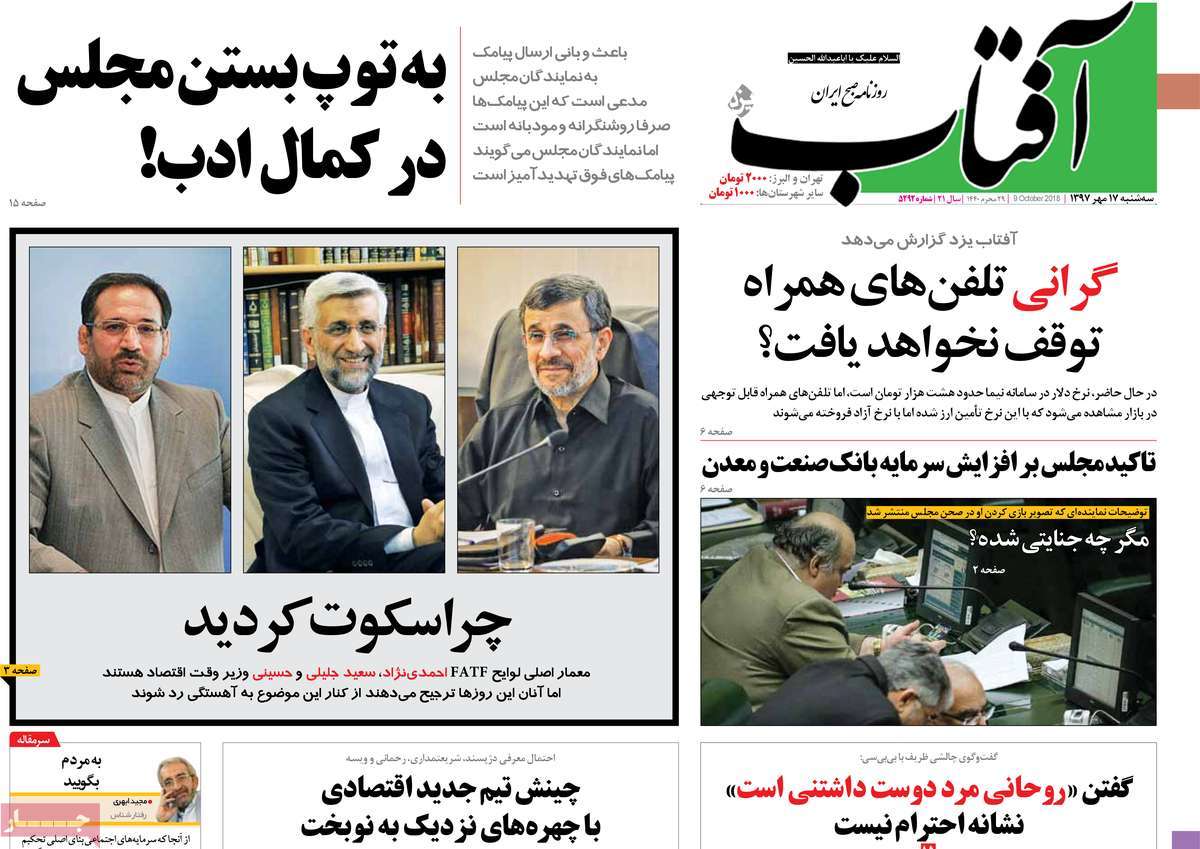 1- Train of Cabinet Reshuffle Arrives in New Station: 4 New Picks to Be Introduced 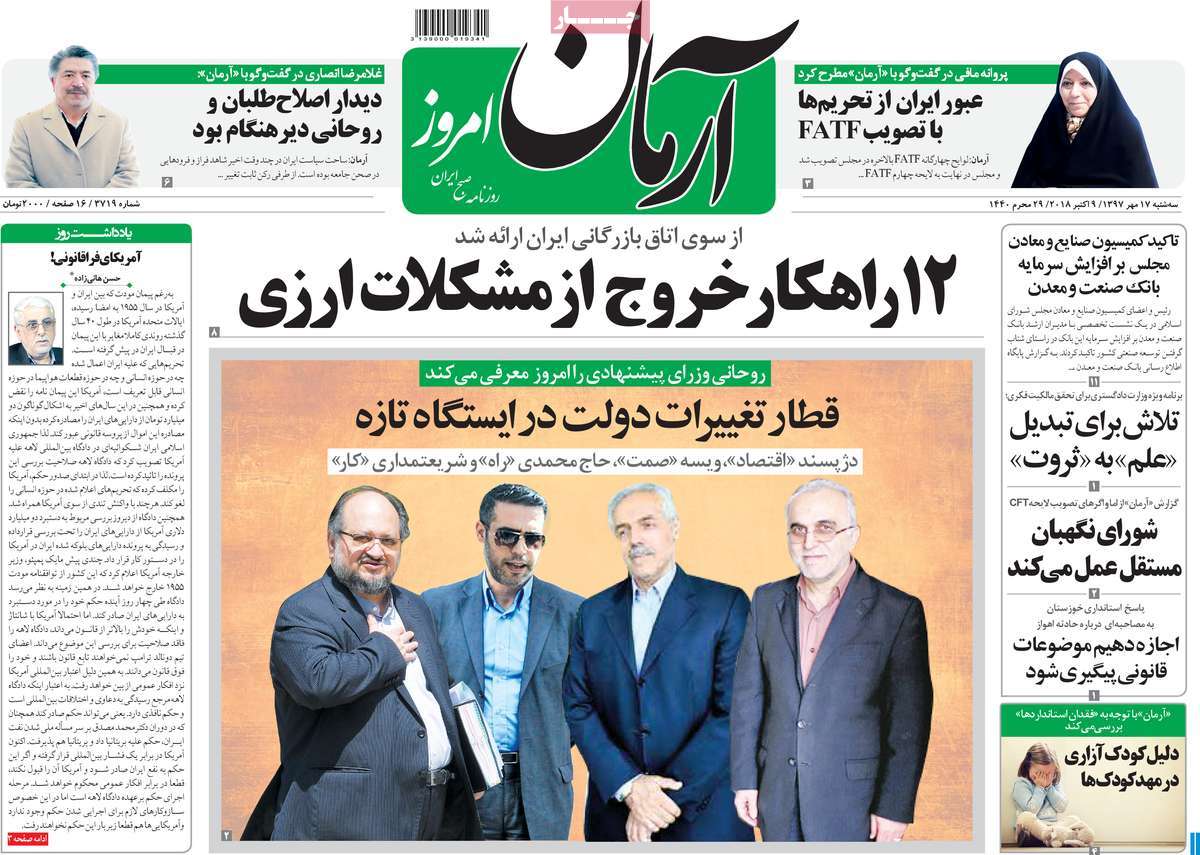 2- Voices of Invisible Kids Not Heard: On National Children’s Week 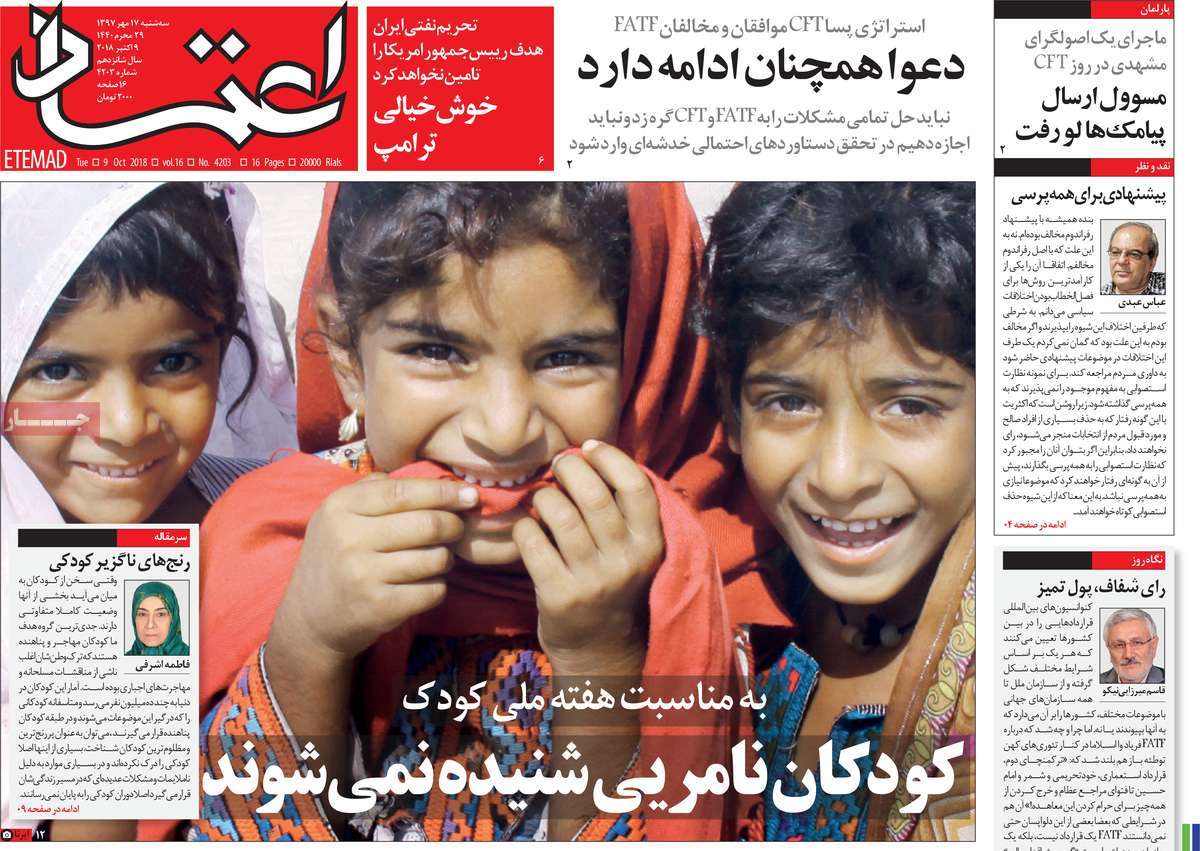 3- There’ll Be No Shortage of Medicine: Iran First VP

4- 19 Governor-Generals, Governors to Be Sacked for Being Retired 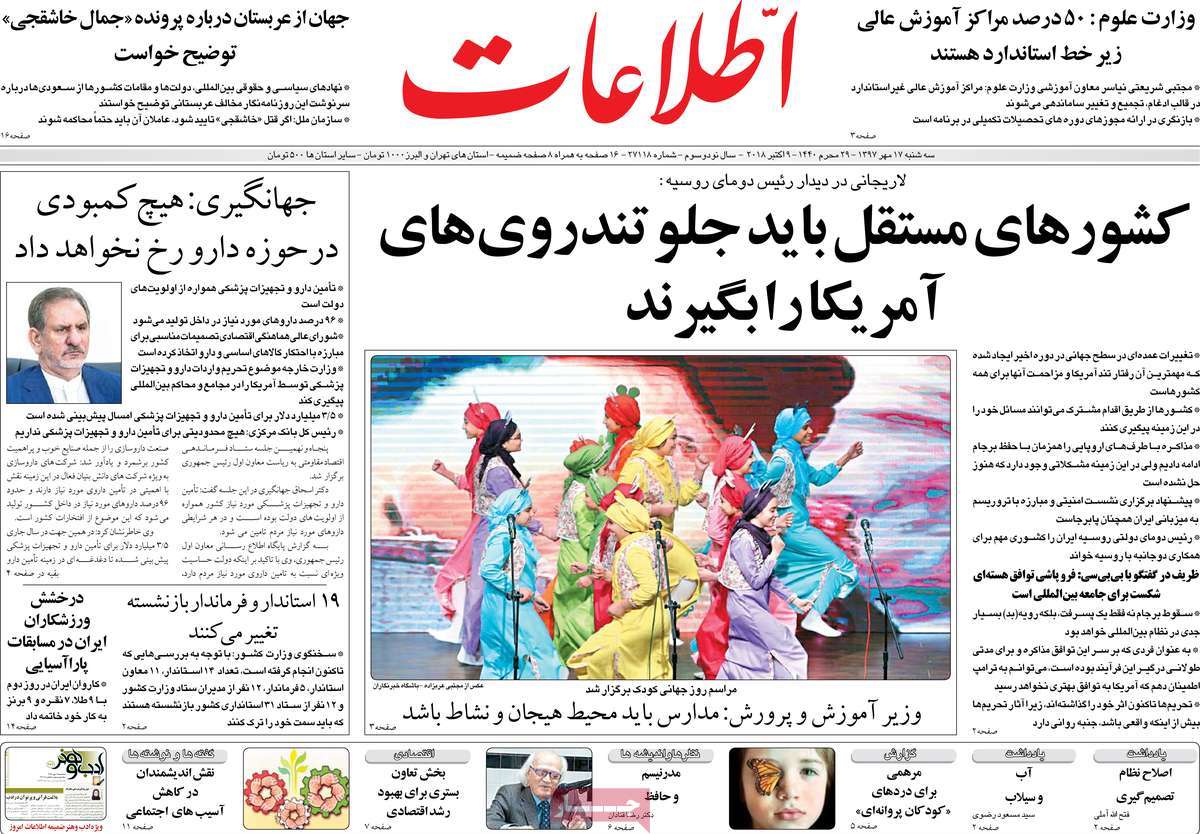 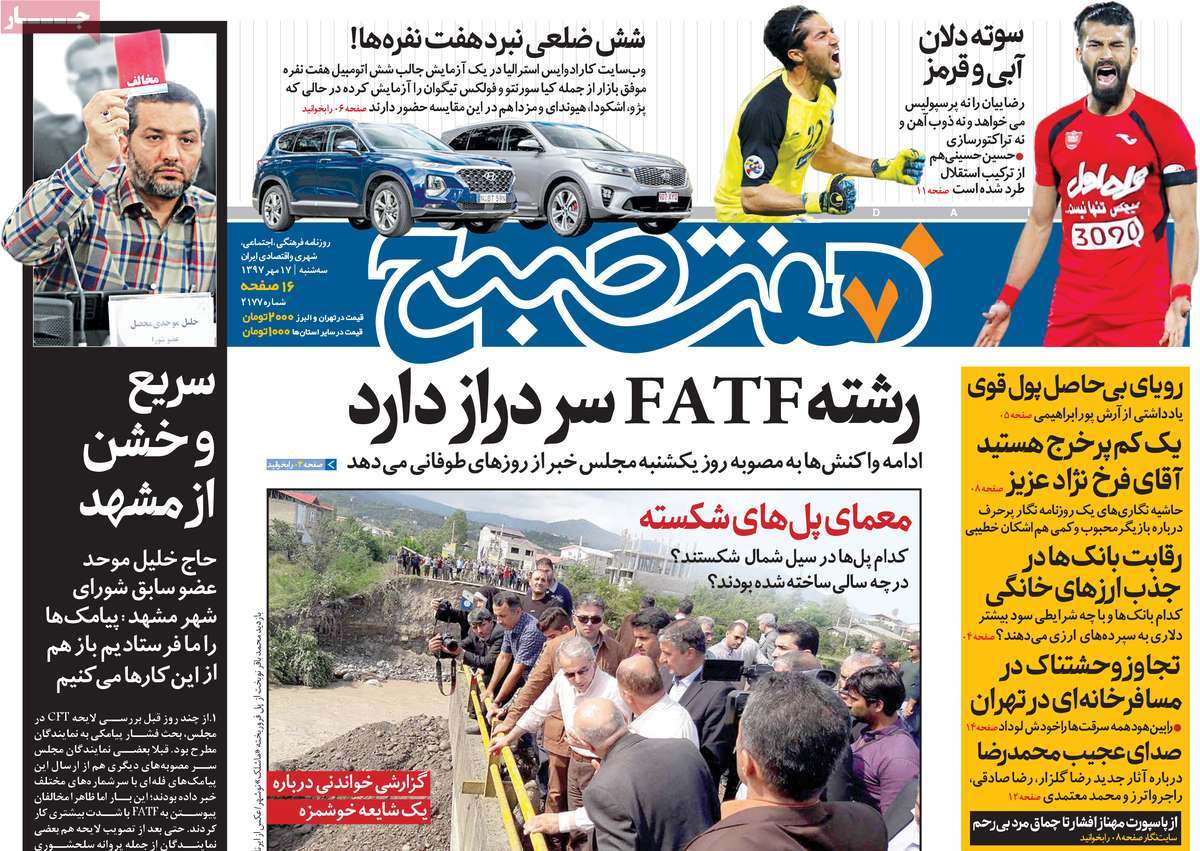 3- We Haven’t Closed Doors for Negotiation with US: Zarif to BBC 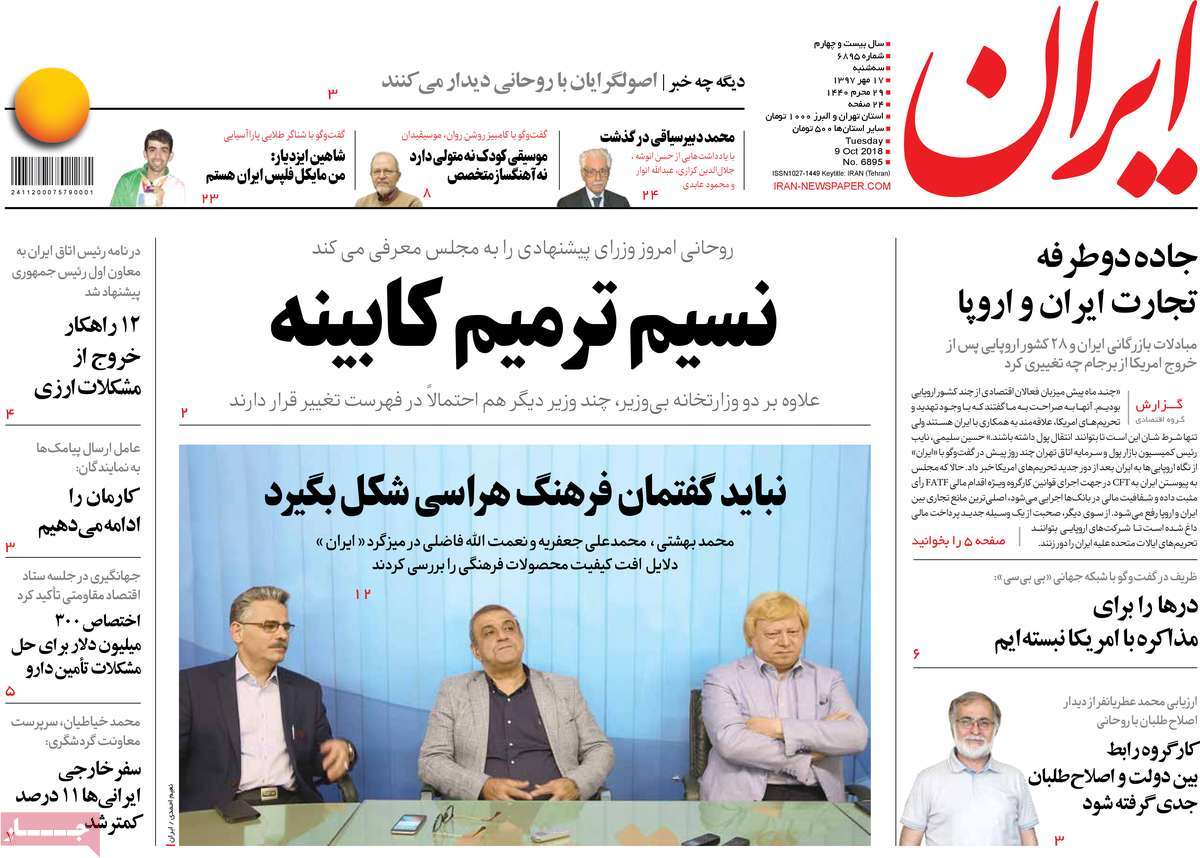 1- India to Buy Iran’s Oil in November, When US Sanctions Will Be Re-imposed

2- Humiliation of US in a Meeting Full of Tension 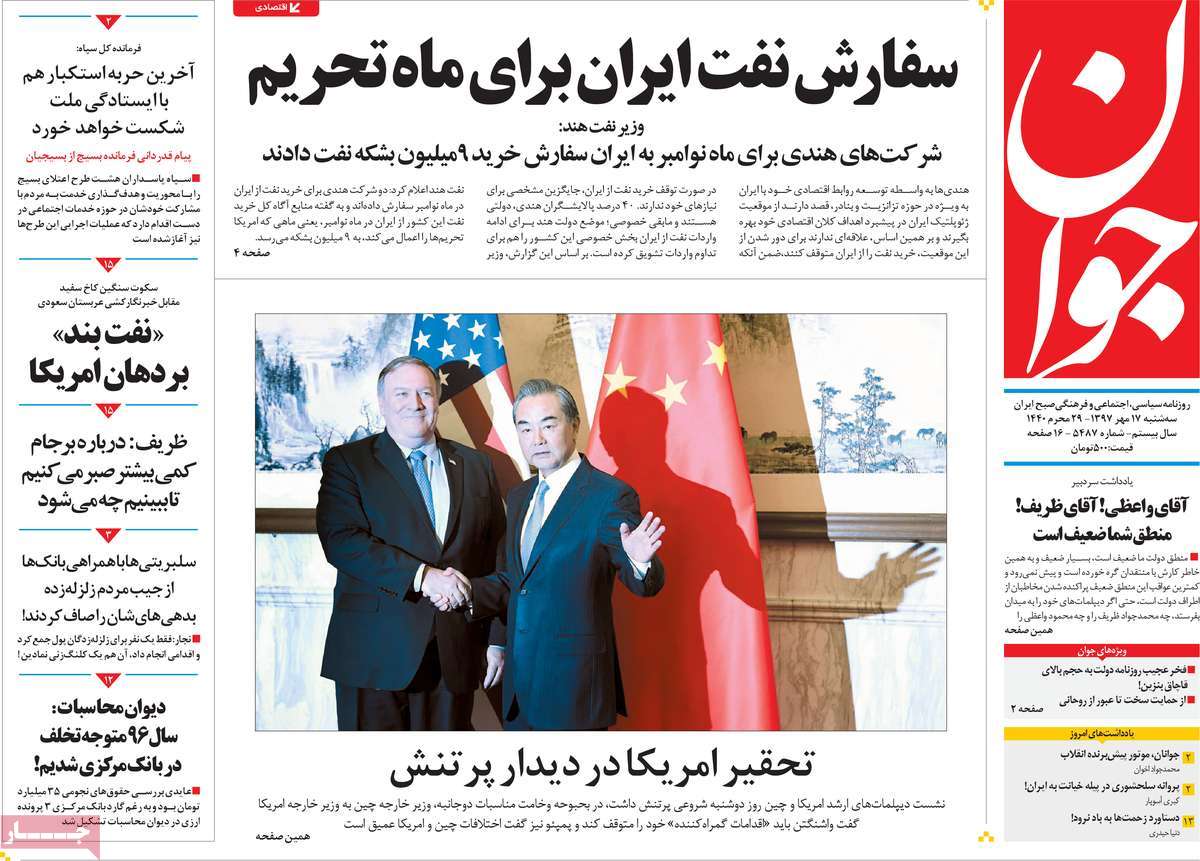 3- No Producer, Even Saudi Arabia, Can Replace Iran in Oil Market 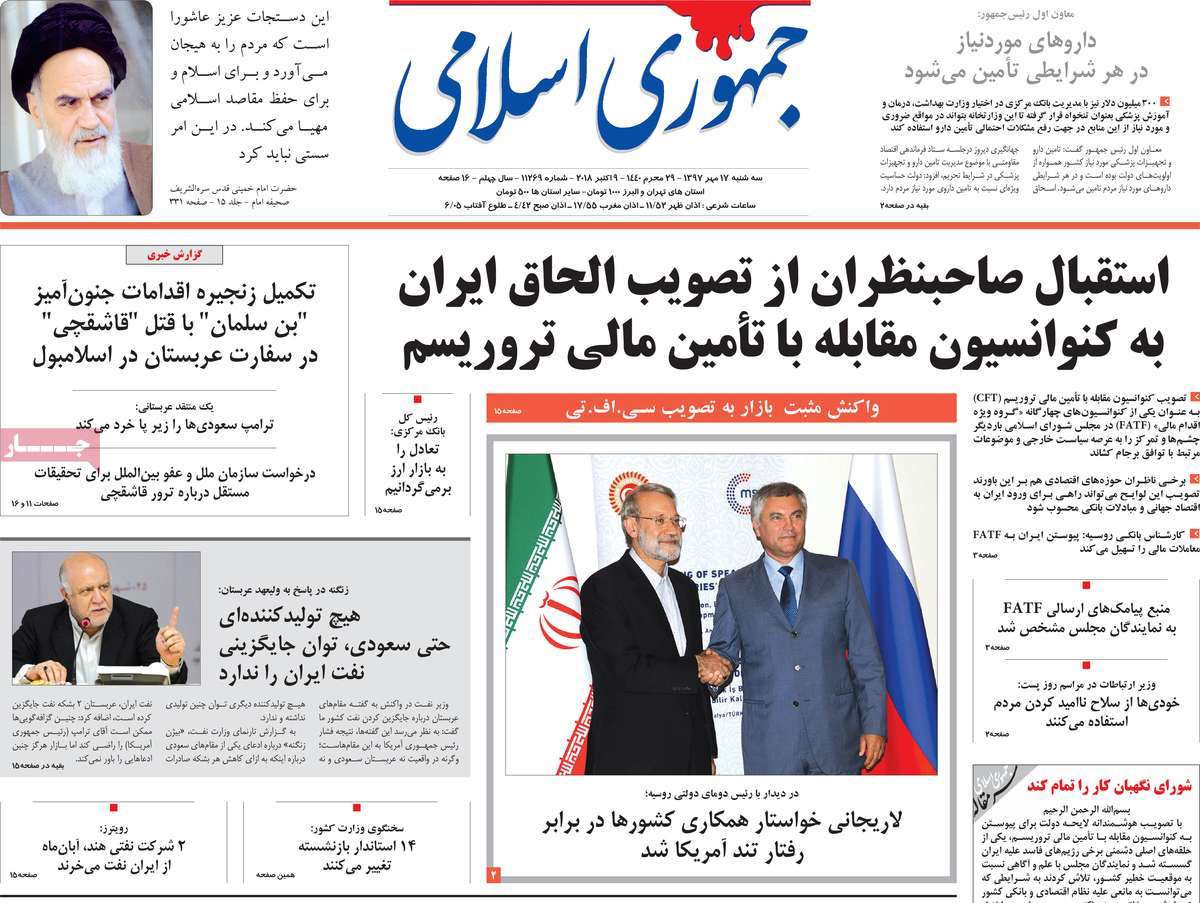 1- What’s Your Next Pretext after JCPOA and FATF?

* They Kept Saying All Problems Will Be Resolved with JCPOA 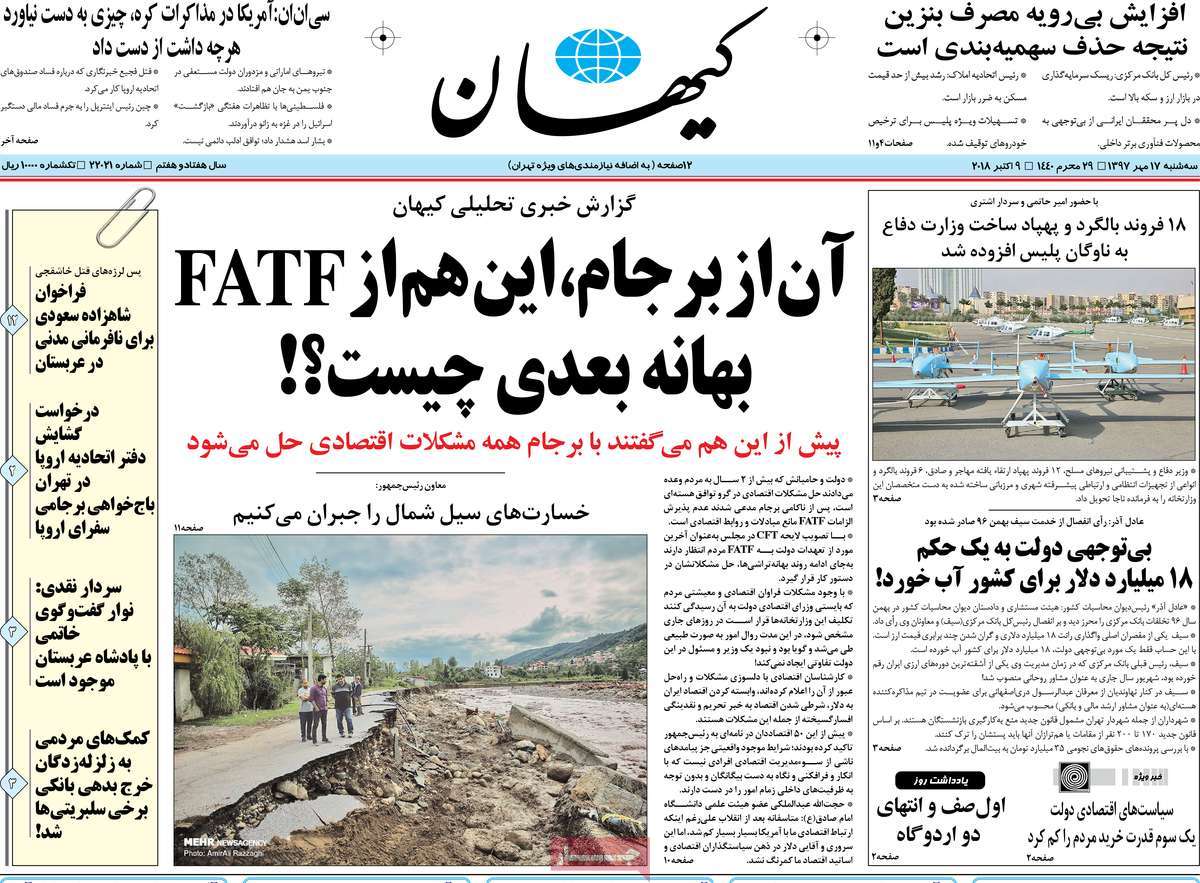 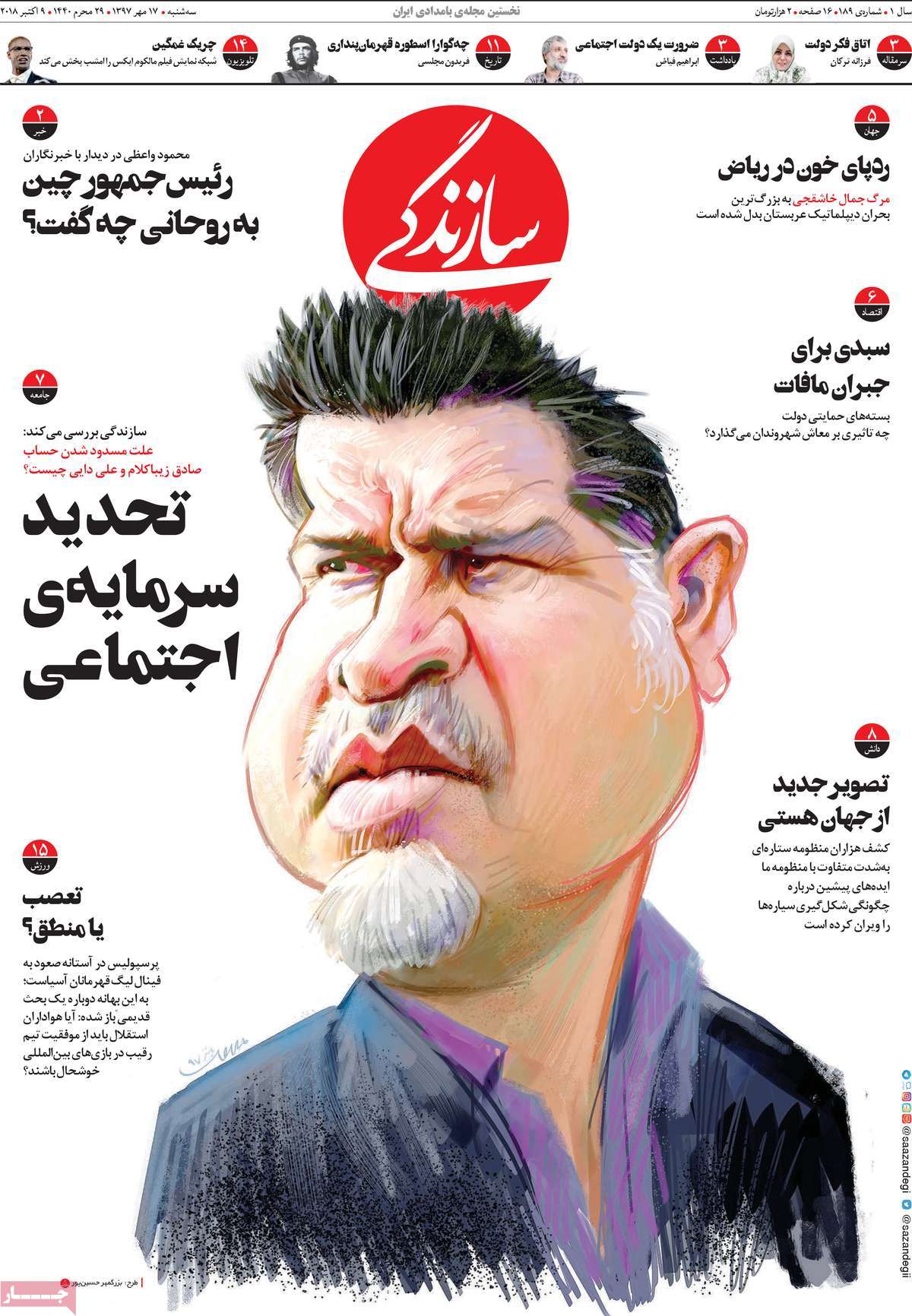 1- Threatening Messages to MPs on FATF Coming from Mashhad

2- Zarif on Rouhani’s Possible Meeting with Trump: Nothing Impossible

3- What Will Guardian Council, Expediency Council Do with FATF? 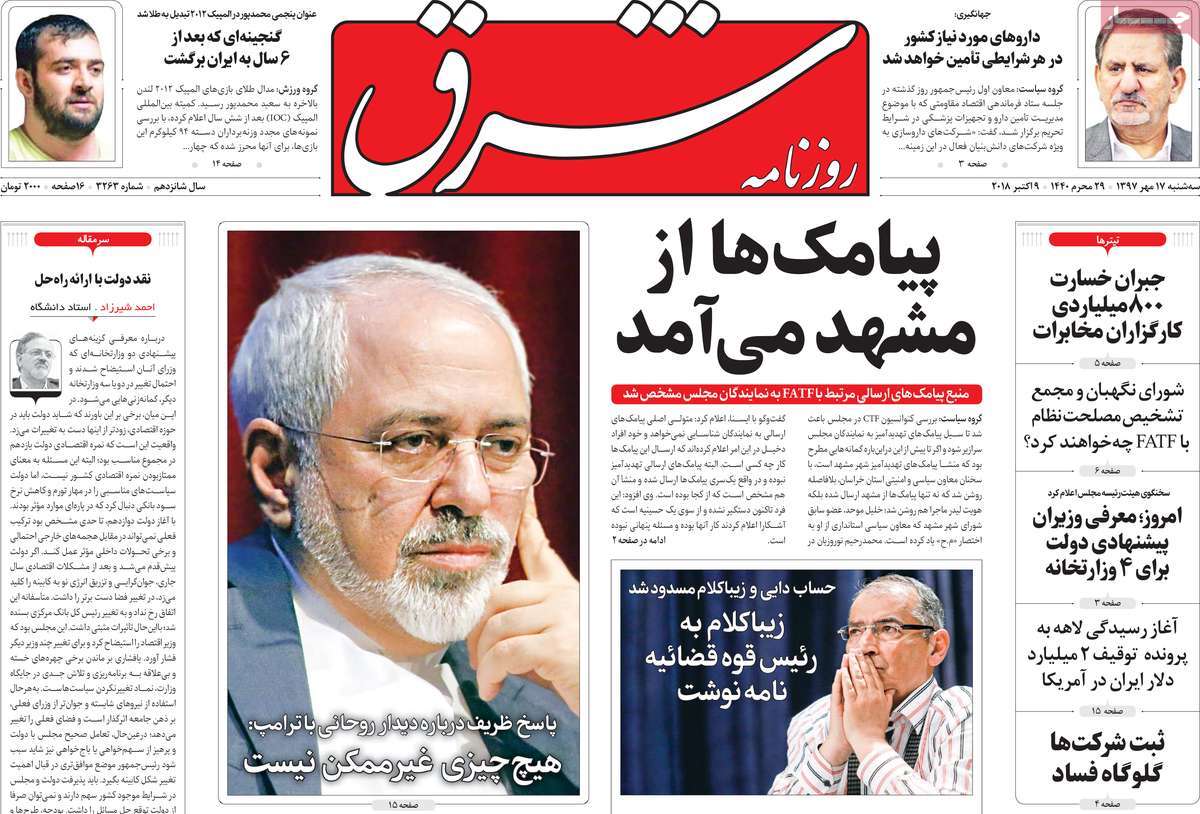 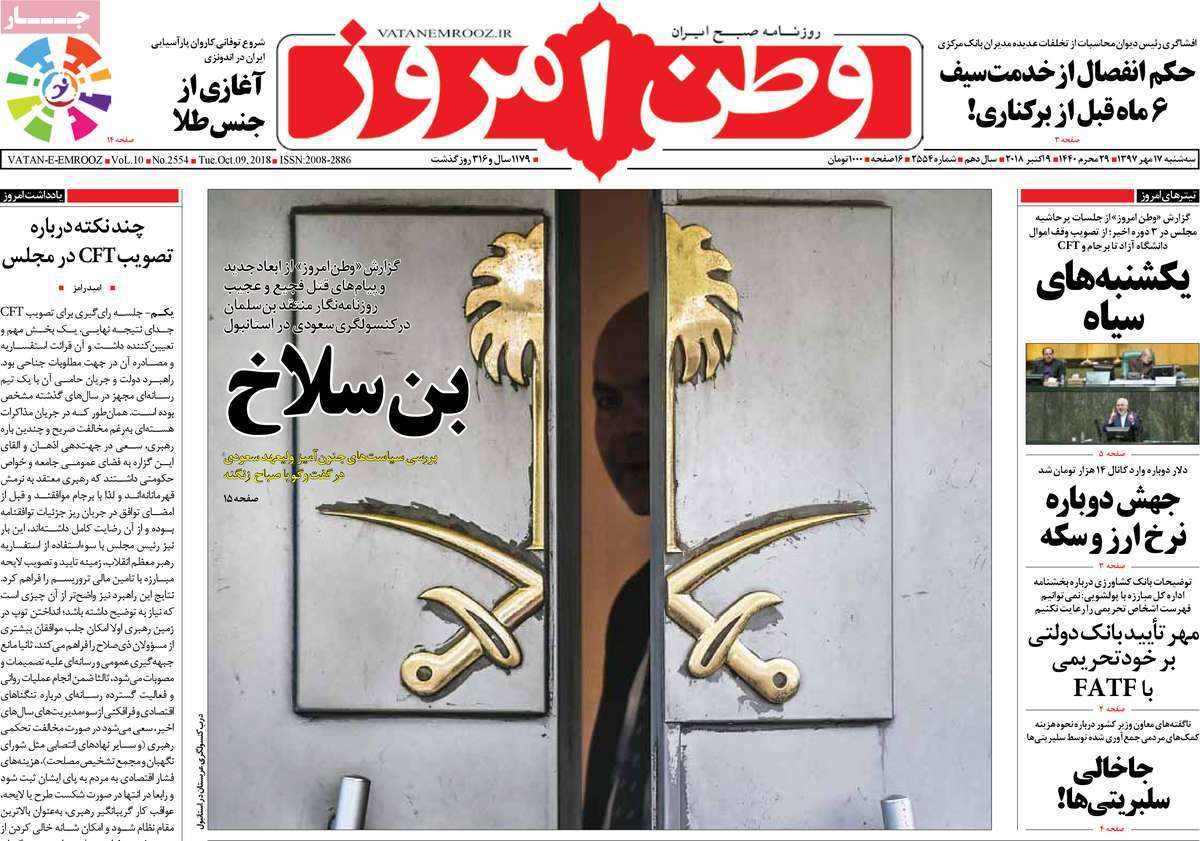