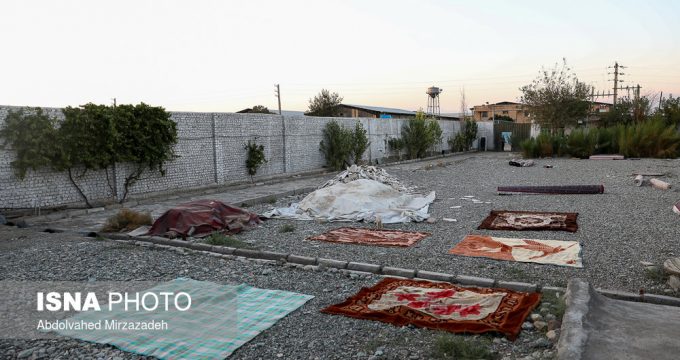 From Turquzabad to Dimona (and a little fun on the way!)

He has been exposed to the Iranian people’s unrelenting mockery of his foolishness before. So when he took his stage props up to the podium at the United Nations General Assembly on September 27, 2018, showing the picture and map coordinates of what he said is a “secret atomic warehouse” in a suburb of Tehran called “Turquzabad,” Mr. Netanyahu must have known that there would be verbally barbed consequences.

In the speech, Mr. Netanyahu claimed he was “disclosing” the site “for the first time,” and said Iran was keeping “massive amounts of equipment and material” there for future use in its “nuclear weapons program.” He said the site was just 100 meters from “the Kalishoi” — which by the way sounded like a Japanese martial art the way he said it — as if that style of direction-giving would be more accurate than longitudes and latitudes.

At one instant, he pointed to the picture of the building and said, “How about inspections right here, right now?” At another, with a triumphal look about him, he said,“[L]adies and gentlemen, rest assured […] what Iran hides, Israel will find.”

The Iranian people wouldn’t let that circus come and go without adequately making fun of Mr. Netanyahu. And they were sure up to the task. Naturally, tongue-in-cheek stuff flooded the social media.

Let me just quickly offer here my picks of the top two jokes and move on (and please excuse the colorful language — Mr. Netanyahu brought it upon himself):

“Yesterday, we had lentil stew for lunch and red kidney bean side dishes for dinner [both of them highly intestinal gas-inducing food]. Today, we warmed the leftovers [from both] and had them for lunch. I’m thinking Netanyahu will find our house and ask for ‘inspections right here, right now!’”

And second place goes to:

“Dude! That’s where we throw [off-the-radar] parties. Good luck screwing that with those map coordinates!”

The word “Turquzabad” itself, while referring to a real place, has somewhat humorous, local connotations for Iranians. In Persian, it is something like “John Doe,” except that is used to refer to places, not people.

Abbas Araqchi, Iran’s deputy foreign minister and a former nuclear negotiator, repeatedly attempted not to chuckle when he spoke about it following Mr. Netanyahu’s remarks.

“Seriously, seriously, I think someone is sending Netanyahu on a wild-goose chase. This time, they have referred him to Turquzabad!” Mr. Araqchi said, with Foreign Minister Javad Zarif — also laughing and visibly speechless with amusement — next to him.

Mr. Netanyahu can speak about Iran all he wants. But wouldn’t he be better off running things by somebody before he speaks them? Seriously.

It was not the first time Mr. Netanyahu was staging a show. His past performances include (1) an appearance, also at the United Nations General Assembly in 2012, during which he famously held up a cartoon bomb that looked pretty much like the ones in Wile E. Coyote and the Road Runner and that the White House later trolled; (2) a speech at the US Congress in March 2015, which served well to deepen a schism between him and then-President Barack Obama; and (3) a closed-door meeting with 22 US lawmakers in August 2015, after which one stunned lawmaker said of Mr. Netanyahu, “What a showman!”

And then there was his appearance on early-morning live TV beaming into President Donald Trump’s bedroom in April 2018, revealing what Mr. Netanyahu claimed was nuclear-related material from an Iranian “atomic archive.”

But Mr. Netanyahu’s showing at the General Assembly on September 27 this year was certainly the first time he was drawing the most embarrassing rebuttal of his oft-repeated anti-Iran allegations.

“I have a message to the head of the IAEA, Mr. Yukiya Amano. I believe he’s a good man. […] Well, Mr. Amano […] Go inspect this atomic warehouse, immediately, before the Iranians finish clearing it out,” the Israeli prime minister said, at least implying that he thinks the head of the International Atomic Energy Agency “goes inspecting” sites himself.

Anyway, Mr. Amano must have been watching the speech over pizza because it didn’t take him long to show up to, essentially, demolish Mr. Netanyahu.

In an October 2 statement that read like an adult’s solemn reminder to a child yet to fully develop his cognitive capabilities, the IAEA chief said, “It should be noted that under the existing verification framework the Agency sends inspectors to sites and locations only when needed. […] The Agency […] has conducted complementary accesses under the Additional Protocol to all the sites and locations in Iran which it needed to visit.”

When Iran and originally six world powers plus the European Union (EU) struck a nuclear deal in 2015 — the very deal that all of Mr. Netanyahu’s theatrical gimmicks have been aimed at derailing — they agreed to put the organization under Mr. Amano’s watch in official charge of monitoring the implementation of the technical aspects of the deal.

The IAEA’s October 2 statement was a clear sign that, for all of their drama, Mr. Netanyahu’s attempts are falling flat.

But, in the futile Israeli attempt to dramatize the Iranian nuclear program, there is not just absurdity. There is also irony:

Iran is a member of the nuclear Non-Proliferation Treaty (NPT). Israel is not.

Iran has no military nuclear program. Israel does.

Iran has, under the nuclear deal, allowed enhanced monitoring by the IAEA of all of its nuclear activities. Israel has allowed no inspections at all of its covert nuclear program.

Still, there is more Israeli behavior that flies in the face of the international world.

For one thing, Mr. Netanyahu on August 29, 2018 issued a threat of a nuclear attack against Iran from inside an Israeli nuclear facility in the Negev Desert — formerly known as Dimona.

Israel is believed to have at least 200 nuclear warheads in a military nuclear program active since decades ago. According to The Washington Post, the United States initially opposed and worked to stop that program.

‘Quite simply, they were lying’

“So the Israelis turned to France, which […] in 1957 secretly agreed to help install a plutonium-based facility in the small Israeli city of Dimona. Why France did this is not settled history. French foreign policy at the time was assiduously independent from, and standoffish toward, the United States and United Kingdom,” according to the 2013 article on The Washington Post.

While working together, Israel and France kept everything secret from the US.

“When U.S. intelligence did finally discover Israel’s nuclear facility, in 1960, Israeli leaders insisted that it was for peaceful purposes and that they were not interested in acquiring a nuclear weapon. Quite simply, they were lying, and for years resisted and stalled U.S.-backed nuclear inspectors sent to the facility,” the article reads.

Ultimately, however, Washington made some sort of an unspoken deal with Tel Aviv, agreeing to an Israeli nuclear program over the pretext that Israel lacked conventional means for protection at the time.

That happened during a September 1969 White House meeting between US President Richard Nixon and Israeli Prime Minister Golda Meir.

According to The Washington Post, which cited the Nixon administration’s “meticulous records,” the bargain was that Israel would “make no visible introduction of nuclear weapons or undertake a nuclear test program” in return for the US keeping mum.

But since, the Israeli regime’s conventional military power has increased. And “[s]ome scholars are beginning to ask whether the old deal is outdated,” according to the Post.

Speculation came up (unnecessarily) when US National Security Adviser John Bolton met with Israeli nuclear officials in August. Mr. Bolton, who likes to present himself as a wild pro-Israeli hawk, dismissed all such speculation.

“‘I don’t think there is anything out of the ordinary or unexpected,’ Bolton said of the meeting. Asked to elaborate, he added only: ‘No change in policy,’” Reuters reported later in August.

When Mr. Netanyahu less-than-tacitly brandished nuclear weapons against Iran at the Israeli facility in Negev in late August, he basically violated even that purported agreement with the US.

Bahram Qassemi, spokesperson for the Iranian nuclear facility, said on Monday that international inspections of the Israeli nuclear program had to be put on the global agenda and that the current inaction on the matter was not sustainable.

There is no questioning of the fact that that should happen.

But at one point or another, Israel’s shameless even if laughable attempts to derail the Iranian nuclear accord with the remaining five parties will have to be addressed, too.

All the derision that the Turquzabad remarks sparked, and the fact that Israeli accusations against Iran are being taken increasingly less seriously, in no way remove the need to confront Israeli cheekiness against the greater part of the world that is both law-abiding and civilized.

(Hossein Jelveh is an independent Iranian journalist based in Tehran. He has graduated with a master’s degree from the Faculty of World Studies at the University of Tehran. You can follow him on Twitter @hossein_jelveh)