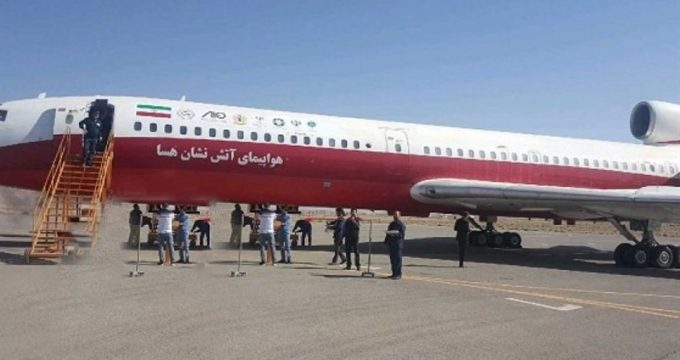 In a ceremony on Saturday, a plane-manufacturing subsidiary of the Defense Ministry unveiled the jet airliner that has been adapted to carry out aerial firefighting.

The homegrown water bomber is employed for extinguishing wildfires and large-scale blazes.

During the ceremony, attended by Defense Minister Brigadier General Amir Hatami, Vice-President for Science and Technology Affairs Sorena Sattari, and Head of the Department of the Environment Issa Kalantari, a high-pressure water discharge operation was carried out.

The aircraft can drop 18 tons of water over the target zone during only 5 seconds with a customized pattern.

Describing the features of the water bomber, General Hatami said only a few countries have the technical know-how to produce the aerial firefighting systems.

The defense minister said the system includes high pressure water storage tanks with thin walls which have been designed to avert fluid turbulence during flight.

He said an advanced method for the discharge of water would allow for aerial firefighting over larger areas, adding that the indigenous system could be installed on various types of heavy airplanes.

Equipped with the system with a capacity of 40 tons of water, the Ilyushin Il-76 plane was used to control a wildfire in June 2015 that laid waste to around 40 hectares of forests in the western province of Ilam.