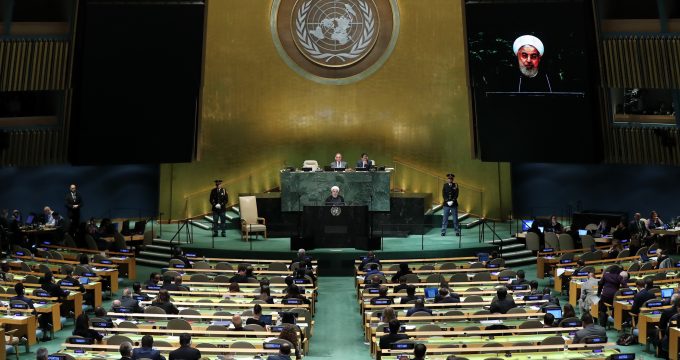 Al-Monitor – After ups and downs and weeks of debate between critics and supporters of the Iranian president over whether he should attend this year’s UN General Assembly meeting, Hassan Rouhani delivered his speech in New York on Sept. 25. Both sides now seem to be applauding his performance.

At the newsstands, the general coverage by Iranian papers was a standing ovation for the president, with each side picking the right angle for their target audience.

Putting pictures of US President Trump and Rouhani side by side, the Reformist daily Shargh focused on the reciprocal nature of talks based on justice and equality as raised by the Iranian president. Some other moderate papers such as Arman highlighted Rouhani’s proposal that he is ready to immediately start talks, and Donya-e-Eghtesad featured Rouhani inviting Washington back to “the negotiating table that it turned upside down.”

Etemad, another pro-reform paper, lauded Rouhani for defending Iran based on a discourse of dignity and wisdom and “speaking in moderation as a peace-seeking politician, despite pressure at home from hard-liners” to make him do the opposite.