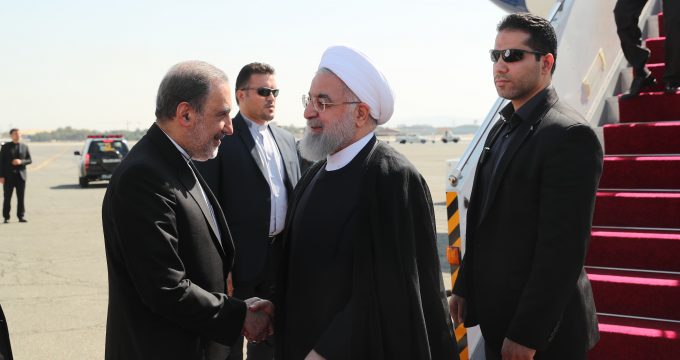 president.ir – President of the Islamic Republic of Iran arrived in Tehran minutes ago after attending the 73rd session of the United Nations General Assembly.

Upon arrival at the airport, President Rouhani was welcomed by First Vice-president Dr Jahangiri, Advisor to the Supreme Leader in International Affairs Dr Velayati and a number of vice-presidents and ministers.

Dr Hassan Rouhani began his intensive visit to New York on Monday morning at 8 am with a meeting with a number of American media executives.

An interview with the NBC, a meeting with the IMF Managing Director, the Cuban President, and addressing the Nelson Mandela Peace Summit were among President’s Monday plans. In the evening of the same day, Dr Rouhani met with the President of Bolivia, President of International Olympic Committee, Chief Executive of Afghanistan and the Turkish President, as well as participating in a meeting of a group of US foreign policy elites.

On Tuesday, the President’s intensive work program began by an interview with CNN and PBS television networks, and then, attended the United Nations General Assembly to express Iran’s positions and views on regional and international issues.

Meeting with prime ministers of Britain, Armenia, Belgium and Norway and the French President, and attending a meeting with a number of American Muslim leaders, ended Dr Rouhani’s Tuesday program.

Dr Rouhani left New York on Wednesday evening after meeting with the United Nations Secretary-General and attending a press conference.