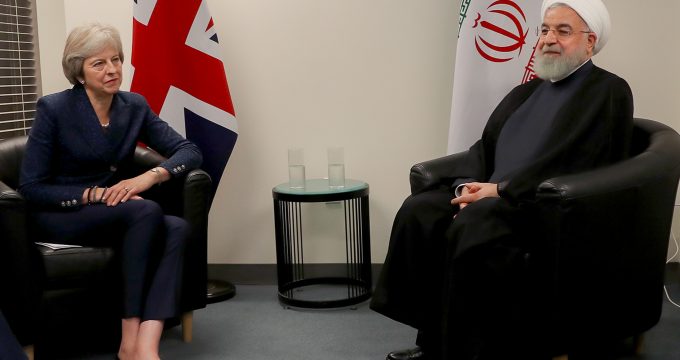 IRNA – Today joint efforts made by Iran and Europe for the implementation of JCPOA is the most important issue, Iranian President Hassan Rouhani said.

Fortunately, the parties are determined to preserve and maintain this international agreement and has adopted firm political policies in this regard, Rouhani said Tuesday night in a meeting with the UK Prime Minister Theresa May on the sidelines of the UN General Assembly Session in New York.

Referring to US illegal withdrawal from Iran nuclear deal, he called for developing cooperation and consultations in suitable practical framework for preserving and implementing JCPOA especially in economic sector.

Based on the IAEA reports, Iran has been complying with its commitments under the JCPOA; Rouhani said adding that commitments should be balanced in multilateral agreements.

Elsewhere in his remarks, Iranian president appreciated UK government and people for their sympathy with victims of Ahvaz terror attack, saying all countries should take equal and firm positions against terrorism.

Emphasizing Iran military power to confront terrorism, Rouhani said Iran’s approach is to de-escalate tensions in the region and in the world as well.

Pointing to the fact that Yemeni crisis has no solution but ending war and establishing intra-Yemeni talks, he urged all countries to make efforts in line with stopping bloodshed and bombardment in Yemen and also sending humanitarian aid to the oppressed people.

Iran is interested in promoting bilateral cooperation with the UK in all fields; Rouhani said noting that developing banking ties will lead to broadening economic and investment ties between the two countries.

May, for her part, expressed condolences over the recent deadly terrorist attack in southwestern Iran.

Pointing to the importance of preserving Iran nuclear deal, she emphasized Tehran-London efforts in this regard.

Only political solutions will work for crisis in Yemen, she said, urging all to play a major role in issuing humanitarian assistance to Yemeni people.

May hailed developing cooperation with Iran in economic and energy fields.