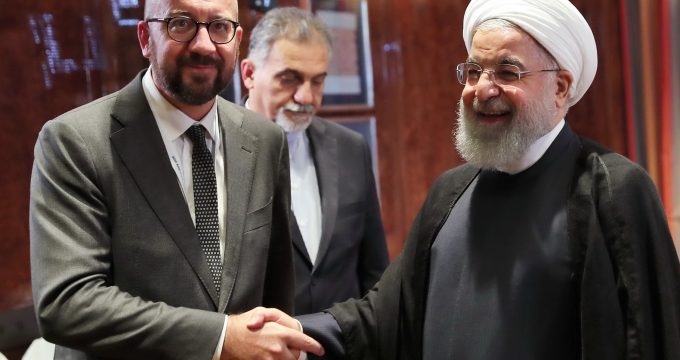 Tasnim – Iranian President Hassan Rouhani the European Union should live up to its undertakings under the 2015 nuclear deal known as the Joint Comprehensive Plan of Action (JCPOA) to save the accord following the US exit.

“Preserving the JCPOA is the common heavy responsibility of all of us, and the European Union faces a great test, not just before Iran but before the world, and everyone is waiting for Europe to fulfill its obligations,” Rouhani said at a meeting with Belgian Prime Minister Charles Michel in New York on Tuesday.

“Iran has met all of its obligations and this has been mentioned in the numerous reports by the International Atomic Energy Agency (IAEA),” he said.

Rouhani further described the EU’s political stance on the JCPOA as “solid and good”, but said Iran wants to see the EU’s practical steps to save the deal.

The Belgian premier, for his part, emphasized on his country’s determination to expand and deepen relations with Iran, and said Belgium is “a supporter of multilateralism” and does not hesitate to try to save the JCPOA.

Heading a high-ranking delegation, Rouhani arrived in New York on Sunday evening to participate in the annual meeting of the United Nations General Assembly.

Speaking to reporters at John F. Kennedy International Airport upon his arrival, Rouhani said he would have sideline meetings and interviews during the trip.

The president also said that the UNGA provides an opportunity for a better explication of the US breach of international regulations.

On May 8, US President Donald Trump pulled his country out of the JCPOA, which was achieved in Vienna in 2015 after years of negotiations among Iran and the Group 5+1 (Russia, China, the US, Britain, France and Germany).