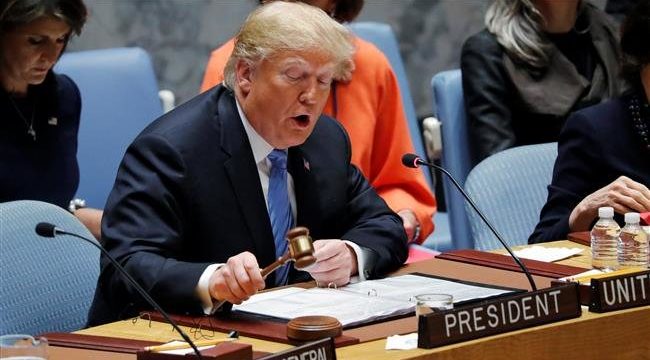 After being mocked at UNGA, Trump leads Security Council meeting; Iran on agenda

Press TV – The US has chaired the UN Security Council meeting on the non-proliferation of weapons of mass destruction, with the 2015 Iran nuclear deal on the agenda, one day after President Donald Trump’s speech that attacked Tehran at the General Assembly but during which he was also mocked for touting his domestic policies.

Trump on Wednesday opened the meeting, which the US initially said would focus on Iran, but later broadened the agenda to include nuclear non-proliferation and weapons of mass destruction.

It was Trump’s first experience in leading a session of the UNSC, where the US currently holds the rotating presidency.

During the Security Council meeting, Trump threatened that any individuals or entities that fail to comply with Iran sanctions will “face server consequences” and stressed that the US will ensure Iran will never get a nuclear bomb.

He also said that the US will pursue tougher Iran sanctions, “tougher than ever before,” and defended re-imposing sanctions on Iran, citing its “malign conduct.”

He once again accused Tehran of supporting terrorism and alleged that Iran was “the world’s leading sponsor of terrorism” and that the Islamic Republic fuels conflict across the region.

US President Donald Trump chairs a UN Security Council briefing on counter-proliferation during the 73rd session of the United Nations General Assembly at the UN headquarters in New York, US, on September 26, 2018. (Photo by Reuters)

Trump, however, thanked Iran, Russia and Syria for pulling back from an offensive against militants in Syria’s northwestern province of Idlib, the last major terrorist bastion in the Arab country.

Last week, Russia and Turkey reached a deal to create a demilitarized buffer zone to separate Syrian government troops from Takfiri militant groups in Idlib. Iran welcomed the agreement as the fruit of “intensive responsible diplomacy” meant to avert a war in Idlib.

Also in his remarks, Trump accused China of meddling in the US upcoming mid-term elections, saying, “Regrettably, we found that China has been attempting to interfere in our upcoming 2018 election coming up in November against my administration,” without offering further details.

Touching on Korean denuclearization, Trump said the world should expect “very good news” in the coming months and years from North Korea.

But he also called for the enforcement of sanctions, imposed over the past years in response to North Korea’s nuclear and missile tests.

“Unfortunately, to ensure this progress continues, we must enforce existing UN Security Council resolutions until denuclearization occurs,” Trump said, adding, “The safety of the Korean Peninsula, the region and the world depends on full compliance.”

In a direct response to Trump, Swedish Foreign Minister Margot Wallstrom said her country will be standing by the European Union’s support for the Iran nuclear deal that Trump has abandoned.

Swedish Foreign Minister Margot Wallstrom speaks during the United Nations Security Council briefing on counter-proliferation at the United Nations in New York on the second day of the UN General Assembly on September 26, 2018. (Photo by AFP)

She said that the EU is working on how to set up a financial facility that will help companies do business with Iran following the US imposition of sanctions.

Also speaking at the meeting was French President Emmanuel Macron who said that sanctions and containment were not solutions to the Iranian issue.

He said that Iran has lived up to its commitments under the 2015 nuclear deal, known as the Joint Comprehensive Plan of Action (JCPOA), and so should other signatories to the deal.

British Prime Minister Theresa May also defended the JCPOA as an “important” achievement, and stressed that her country will be committed to preserving the agreement as long as Iran lives up to its commitments.

Meanwhile, Chinese Foreign Minister Wang Yi also said that the JCPOA was “unanimously” endorsed and described it as a “viable agreement.”

He also said that every nation’s “legitimate right” to have trade with other countries, including Iran, should be respected.

Russian Foreign Minister Sergei Lavrov, for his part, regretted the US’s withdrawal from the JCPOA, saying it posed a threat to the global non-proliferation regime.

He said that Iran was “strictly abiding” by its commitments under the JCPOA as confirmed by the International Atomic Energy Agency.

Russian Foreign Minister Sergey Lavrov speaks during the United Nations Security Council briefing on counter-proliferation at the United Nations in New York on the second day of the UN General Assembly on September 26, 2018. (Photo by AFP)

He reaffirmed his country’s determination to keep the JCPOA alive, and said dismantling the deal was counter-productive.

Bolivia’s President Evo Morales also lashed out at the United States and accused Trump’s administration of meddling in Iran.

“Bolivia condemns the US’s unilateral policy against Iran. We condemn America’s withdrawal from the nuclear deal and … interference in the affairs of this brother country,” he added.

Kuwait says Israel must be forced to join NPT

Kuwaiti Foreign Minister Sheikh Sabah al-Khalid also said that Iran has been committed to its nuclear obligations. He also singled out Israel as the only nation that has refused to join the Non-proliferation Treaty (NPT), stressing it must put its nuclear program under international surveillance.

The UN Security Council meeting came one day after Trump used his address to the 73rd session of the General Assembly on Tuesday to attack Iran, and promised hard-hitting sanctions against Tehran while urging the world to isolate the Islamic Republic.

The US president started his speech by bragging about his domestic accomplishments before addressing his foreign policy priorities. He boasted that his administration had accomplished “more than almost any” other presidents in US history. The remark drew laughter from the audience of world leaders.

He accused the current US administration of violating the rules of international law by withdrawing from the 2015 nuclear deal that Iran signed with six world powers, including the US.

He also emphasized that the US is pushing other countries to violate the Iran deal, known as the Joint Comprehensive Plan of Action (JCPOA), and that it is threatening all countries and international organizations with punishment if they comply with Security Council Resolution 2231, which endorsed the JCPOA.

After announcing Washington’s withdrawal from the JCPOA, Trump re-imposed the anti-Iran sanctions which had been lifted under the accord. The Trump administration has also been seeking to put even more economic pressure on the Islamic Republic by threatening the European firms doing business with Tehran with punitive measures.

Rouhani said in his speech that “unilateral and illegitimate” sanctions imposed by the US against Iran are tantamount to “economic terrorism” and are in violation of world nations’ right to progress.

He further noted that the US policy vis-à-vis the Islamic Republic of Iran has been wrong since the victory of the Islamic Revolution in 1979.