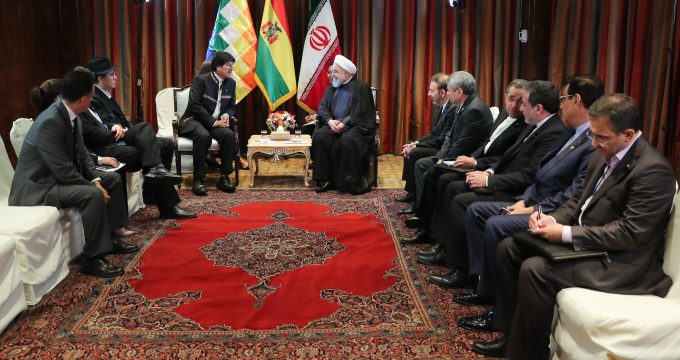 President Rouhani urges int’l community to stand against US disloyalty

IRNA – Iranian President Hassan Rouhani called for international community to stand firmly against US breach of its commitments.

President Rouhani made the remarks Monday in a meeting with Bolivian counterpart Evo Morales which was held on the sidelines of the 73rd session of the United Nations General Assembly (UNGA) annual meetings.

He described as important resistance of Iran and Bolivia against US unilateralism and intervention.

‘The interests of independent countries make us stand by each other against foreigners’ bullying and interventions,’ he added.

‘Iranian people are standing by friends and will support them is all stages,’ Rouhani reiterated.

Iran and Bolivia have a lot in common, he said urging both sides to attempt for developing their cooperation.

The Islamic Republic of Iran is determined to develop its relations with Latin American countries in economic, medical, scientific, and technological fields.

He also underlined the importance of developing cooperation between private sectors.

Referring to US unilateral and illegal withdrawal from Iran nuclear deal, President Rouhani said today all countries except only a few have adopted firm stances against US act.

Elsewhere in his remarks, the Iranian president praised Bolivia for its sympathy with Iran over recent terrorist attack in southwestern city of Ahvaz, saying the terror act indicated that all countries should be together to fight terrorism.

There is no terrorist group which does not enjoy US supports, he said, adding that most of the terrorist groups are under the US financial and arm support.

Meanwhile, Morales expressed condolences over the terrorist attack in Iran.

Iran and Bolivia have many commonalities in fighting for freedom, he said.

He also stressed the importance of developing relations, saying Iran and Bolivia are strategic partners.

Bolivian president referred to US walkaway from Iran nuclear deal also known as the Joint Comprehensive Plan of Action (JCPOA), saying US has always been after intervention in affairs of independent countries.

We declare our support for Iran in the United Nations Security Council, Morales reiterated.