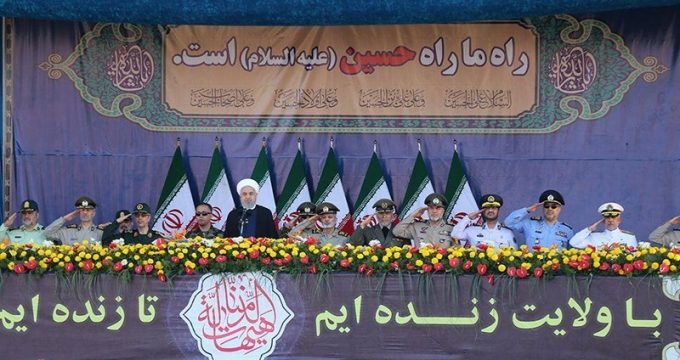 Tasnim – Iranian President Hassan Rouhani scorned the US call for Tehran to abandon its missile capabilities and curtail its regional influence, saying Iran will keep boosting its missile program that has exasperated the US.

In an address to a military parade marking the Sacred Defense Week in Tehran on Saturday, Rouhani roundly rejected the US call for Iran to abandon its defense capabilities.

“Iran will not either abandon its defense weapons or reduce its defense capabilities,” he said.

The president also gave an assurance that Tehran will “constantly boost its defense power”, adding that the fact that Washington is uneasy about Tehran’s missile power signifies that “our most effective weapon is missile.”

As regards the US push to limit Iran’s regional clout, Rouhani hit back at the US for deploying forces to the Middle East from thousands of kilometers away, saying Iran has always been a guardian of the Persian Gulf, Sea of Oman, Indian Ocean and Bab-el-Mandeb strait.

Rouhani further highlighted Iran’s support for oppressed nations in the region, saying while the people of Iraq, Syria, Lebanon and Yemen have close bonds with the Iranian nation, the US has supplied two certain countries with weapons and missiles for bombing the impoverished Yemenis.

He also likened the US government’s withdrawal from the 2015 Iran nuclear deal to former Iraqi dictator Saddam Hussein’s aggression against Iran in 1980, denouncing the US president as an aggressor who “does not respect any international law and has reneged on commitments to a multilateral agreement that had been endorsed by the UN Security Council.”

Rouhani then warned US President Donald Trump that he will meet the same fate as Saddam Hussein, saying Washington is trying to irritate Iran and force it to withdraw from the JCPOA in order to hold Iran accountable.

On May 8, Trump pulled his country out of the JCPOA, which was achieved in Vienna in 2015 after years of negotiations among Iran and the Group 5+1 (Russia, China, the US, Britain, France and Germany).

Washington has also called for a new, revised JCPOA that would address Iran’s missile program and regional policies.