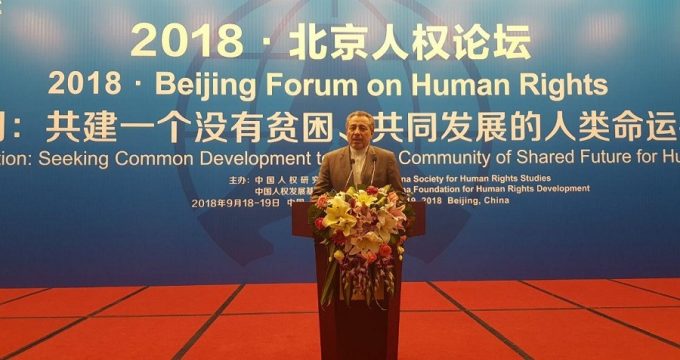 IRNA – Hundreds of officials and scholars from 50 countries, including Iran, and regional and international organizations attended the 2018 Beijing Forum on Human Rights in Beijing, which ended on Wednesday after a two-day work.

The theme of the two-day forum was ‘Poverty elimination: Seeking common development to build a Community of Shared Future for Human Beings.’

Iran’s former ambassador to Norway and senior expert in human rights studies of the Foreign Ministry’s Institute for International and Political Studies, Hossein Rezvani, represented Iran in the Forum.

He made distinction on diversified types of poverty and the root causes of the phenomenon and said factors such as illiteracy, high divorce rate, population growth, contagious diseases and environmental problems as drought, quake and flood are among causes of poverty.

He said unfavorable and curbing conditions in international economy and trade such as extraterritorial unilateral measures like sanctions, which is illegitimate and in violation of international law and among main reasons of poverty, result in denial of economic and living rights of the target country’s citizens and in some instances deny their rights of living.

The expert went on to say that the US sanctions on different countries, especially Iran, are an outstanding example of tyrannical unilateralism as is testified by observations and evaluation of the special rapporteurs.

He added that the sanctions pose serious challenges to international community’s efforts to eliminate poverty and access adequate growth.

He announced the sanctions, which are re-imposed on Iran in various economic, trade and banking domains following illegal withdrawal of the administration of the US President Donald Trump, have caused forex fluctuations, making supply of vital medicine and certain other needed imported goods difficult, thus bringing about special adverse consequences for the vulnerable class of society.

He said such sanctions have sparked fall in the rate of development and deprived people of meeting their economic rights, which are clear instances of violation of human rights of Iranians by the US. ‘Such unilateral, illegitimate and illegal sanctions of the US are examples of using inhumane instruments. A few countries and companies, which have surrendered to the US pressure and intimidation and contributed to the sanctions, have in fact moved against humanity, rights of women and children and citizens of Iran.’

Rezvani said those imposing sanctions have violated the UN Charter provisions as well as the most basic principles of international human rights and breached international and UN regulations. ‘So doing, they help formation of a precedence and trend which would hit them back under another circumstance and time. Such an international forum, which is held to uproot poverty from lives of human being community through identitying the root causes and the way of overcoming it to attain sustainable development, is suitable. It should also look into the external root factors and causes of poverty like what was described.’

Rezvani said the Joint Comprehensive Plan of Action (JCPOA) is an important international document and is legally binding per the UN Security Council (UNSC) approvals and international law. The responsibility and consequences of the US’ JCPOA withdrawal do not lie with the country but other 5+1 countries, which are responsible to safeguard it and make up the damage caused as a result of the US leaving.’

Elsewhere in his remarks, Rezvani said Iran has always been ready to have active contribution to promotion of human rights.

He said experience sharing and respectuful and constructive dialogue are the best way of human rights improvement.

He hoped that the forum decisions will help economic growth through elimination of poverty and creation of society provided by welfare and acceptable standards and sustainable development.