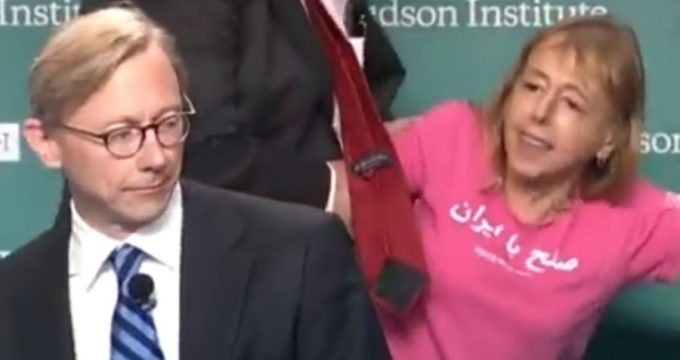 IRNA –US peace activist Medea Benjamin on Wednesday protested to Washington’s warmongering policies against Iran after a speech by head of US think tank Brian Hook.

Benjamin, 66, is the co-founder of Code Pink institute which introduces itself as a ‘grassroots peace and social justice movement working to end U.S.-funded wars and occupations.

‘You are making a case for a war with Iran. How did the war with Iraq turn out? You’re doing exactly the same thing as we did in the case of Iraq,’ Benjamin shouted after Hook finished the first part of his speech at the Hudson Institute discussing the need to stop what he claimed to be the Iranian nuclear proliferation.

Hook is the US Special Envoy to Iran and also an advisor to Secretary of State Mike Pompeo.

‘No more war. Peace with Iran,’ Benjamin shouted as she suddenly stepped on the stage after Hook’s speech.

She was on stage about one minute before being pulled out by security forces handcuffed.

She criticized US withdrawal from the historic nuclear deal officially known as the Joint Comprehensive Plan of Action (JCPOA) which was signed in 2015 between Iran and the world six major powers including US, Britain, Russia, France and China plus Germany.

on May 8, 2018, US President Donald Trump announced the US withdrawal from the deal amid protest of most of its allies, mainly the European Union, who supported the landmark agreement and urged the President Trump to keep the JCPOA.

‘The Germans. The French. The British. They want to keep in this deal. The world community wants to keep the deal,” Benjamin shouted while she was being removed from the stage by the security guards.

Referring to Hook’s remarks about expecting Iran to act as a normal country, Benjamin ironically said, ‘Let’s talk about Saudi Arabia. Is that who our allies are? They are the biggest threat to the world community… It is the Saudi bombing that is killing most people in Yemen.’

Criticizing Hook’s remarks and the points about Iran sanctions, Benjamin who was being cornered by security forces said, ‘I wanna ask: do you think these sanctions are hurting the regime, or are they hurting the Iranian people?’

‘No more war. Peace with Iran,’ she chanted while she was carried out by the security.

We want no more war in the Middle East, she added.

The Hudson Institute that was broadcasting Hook’s speech live censored Benjamin’s protests and showed no image of the conference hall before the start of a Q&A session.