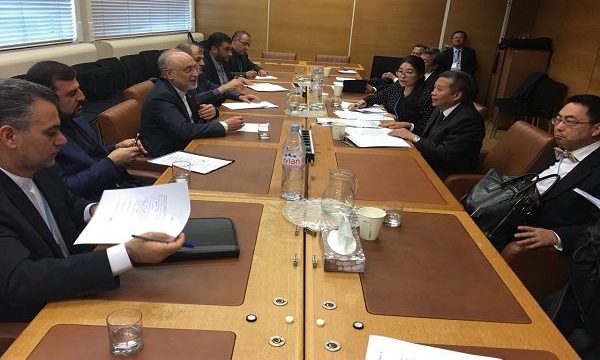 MNA – Head of Atomic Energy Organization of Iran, Ali Akbar Salehi, in a meeting with Director of the China Atomic Energy Authority (CAEA) Zhang Kejian emphasized cooperation on the construction of small and medium-sixed reactors in Iran.

Holding a meeting on the sideline of the 62nd Annual Regular Session of the IAEA General Conference on Wednesday in Vienna, Salehi and Zhang discussed strategic nature of bilateral relations between the two countries, support for JCPOA against American unilateralism, promising cooperation between the two countries in nuclear fields, including power plants, training and nuclear security.

Zhang called the relations between Iran and China of strategic nature, and highly regarded the meetings between the presidents of the two countries.

Salehi, for his part, expressed hope that the field of nuclear cooperation will be of interest to the two sides.

“The project for the modernization of Arak heavy water research reactor is progressing and we welcome the effective cooperation of China in this regard,” he noted.

The Chinese side also focused on two areas of trade and energy in bilateral relations, reaffirming China’s support for JCPOA.

Director of the China Atomic Energy Authority (CAEA) Zhang Kejian added “Arak modernization project is a multilateral JCPOA project and we highly regard progress in this regard.”