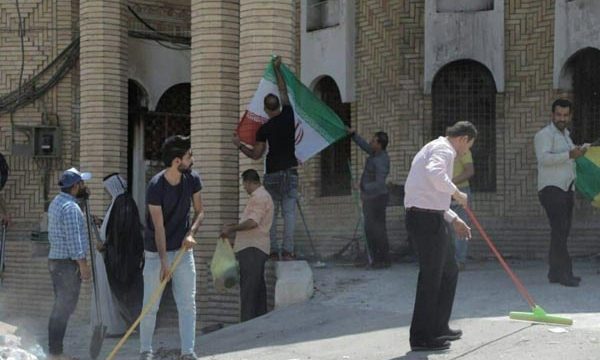 Press TV – An Iraqi lawmaker says the US is to be held responsible for the recent unrest in Basra, warning that the presence of the American consulate in the oil-rich city endangers Iraq’s security and sovereignty.

Intisar Hassan al-Musawi said that “the US consulate and some civil society organizations” were behind the Basra violence, which left at least 13 people dead and dozens more injured, the Kurdish NRT channel reported.

“The US consulate in Basra poses a threat to the security and sovereignty of the country,” she added.

Earlier this month, Basra was rocked by deadly protests for several days. The demonstrations took an ugly turn on September 7 when a group of masked assailants raided government buildings and offices of political parties and set them ablaze.

The Iranian consulate and the provincial office of Iraq’s Hashd al-Sha’abi were among the premises gutted in the rampage.

Musawi, of the Fatah (Conquest) alliance which finished second in the May parliamentary elections, stressed that the US consulate was accountable for the attack on the Hashd al-Sha’abi office.

“The presence of the US consulate in Basra is a danger to the province as [it is] the body directly responsible for burning the offices of the Hashd al-Sha’abi,” she said.

Several Iraqi officials said that the US had instigated the Basra violence in a bid to sow discord among political parties.

The White House said in a statement later that it would hold Tehran responsible if its consulate in Basra and its Baghdad embassy were attacked.

This drew a reaction from the Islamic Republic which rejected what it described as “astonishing, provocative and irresponsible accusations,” stressing that Washington could not cover up its involvement in fomenting tensions in Iraq through blaming others.

Iran’s Foreign Ministry spokesman Bahram Qassemi emphasized that the recent unrest in Iraq was the outcome of US policies and its “unwise and short-sighted policy, either covert or overt, to support groups promoting and spreading violence and extremism.”

Elsewhere in her remarks, the Iraqi lawmaker said that the new parliament is expected to discuss the pullout of US forces from Iraq.

“The fourth parliamentary session will see actions to remove US forces from Iraq and [reduce] the number of employees working at the embassy and consulate,” Musawi said.

The US, backed by the UK, invaded Iraq in 2003 under the pretext that the former regime of Saddam Hussein possessed weapons of mass destruction. No such weapons, however, were ever found in the country.

The invasion plunged Iraq into chaos and led to the rise of terrorist groups.

The US and a coalition of its allies further launched a military campaign against purported Daesh targets in Iraq in 2014, but their operations in many instances have led to civilian deaths.