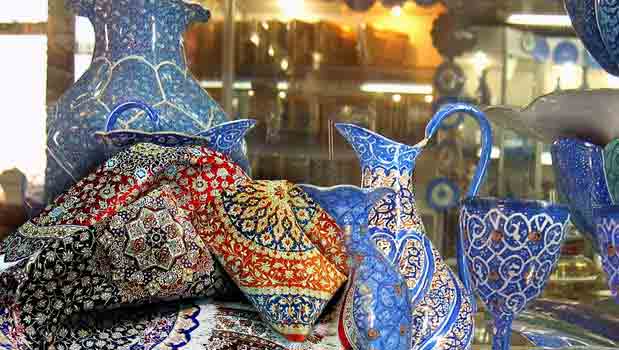 The Hague hosts some 100 Iranian handicrafts

MNA – Some 100 Iranian handicrafts are being showcased in the Municipal Museum The Hague, in the Netherlands.

An exhibition under the title ‘Splendor and Bliss, Arts of the Islamic World’ opened in the Municipal Museum The Hague on Saturday with Iran’s Ambassador to the Netherlands Alireza Jahangiri and The Hague’s Mayor Pauline Krikke in attendance.

300 objects relating to Islamic art in the period 900-1900 are being showcased in the exhibition, out of which some 100 items are from Iran.

The Municipal Museum The Hague (in Dutch: Gemeentemuseum Den Haag) is an art Museum built in by Dutch architect Berlage in 1931-1835. It has the largest Mondrian collection in the world.

According to the museum’s official website, ‘Splendor and Bliss’ brings together many highlights of Islamic art. The exhibition, full of splendor and majesty, will focus on the ornamental character of Islamic art and on stories of culture, tradition and craft.

Much of the art from the Islamic world features highly detailed ornamentation. The rich decorations have a religious character, reminding the faithful of all the wonderful things that await them in the afterlife. It will unravel the unique, positive Islamic symbolism while considering how the objects were used and made. The exhibition will thus be an ode to craftsmanship. Ancient techniques like glass blowing, wood carving, calligraphy and rug making reveal stories of culture, tradition and patronage, and the role of Islamic culture in the world.

Nearly 200 Iranian antique items from National Museum of Iran is currently being showcased in Assen-based Drents Museum, the Netherlands. The exhibition, titled as ‘Cradle of Civilization’ started on June 7 and goes through November 18.

Also, the head of Cultural Heritage, Handicrafts and Tourism Organization, Ali Asghar Mounesan said today that a 300-item collection of Dutch artworks and artifacts will be exhibited at the Tehran-based National Museum of Iran in the coming month.

PHOTO: The above picture shows one of the items of this exhibition. According to the Dutch museum’s official website, it is a tile with a diameter of 38.5cm, shaped as a star, which has been made in Eastern Iran in mid-15th century.