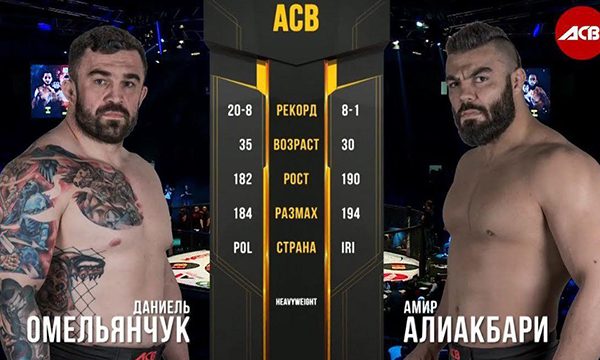 During the fight in Russia’s Krasnodar, Aliakbari and Omielanczuk battled against each other in three five-minute rounds.

Aliakbari managed to defeat his Polish rival in the third round, claiming victory in his second fight in the ACB, a report by ISNA said.

Aliakbari first sought to get close to his rival and have him fall on the ground through wrestling techniques and then win the game by hitting him on his face and head.

He failed in his goal during the first two rounds but by the beginning of the third round, he quickly threw the Polish fighter on the ground and immediately attacked him by beating him with strong punches on the face and head.

This came as the referees made a strange decision to stop the fight for at least three minutes to give the Polish fighter a chance to get refreshed but to no avail because Aliakbarai won the game finally.

This was the Iranian fighter’s second crushing victory in the ACB.

He has fought nine times in ACB with eight victories and one defeat. He carried out his first fight in 2018 ACB in Azerbaijan, overcoming his Estonian rival.

As a former Greco-Roman wrestler, Amir Aliakbari is currently in the heavyweight division of ACB. His rival, Omielańczuk (born in 1982) has been a professional MMA competitor since 2009. He has competed for the UFC, ABC and Konfrontacja Sztuk Walki.

ACB is an MMA, kickboxing and Brazilian jiu-jitsu organization in Russia and one of the leading promotions in Europe.