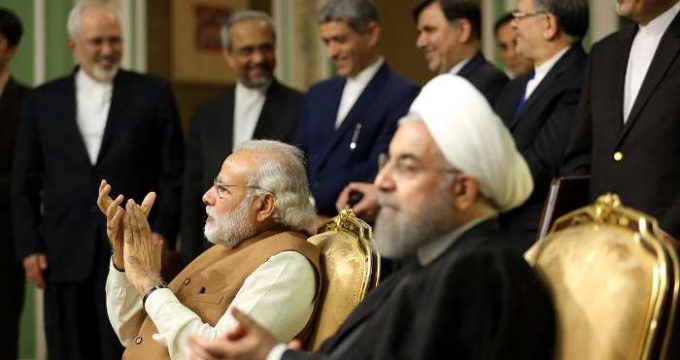 MNA – Director of Contemporary South Asian Studies Program at University of Oxford, Kate Sullivan de Estrada, said in an interview that the notion of zero imports of Iranian oil to India seems as both economically and politically unrealistic.

India and US held the inaugural 2+2 talks in New Delhi on Thursday, in which the issue of Iranian oil imports figured prominently, according to sources. While the US delegation led by Secretary of State Mike Pompeo urged India to completely halt Iranian oil imports, New Delhi refused to give any clear and categorical response, thereby thwarting the agenda of the visiting delegation.

In an interview with Tehran Times, she said that the idea of halting or markedly decreasing Iranian oil imports will be seen in India as yielding to US pressure and internationally also India may not wish to be seen as on the same side as the US under its current, unpredictable leadership. She believes the notion of zero imports of Iranian oil to India seems is both economically and politically unrealistic.

Following are the excerpts:

US President Donald Trump earlier this year ordered re-imposition of unilateral sanctions on Iran after withdrawing from the 2015 Iran nuclear deal. Since then the US has been trying to persuade countries to economically isolate Iran. Don’t you think Trump’s target of zero imports of Iranian oil is plainly unrealistic?

It depends what you understand by ‘unrealistic’. In practical terms, plans do seem to be underway for the reallocation of Iran’s oil production share to other OPEC countries, and at least one news source suggests that India’s Ministry of Petroleum and Natural Gas has asked for alternatives to Iranian oil to be explored and for refiners to prepare for a marked drop or cessation of Iranian oil imports. Of course any alternative will be far more costly than India’s current import arrangements with Iran.

In domestic political terms, too, there remains a strong political narrative in India that the country will never let another nation dictate its foreign policy. Halting or markedly decreasing Iranian oil imports will be seen by some as yielding to US pressure.

Internationally, too, India may not wish to be seen as on the same side as the United States under its current, unpredictable leadership. The notion of zero imports of Iranian oil to India seems then to be both economically and politically unrealistic, even if perhaps possible in practical terms.

US Secretary of State Mike Pompeo led delegation held 2+2 talks in New Delhi on Thursday during which the US delegation reportedly urged India to completely halt oil imports from Iran. India, sources say, expressed inclination to continue oil trade with Iran, although no official decision has been made yet. What do you think India will do?

Indian officials have said that India ‘will act in its interests’. This is a vague statement, but it reflects the enormous complexity of the economic and geostrategic challenges posed by being a friend of both Iran and the United States, being heavily dependent on oil imports, and being close to election time.

India’s likely response will be to hedge – to find a way of reducing imports to some extent to signal goodwill to the US, but to continue with Iranian oil imports as far as possible. The delay of an official decision from India also has utility in so far as India may be able to extract concessions from one or both sides as it weighs its options – such as, for example, Iran’s recent offer of almost free shipping and an extended credit period of 60 days.

Of course, the question of Iranian oil imports is about much more than just the oil. The US may be a growing defense and trade partner of India at a moment when it is facing an increasingly assertive China, but India has strong historical, cultural and political ties with Iran, and New Delhi recognizes well that it needs good friends in the region, too.

Iran is critical to India’s energy security and other geopolitics interests. Do you think India can afford to cut oil imports from Iran under the US pressure, given the exceptional concessions and discounts given by Iran?

Regardless of what decision India makes, the US sanctions on oil trade with Iran will be damaging to the Indian economy. India will certainly seek some alternative supplies, meaning import costs will rise. Given that we are in the run up to the May 2019 election, the Indian government may also seek to subsidize the increase in petroleum prices through tax reductions, which will incur further gross fiscal costs. But the Indian economy is in a far stronger position today than it was in the early 1990s.

In 1991, mounting fiscal and balance of payment difficulties combined disastrously with an increase in the oil price bill stemming from the Gulf War, and India famously had to physically transfer 47 tons of gold to the Bank of England as collateral for an IMF loan. Today, India is better positioned to weather the storm of more costly oil imports, in gross economic terms, at least.

According to reports, Pakistan’s military has secretly sought to engage with India to resolve outstanding issues. Do you think, with the new government in Islamabad, we can expect betterment of ties between the two South Asian estranged neighbors?

I think we will need to wait until the Indian elections next year before any substantive progress can be made on India-Pakistan relations.

Kate Sullivan de Estrada is a noted commentator and author with expertise on South Asia. She is currently serving as Director of Contemporary South Asian Studies Program at University of Oxford.