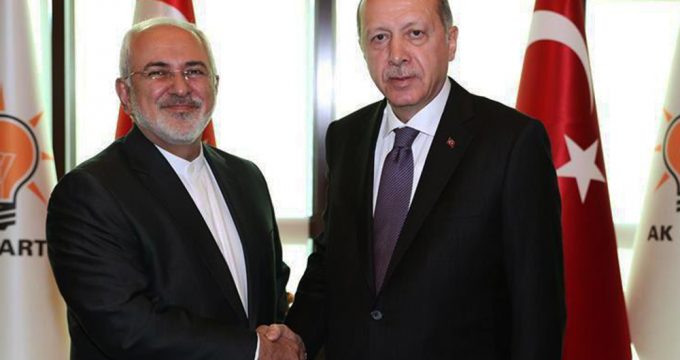 Zarif, who is currently in Ankara, held talks with Erdoghan in a meeting attended by his Turkish counterpart Mevlut Cavusoglu late Wednesday.

Prior to meeting with Zarif, the Turkish foreign minister said that he will discuss bilateral relations and Syria situation with his Iranian counterpart.

Asked whether the issue of US sanctions is to be raised during the meeting, he said that it seems the Iranian side would put forward the issue.

Upon arrival in Ankara, Zarif told reporters that the Turkish government and president showed remarkable resistance against US pressures.

“What we have always sought and our neighbors also favored was development of legitimate economic communications between the two countries regardless of others’ desires and pressures,” Zarif said.

“We have always looked at Turkey as a neighboring state and a good economic partner as a country we have had cooperation on regional issues and regular consultations,” he said.

Consultations between Iran and Turkey continued at different levels over the past months, Zarif said, noting that a trilateral meeting between Iran, Turkey and Russia is scheduled to be held next week.

Zarif said that he is in Ankara to explore avenues for mutual cooperation and make arrangements for the trilateral summit in Iran.

During his meeting with Turkish president and foreign minister, Zarif invited them to attend the trilateral meeting salted for September 7 in Tabriz.

Presidents of the three countries are to attend the upcoming summit meeting in Iran.

First round of the summit meet between the three leaders was held in Sochi last year while the second was held on March 4 in Ankara.