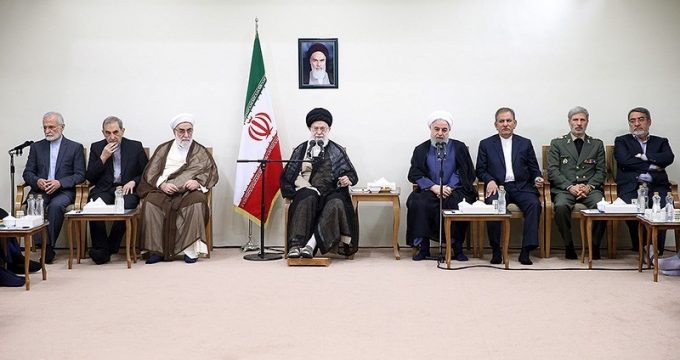 Tasnim – Iranian President Hassan Rouhani blamed US plots against the Islamic Republic for recent economic problems facing the country and said the Iranian nation will foil the conspiracies through their resistance and unity.

Speaking at a meeting with Leader of the Islamic Revolution Ayatollah Seyed Ali Khamenei attended by the cabinet ministers in Tehran on Wednesday, Rouhani pointed to the US sanctions and said, “In today’s situation, we are facing no political solution because the (US) government that has imposed sanctions on Iran contrary to all international rules does not adhere to anything.”

He further said the Americans are trying to return to Iran once again and establish their dominance over the country through economic pressures.

“They want to undermine Iran’s independence again and rule the Iranian people, but our nation will never accept such a thing and will show this to the world with their resistance,” the president added.

US President Donald Trump signed an executive order on August 6, re-imposing many sanctions on Iran, three months after pulling out of the 2015 nuclear deal.

He said the US policy is to levy “maximum economic pressure” on the Islamic Republic.

Trump also restated his opinion that the Iran nuclear deal known as the Joint Comprehensive Plan of Action (JCPOA) was a “horrible, one-sided deal”.