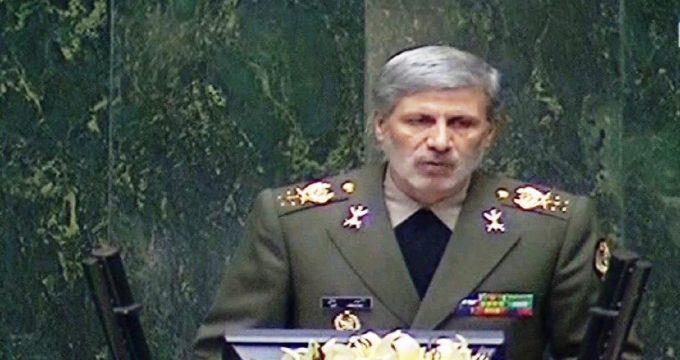 MNA – Iranian Defense Minister hoped that the parliament would develop a more special view about the country’s defense budget since enemies are spending billions of dollars to create instability in the region.

Brigadier General Amir Hatami made the remarks on Wednesday in a meeting with members and chief of the National Security and Foreign Policy Commission of the Iranian Parliament.

“I hope that the new chief of the National Security and Foreign Policy Commission would hold a more special view on the defense budget of the country, because today we have enemies who spend billions of dollars to create insecurity and instability in the region and to upgrade their military forces,” he said.

The experts of defense industry are working hard to improve the country’s defense capabilities and this has led to the fact that Iran’s enemies no longer talk about military options since they have understood the country’s defensive potentials, he highlighted.

Elsewhere he touched upon his 3-day trip to Syria, saying that with the solidarity of Syria’s nation and government, and efforts of Resistance Axis, the great conspiracy of terrorism in this country has failed, and the long-term plan of enemy in the region has been foiled.

“Visiting Aleppo, we saw that the city which had been severely attacked by terrorists is now experiencing stability and security,” he added.

The Chairman of the commission Heshmatollah Falahatpisheh, for his part, appreciated the efforts made by defense industry in improving Iran’s defensive power, adding that the commission will try their best to fulfil the required budget of the ministry.