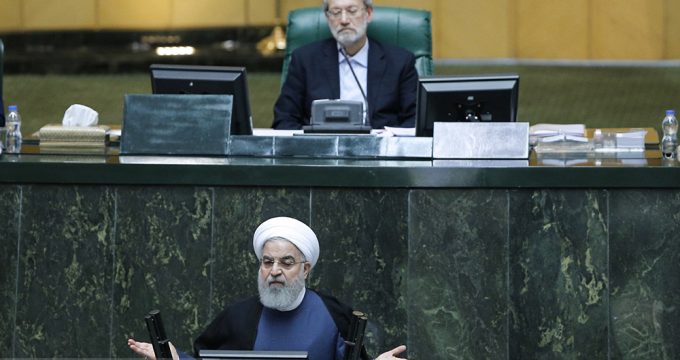 Majlis not to refer questions from president to Judiciary yet

IRNA – Parliament is not yet to refer to the Judiciary the four questions that President Hassan Rouhani’s answers to them were not convincing for the Iranian MPs at Tuesday session, said the spokesman for the Iranian Parliament’s presiding board.

Earlier in the day, President Rouhani attended Majlis open session to answer five questions raised by 82 out of 290 Iranian lawmakers about his government’s failure to control goods and currency smuggling, continuation of the banking sanctions, increased rate of unemployment, growing economic depression and increase in Forex rate.
The MPs were only convinced by President’s answer about one of the questions which related to the continuation of banking sanctions while his answers to other four questions failed to win the lawmakers approval.

Speaking to the Islamic Republic News Agency (IRNA) on the sidelines of Majlis open session, Behrouz Ne’mati said according to the Majlis regulations, questions from the president would only be referred to the Judiciary when it is proved that the government has violated a law or avoided to enforce it.

According to an amendment on the Article 213 of the Parliament Rules of Procedure, if majority of the representatives present in the session are not convinced with the response of the president to a question and the topic under question is considered a violation of the law or disobedience of the law, the question will be sent to the Judiciary, Ne’mati explained.

‘Majlis legal commission and experts will examine legal conformities with different laws to find if there has been any violation or disobedient,’ the spokesman said adding that the Parliament is likely to form a special committee to follow up the case.

Commenting on the issue, another member of the Majlis Mojtaba Zolnour told IRNA that the final decision about the questions from the president will be taken on September 2.

According to Article 88 of the Constitution of the Islamic Republic of Iran, the MPs can summon president or any of his ministers to Majlis for detailed explanations on specific issues when at least one-fourth of the total member of the Islamic Consultative Assembly asks a question from the president, or any of the MPs asks a question from a responsible minister about his duties.

The response of the president should not be delayed by more than a month and that of the minister by more than ten days; except with a valid excuse so recognized by the Islamic Consultative Assembly.