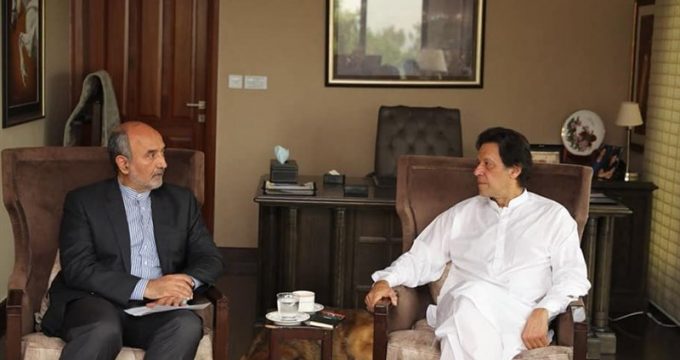 Is Imran Khan an opportunity for Iran?

Iranian Diplomacy – The rise of Imran Khan, a long-time critic of Pakistan’s mainstream politics, has raised both hopes and concerns in Iran. Can the new Prime Minister of Pakistan open a new chapter in Tehran-Islamabad relations and elevate the latter’s regional role? Pirmohammad Mollazehi, South Asia expert has discussed the prospects of Imran Khan’s premiership with Khabar Online. An abridged version of the interview follows:

What is your analysis of Imran Khan’s election to the premiership?

It is definitely a great change in Pakistani politics, and it signifies a shift in the balance of power between political parties and Pakistan’s powerful army. It can be seen as a new experience in Pakistani politics, since the ruling party is aligned with the army, but not appointed by the army. The policies of the former ruling party, Muslim League, and its leader Nawaz Sharif were against the interests of the army, be it in the domestic scene or the regional and international stage.

As much as it’s related to Iran, Tehreek-e-Insaf, Imran Khan’s party, can create both opportunities and threats for us. It depends on Iran’s approach towards the new circumstances. Apart from his domestic promises such as fighting corruption, Imran Khan has promised balance in regional and international relations. His materialization of those promises depends on the level of cooperation with the army.

“Imran Khan can be both an opportunity and a threat for Iran.” Can you explain that?

His premiership is an opportunity, as Pakistan, Turkey, and Iran are in tantrum with the United States. If Tehran acts intelligently, a security and defense alliance with Ankara and Islamabad is feasible. Economic partnership can also become stronger between the three countries. It can be a reincarnation of the CENTO pact under new circumstances. This is a moment of decision for Pakistan to see how it should position itself in regional and international relations: should it shift towards Iran or Saudi Arabia? Russia and China, or West?

If Iran can persuade Pakistan to tilt towards the East, a powerful Iran-Turkey-Pakistan-China axis can be established which consolidates peace and stability in the region. Pakistan is aware that United States has chosen India over Pakistan as its strategic partner in South Asia and that Islamabad no more holds the place it used to in Washington’s foreign policy.

How could Pakistan move in that direction?

Pakistan should first of all stop its double policy vis-à-vis radical Islamist groups. Islamabad has not yet decided to engage in serious fight against terrorist and extremist groups, and it supports those radical groups which serve its interests in India and Afghanistan. Iran should persuade Pakistan to give up this policy and move in a direction that better serves Pakistan’s national interests.

But Riyadh will not remain idle and witness Iran’s burgeoning influence in Pakistan?

Imran Khan will visit Iran at the first stage of his foreign tour, and he will go to Riyadh afterward. He seeks a balance in Islamabad’s relations with Tehran and Riyadh, and the situation is ripe for Pakistan to serve as a mediator between Iran and Saudi Arabia. The current tension between Tehran and Saudi Arabia which has led to a Sunni-Shia rift in the Middle East only serves the interests of Israel and the United States. A realistic attitude calls for negotiation and détente between the two countries, and Pakistan, which is a strong country, with nuclear arms and a population of 200 million, can help in this regard.