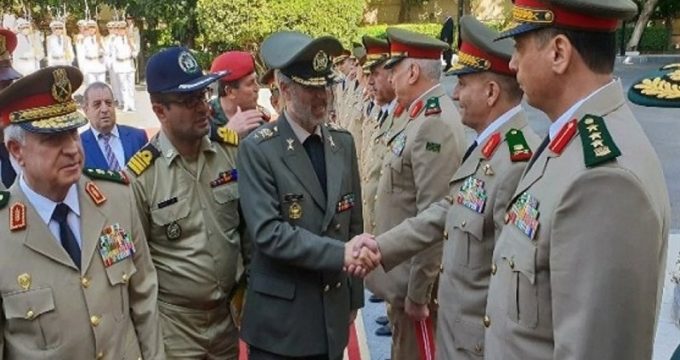 MNA – Iranian Defense Minister Brigadier General Amir Hatami praised the Holy Shrine Defenders as well as Syrian Army and people for their resistance and struggles to curb domination systems and their allies.

According to the Public Relations Department of Iran’s Defense Ministry, Brigadier General Amir Hatami made the remarks on the second day of his visit to Syria and during a meeting with the commanders of Axis of Resistance.

At the start of his address to the commanders, the Iranian defense minister expressed his happiness with the meeting and thanked all the forces of the Axis of Resistance for the sacrifices they have made to curb plots against Syria and Iraq.

He said that through the sacrifices and huge efforts made by the Resistance forces, Iraq and Syria could foil the plots designed by the Domination System and their puppets in the region.

Meanwhile, the Iranian defense minister said that the Resistance troops must remain prepared as the plots are going to continue.

He said that goal of the enemies’ conspiracies is to destabilize the region in line with their sinister objectives, saying “what can curb plots designed by the enemies is preserving the acquired capabilities, especially the strategic ones.”

Amir Hatami arrived in Syria on Sunday and has so far held meetings with his Syrian counterpart as well as President Bashar al-Assad.

Upon his arrival in Damascus International Airport, Hatami had said that an active participation in reconstruction of Syria was on the agenda of his trip.