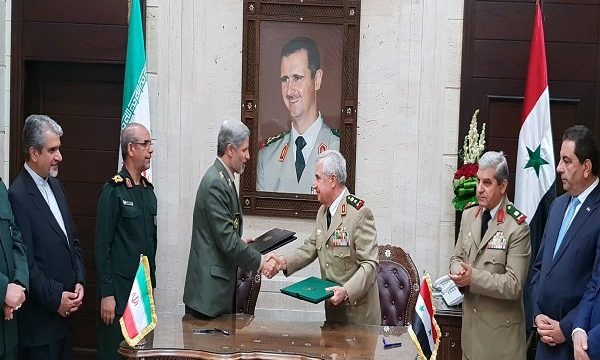 The accord was signed after comprehensive rounds of negotiations between Iranian defense minister and Syrian officials including Syrian President Bashar al-Assad. The pact highlights the expansion of defense and military cooperation between the Islamic Republic of Iran and the Syrian Arab Republic.

“This agreement paves the way for developing bilateral cooperation,” said the Iranian defense minister in the ceremony for signing the agreement.

“Syria is passing the phase of crisis to the phase of reconstruction and as a result the signed agreement will define the areas of presence, contribution and cooperation between Tehran and Damascus,” he highlighted.

Ali Abdullah Ayyoub, on his part, hailed the role of Iran in helping the Syrian government achieve remarkable victories against terrorists and the terror-sponsers.

“We will materialize our national interests in the light of bilateral cooperation and we won’t allow any party or country to affect the stable and solid relations between the two countries,” reiterated General Ali Abdullah Ayyoub.

Iranian Minister of Defense (MoD) Brigadier General Amir Hatami arrived in Syrian capital city of Damascus on Sunday afternoon at the head of a senior military and defense delegation.

“Syria’s full liberation will curb further foreign intervention in the affairs of the region,” he made the remarks upon arriving in Damascus.

Also in a meeting with Syrian President Assad, Hatami hailed the steadfastness of the Syrian people and leadership and their victory over terrorism as an example to follow not only for the peoples of the region but also for the entire world.