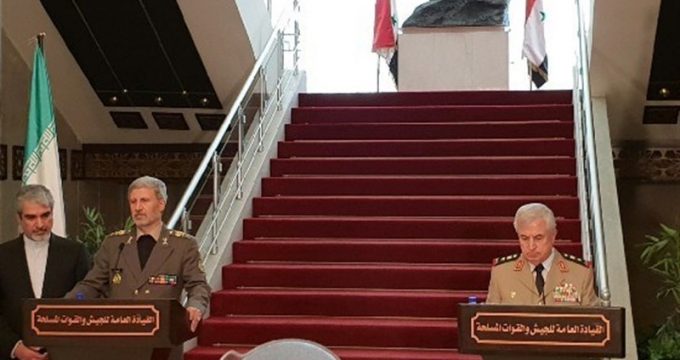 Press TV – Iran’s Defense Minister Brigadier General Amir Hatami has warned of extra-regional countries’ plots to sow discord in Syria, vowing the Islamic Republic’s full support for the war-ravaged country in a bid to preserve its territorial integrity and improve its stability.

“Iran will spare no effort to maintain Syria’s territorial integrity, because security in the country will help [improve] regional stability,” Hatami said in a meeting with his Syrian counterpart, General Ali Abdullah Ayyoub, in Damascus on Sunday.

He added that the eradication of terrorism in Syria would restore full security to the region and strip foreign powers of any pretext they might have for intervention in the country.

Heading a high-ranking delegation, the Iranian defense minister arrived in Damascus earlier on Sunday to discuss a number of important issues, including the latest regional developments, the fight against terrorism, the strengthening of the resistance axis and the study of strategies for expansion of defense and military cooperation.

Iran and Syria enjoy strategic relations. At the request of Damascus, Iran has been providing military advisory assistance to the Syrian government forces who are fighting an all-out foreign-sponsored militancy.

Iran’s military presence in Syria has been a thorn in the side of Israel. On April 9, an Israeli airstrike against the T-4 airbase in Syria’s Homs Province killed more than a dozen people, including seven Iranian military advisers.

Iranian Foreign Ministry Spokesman Bahram Qassemi strongly condemned the Israeli regime’s attack on the air base in Homs, saying it was a blatant violation of international law, which would strengthen terrorists.

“The Israeli regime’s aggression against Syria is a breach of this country’s national sovereignty and territorial integrity and runs counter to all international regulations and principles,” Qassemi said.

Tel Aviv wants Syria to ask Iranian advisers to leave the country and dismantle what it claims to be Iranian military bases.

Israeli Prime Minister Benjamin Netanyahu in May threatened that the regime will hit Iranian targets “anywhere in Syria,” where Iranian military advisors have been providing effective assistance to the national army in its battles against Tel Aviv-backed terror groups.

“We will continue to act against [Tehran’s] intention to establish a military presence in Syria across from us, not just across from the Golan Heights, but anywhere in Syria,” he said.

Syrian Foreign Minister Walid al-Muallem said in June that Iran has no military presence or bases in his country, but Iranian military advisors were there to help Damascus fight terrorist groups.

Syria will allow no county to harm ties with Iran

The Syrian defense minister, for his part, said Tehran and Damascus have strong relations, emphasizing that Syria would allow no country to harm its ties with Iran.

Ayyoub added that Syria would never be able to defeat terrorism without Iran’s cooperation and noted that Tehran and Damascus were sharing their experience on different issues.

He said major achievements made by the Syrian forces in their battle against terrorism have caused concern among enemies in the region, particularly the US and the Israeli regime.