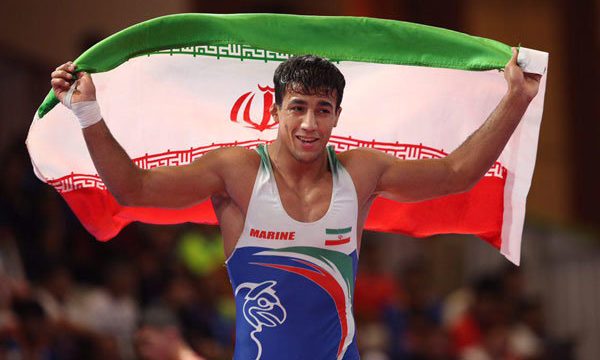 Mohammadali Garaei beat Akzhol Makhmudov from Kyrgyzstan in the final match of 77kg.

The Iranian wrestler defeated the Kyrgyz athlete, who is the former Asia’s champion and Olympic silver medalist, 7 to 3.

The Iranian wrestler had defeated a Chinese opponent in his first match 8-0 and in the next match, he took on an Indian athlete and won aginst him 8-6 to advance to the semifinal stage. He had entered the final match against Makhmudov after having defeated a Japanese wrestler 8-1 in the semi-final.

With his medal, Iran has so far bagged 7 gold, 3 silver and 6 bronze medals in the 2018 Asian Games which is currently underway in Indonesia.

Iran’s representative at 87 kg won the gold medal after wining the final match against an Uzbek opponent 13 to 4.

He had defeated two opponents from Turkmenistan and Yemen to advance to the final match against the Uzbek wrestle.

The 2018 Asian Games, officially known as the 18th Asian Games and also known as Jakarta Palembang 2018, is a pan-Asian multi-sport event being held from 18 August to 2 September 2018 in the Indonesian cities of Jakarta and Palembang.

According to the Olympic Council of Asia (OCA) a number of 42 sports and 484 events are contested at the 2018 Asian Games.