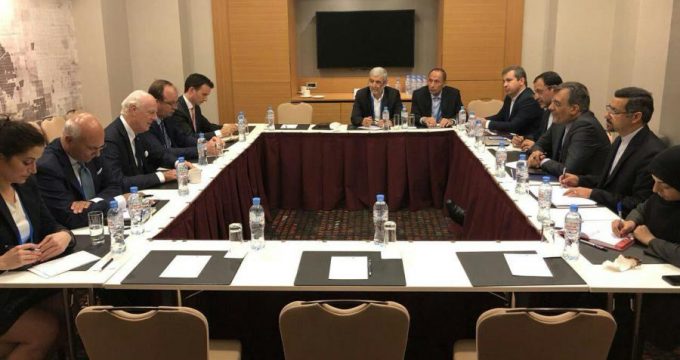 De Mistura to meet with representatives of Russia, Iran, Turkey

IRNA – A meeting between representatives of Russia, Iran and Turkey, the three guarantor states on Syria, with UN Secretary-General Special Envoy on Syria Staffan de Mistura will take place in early September, A Russian official said.

The presidential special envoy for the Middle East and Africa and deputy foreign minister Mikhail Bogdanov said ‘There will be a Geneva meeting between the representatives of the three guarantors of the Astana process -Russia, Iran and Turkey -and United Nations Special Envoy for Syria Staffan de Mistura.’

‘The meeting will be held before the United Nations General Assembly kicks off, from September 10-15, but no specific date has been determined so far. We seek to actively assist de Mistura, so we will discuss the establishment of a Syrian constitutional committee,’ TASS cited Bogdanov as saying.