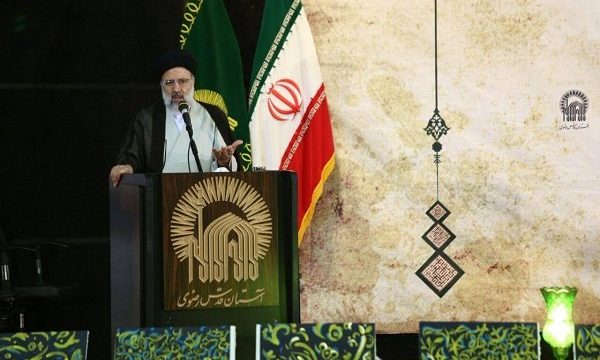 MNA – The Custodian of Astan Quds Razavi stressed the issue of Palestine as the most important issue of the Muslim World and condemned US’ intention to keep economic pressure on Tehran.

Center of Supervision on Mosques Affairs and presence of Imams and clerics of Tehran at Islamic Culture and Relations Organization held the 16th International Conference on World Mosque Day in Tehran.

Raeisi, the Custodian of Astan Quds Razavi and prominent preacher of this conference emphasized on the role of mosques as the fort and symbol of resistance for Muslims community.

He mentioned the issue of Al- Aqsa mosque as the most important issue of the Muslim World and asked for keeping alive the issue of Al-Aqsa till its liberation from Zionist regime.

“The Deal of Century theory is not a new phenomenon. Youth have to know the history of Palestine. They (Zionist regime and US) want some parts of Sina Desert of Egypt through the support of Saudi Arabia in order to construct towns for Palestinians. They want to displace and transplant about five million Palestinians to other countries in order to undermine the issue of Palestine as the land of all Muslims”, Raeisi said.

He emphasized “US, GB and their supporters have to know that they are the only losers of this deal.”

Elsewhere in his remarks, he said “our Leader believes that no war will happen against Iran, since enemy’s strategy had been failed before, during the eight years of Iran–Iraq war. That’s why they keep pressure on Iran to negotiate in order to undermine the regional penetration of Iran”.

The previous presidency candidate of Iran pointed to internal roots of economic problems of Iran and asked for economic change and development in the country, in addition to inviting youth to participate in various aspects of the Iranian economic field, as the best way for challenging US economic pressure.

He criticized secular approach to mosques and condemned intentions for keeping mosques far apart from politics, saying enemy is no longer able to propagate secularism in our community.”