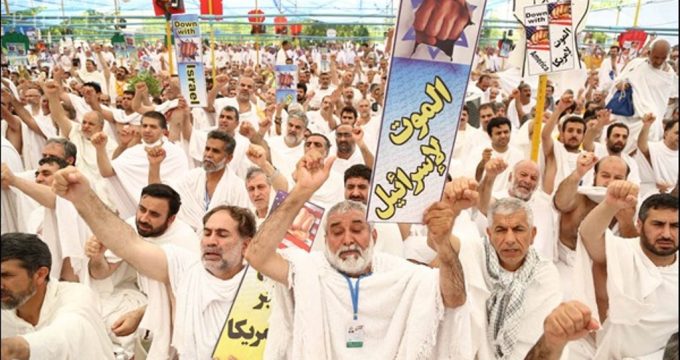 IRNA – Thousands of Iranians along with pilgrims from other countries held on Monday the Disavowal of Pagans ceremony in Arafat Desert, 20 km southeast of holy city of Mecca in west of Saudi Arabia.

The ceremony started after a message to the annual Hajj congregation by the Supreme Leader of the Islamic Revolution Ayatollah Seyyed Ali Khamenei was read out to the pilgrims who later chanted anti-US and anti-Zionist slogans.

The ceremony was attended by the Supreme Leader’s Representative for Hajj Affairs Hojjatoleslam Ali Qazi-Asgar, Head of Iran’s Hajj and Pilgrimage Organization Hamid Mohammadi and a large number of Iranian pilgrims.

During the ceremony, the pilgrims voiced out the preservation of Muslims’ unity and solidarity and the fight against enemies’ anti-Islam plans.

Participants of the ceremony chanted ‘Allah o Akbar (God is the Greatest} while condemning any compromises with pagans and arrogant powers.

More in the ceremony, the pilgrims will offer the Arafah Prayer which was recited originally during the Hajj at Mount Arafah on 9 Dhu al-Hijjah by Husayn ibn Ali, the Grandson of Prophet Muhammad (PBUH) and the third Imam of Shiite Muslims.
On day of Arafah, Shia Muslims go to holy places such as mosques and graves of Shi’a Imams to recite Arafah prayer.

About three millions of Muslims departed for Arafat Desert late on Sunday.

Tuesday morning coincident with Eid al-Adha in Saudi Arabia, pilgrims will be headed for Mina in eastern Mecca, and will stay there till Thursday to performe the ‘Stoning of the Devil’ ritual at Jamarat.